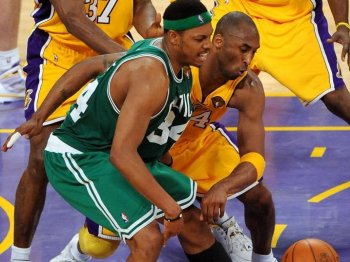 Dan Pomerleau
View profile
Follow
biggersmaller
Print
The Boston Celtics and Los Angeles Lakers are poised for a Game 7 showdown in the 2010 NBA finals at Staples Center in L.A. on Thursday—a matchup both franchises have seen before.

This is the fifth Game 7 between the league’s most storied franchises, and their 12th NBA finals matchup overall. It doesn’t get any better than this for basketball aficionados.

“I guess it’s going to be another decade that people look back and see the formation of this rivalry again,” Lakers coach Phil Jackson told the Associated Press. The 1960s and 1980s were the two previous decades when the Lakers and Celtics rivalry flourished.

Just two years ago the Lakers and Celtics met in the finals and the Celtics clinched the championship in Game 6 in an embarrassing 131–92 rout.

The Lakers rebounded in 2009 with a championship over the Orlando Magic, but they have never beaten the Celtics in their five Game 7 finals matchups.

Still, it’s nothing to fret over for Lakers fans.

Los Angeles has home court advantage, the guidance of a veteran coach with a 47–0 win record in playoff series when winning Game 1, and a 22-point rout of their own with their Game 6 demolition of the Celtics 89–67 on Tuesday.

They’ve also got the advantage of facing a wounded team.

The Celtics lost their starting center Kendrick Perkins to a right knee injury in the first quarter of Game 6. Perkins showed up to practice on crutches on Wednesday and will be receiving an MRI this Friday and possible surgery for a torn medial collateral ligament.

“I have to watch from the sideline. I’d be lying if I told ya’ll it didn’t hurt, but it hurts,” Perkins said.

The big man with the icy stare has only averaged 7 points and 6.8 rebounds against the Lakers in this series.

But he adds a menacing, tough-armed defense that has been critical at limiting the Lakers’ Andrew Bynum and Pau Gasol. The Celtics better be hoping their meltdown on Tuesday was not a direct result of Perkins’s absence; Gasol nearly had a triple double in that game.

Boston is going to need all of their big three and Rajon Rondo to put on a performance of the season if they are going to stand a chance against L.A.’s surging Kobe Bryant and Gasol at home.

Bryant has led the series in scoring averaging 29.5 points per game and has the athleticism, superstar talent, and competitive drive to make Game 7 a nightmare for Boston.

One answer for Boston—the only really—is for Ray Allen to completely break out of his shooting funk and for Paul Pierce to have the game of his life.

The Celtics got manhandled in the paint on Tuesday and were out rebounded by the Lakers 52–39; the first half was particularly bad.

“I just love the pressure,” Pierce said. “I love the fact that I get to play against the Los Angeles Lakers in a Game 7 on the road.”