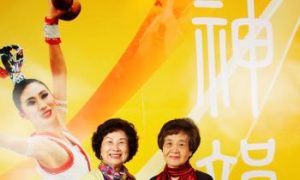 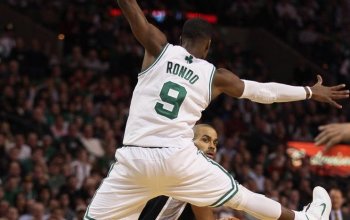 Rajon Rondo gave the San Antonio Spurs no place to go on Wednesday with a stellar performance. (Elsa/Getty Images)
NBA

The Boston Celtics (27–7) handed the NBA-leading San Antonio Spurs (29–6) another tough road loss on Wednesday night 105–103 after the New York Knicks beat them 128–115 at Madison Square Garden on Tuesday.

“We’re not going to keep up this pace, that’s for sure. It’s not going to happen,” Spurs coach Gregg Popovich had said before the Knicks game. He was right then, and doubly right on Wednesday.

It was an all-out battle between the NBA’s top teams at the TD Garden; the Celtics briefly led by as much as nine points and the Spurs led by as much as five points in a game that saw several lead changes until the final minutes.

Rajon Rondo had an all-around stellar performance for Boston with 22 assists, 12 points, 10 rebounds, and 6 steals as he deftly ran the Celtics offense. The speedy point guard even got in a blocked shot to add insult to injury.

In the first three quarters Allen made Manu Ginobili look like a rookie until Ginobili came alive in the fourth quarter to score an amazing 20 points for 24 on the night to lead the Spurs.

The Celtics got out to a quick 12–5 lead in the first quarter before the Spurs evened the scoring in what would be a close quarter.

Allen had the hot hand for Boston, shooting 5–6 in field goals to lead in scoring with 10 points.

Ginobili couldn’t seem to effectively guard Allen, and had a hard time getting involved in the Spurs offense, shooting 0–2 from the field and scoring only one point off a free throw.

Glen Davis—in the starting rotation for the injured Kevin Garnett—delivered eight first quarter points for Boston, and the entire Celtics starting lineup got on the board.

The Spurs, conversely, were carried by reserve shooting guard Gary Neal and reserve forward-center Matt Bonner, who combined for half of San Antonio’s first quarter points.

Nate Robinson started the second quarter shooting well, draining a 3-pointer and then making an 18-foot jumper from the left wing to help quickly give the Celtics a good lead.

But the Spurs would take the lead back, going up by as much as five points until Paul Pierce tied the game at 47–47 with one minute to go in the first half.

The Spurs closed the half up 51–49, with Tony Parker and Bonner leading the scoring with 12 points and 10 points, respectively.

Boston was carried in the first half by Allen and Davis with 14 points and 11 points, respectively, and Pierce scored 9 points after coming alive at the end of the half.

The third quarter continued much the same as the first half with very close scoring until the end.

The Celtics went on a 16–7 run to go up by seven points, and a 3-pointer by Allen, layup by Rondo, and dunk by Pierce on consecutive plays ignited the crowd.

The Celtics maintained their lead for much of the fourth quarter, but Ginobili came alive for the Spurs offensively to keep the Celtics from pulling away.

The Spurs eventually took the lead 92–90 with five minutes to go in the game off foul shots from a technical foul on Pierce.

Several lead changes ensued until a layup by Marquis Daniels, a 3-pointer from Allen, jumper from Rondo, and a steal and layup by Allen pulled the Celtics up by nine points with just under a minute to go in the game.

That should have ensured the win. But Boston’s defense collapsed and the Spurs quickly came right back when Ginobili drained a difficult 3-pointer and Parker stole the ball from Pierce to pull San Antonio to within four points with 40 seconds to go.

Another steal by Ginobili on Rondo that led to foul shots brought the score to within two points; Allen missed two foul shots to keep it that way with seven seconds on the clock. The misses were a complete shock since Allen is a career 89 percent free throw shooter.

In the end, Pierce blocked a 3-point shot attempt by Ginobili in the final seconds of the game to seal the Celtics win.