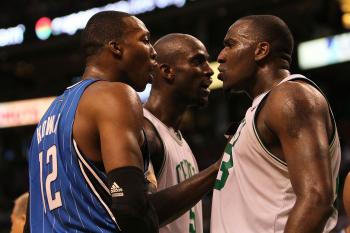 By Dan Pomerleau
Print
It seems there’s no stopping the surging Boston Celtics pursuit of an NBA championship.

First the Celtics delivered the league’s best team, the Cleveland Cavaliers, their worst home playoff loss in franchise history, and then sent King LeBron James and his team packing the game after.

Next the Celtics came away with two huge road wins against the Orlando Magic in Games 1 and 2 of the Eastern Conference Finals.

On Saturday, Boston iced the cake with an absolute rout of Orlando 94–71 in Game 3 in Boston.

You would have expected the Magic to come out with all guns blazing after suffering two losses at home and fighting for survival. But from the first few minutes you clearly could tell that was not going to be the case.

It was a classic example of one team just plain wanting it more.

“We were coming home for two games on our home court. We’re motivated. We can feel it,” Boston captain Paul Pierce said after the game. “Guys know what it’s like to win a championship and play for a championship.”

All of Boston’s power players were solid. Only Kendrick Perkins didn’t break double-digit scoring, but what the big man didn’t do on offense he made up for on defense.

Rajon Rondo had another great performance with 11 points and 12 assists, solidifying his role as the team’s new leader and arguably the league’s top all-around point guard.

“He’s playing with great focus. He has a great sense of what to call offensively,” Celtics coach Doc Rivers said of Rondo.

Led by Rondo’s quarterbacking, Boston wasted no time setting the tempo, opening a 16-point lead in the first quarter.

Contrary to the previous two games where the Celtics big lead was eventually closed by Orlando in the end, this lead held. It seemed Orlando’s spirit was crushed.

From the first quarter, the Celtics outshot, out rebounded, out defended, and more importantly out hustled the Magic, to the delight of Boston fans and to the frustration of Orlando coach Stan Van Gundy.

“It starts with me,” Van Gundy said. “It’s my job. I’m the coach of this team. It starts with me and I’m not happy with where we had our team tonight or anything I did.”

Van Gundy shouldn’t take all the heat for this one, though. Orlando leader Dwight Howard reached a new playoff low, shooting 3–10 in field goals and scoring just 7 points and grabbing 7 rebounds.

Howard may have been Superman against Charlotte and Atlanta, but he’s been playing more like Clark Kent against Boston. Or perhaps the strong-armed, no nonsense defense of Perkins has just been his kryptonite.

Either way, with Howard neutralized, there was little Orlando could do.

Jameer Nelson was kept to 15 points, as was veteran Vince Carter. Mickael Pietrus came off the bench with 12 points, but that was just about it for Orlando.

“This is a tough one to swallow,” Carter said. “To come out with a sense of urgency—I don’t feel like we really did that.”

Boston has a chance to sweep Orlando on Monday.