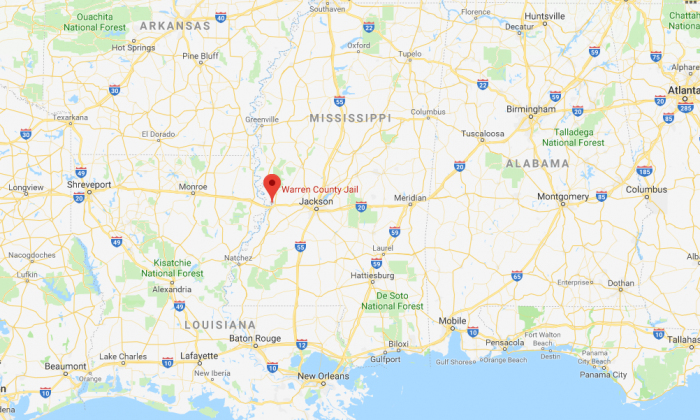 A fight between inmates at Warren County jail, Mississippi was captured by a cellphone and posted on Snapchat, reports said. (Screenshot via Google Maps)
Crime and Incidents

A disturbing video of an inmate being beaten on Wednesday afternoon, Dec. 28, put part of a Mississipi jail on lockdown, according to reports.

The dramatic footage, originally posted to Snapchat, shows the inmate being pulled out of a cell then repeatedly punched and kicked by other inmates in Warren County Jail. His face has swelling and he had gashes from the beating.

The inmate’s sister told reporters at CBS-affiliate WJTV-12 that he is shooting suspect Denzel Watts.

Watts is charged with five counts of aggravated assault in a Christmas Eve shooting at L.D.’s Restaurant and Lounge in downtown Vicksburg. His bond was set at $500,000.

According to local Mississippi news station, MS News Now, Watts was treated for his injuries and then released back into custody.

“He think my son stole his dope and he didn’t,” she said.

The news outlet reported that there are two ongoing investigations, one into the assault and another into the smuggling of the cellphone that captured the footage.

“The entire matter is under investigation and those responsible for the assault will face additional charges,” he said.

He added, “Those that were responsible for having possession of the cellphone in a cell block will face additional charges. It is a felony charge.”

According to WJTV-12, initially, the entire jail was on lockdown, then one cell block, where the fight took placed, remained on lockdown.

Sheriff Pace said that it’s too early to tell who will face additional charges, according to the Associated Press.