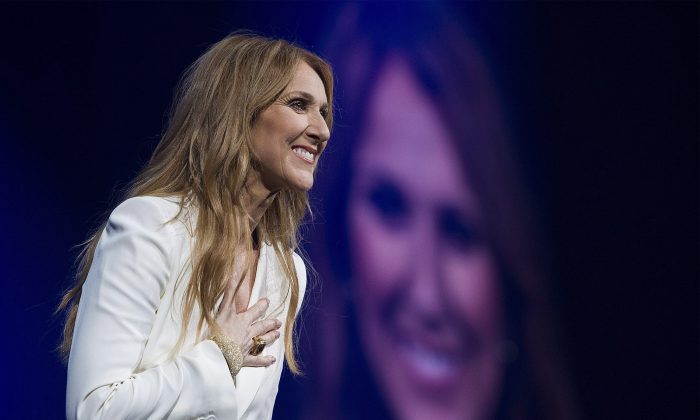 Celine Dion ‘Ecstatic’ to Be Home After Kicking Off Quebec Tour

MONTREAL—Celine Dion says she’s happy to be home and doing well after an emotional first Quebec show kicking off her Canadian tour on Sunday, July 31—just months after losing her husband to cancer.

The Canadian pop icon spoke at length to reporters in Montreal during a 90-minute early morning news conference Monday on the floor of the Bell Centre where she’ll be holding court for 10 nights.

It’s her first time back since the death of Rene Angelil, her longtime manager and husband who died of throat cancer at the age of 73 and whose funeral was held in Montreal in January.

“I have to stand strong for today and for my kids, for myself, [and] what’s to come for tomorrow.”

“Rene gave everything to me and wonderful children on top of the rest of my journey through the business,” she said. “I loved him too much to see him suffer the way he did the past three years, so I am very grateful that this part of his life is over with.”

Dion is playing 17 sold-out shows in Quebec this month—10 in Montreal, five in Quebec City, and two in Trois-Rivieres—before returning to Las Vegas.

She said she was “ecstatic” to be home, even a bit nervous and didn’t expect the welcome she got from a sold-out Bell Centre crowd Sunday night, calling it “over the top.”

Dion said she’s happy to be back in Quebec with family and friends, noting it’s the little things she misses most—fresh grass, green trees—a stark contrast to her home in the desert.

And of course the food.

Asked about an eventual full-time return to Quebec, Dion teased she’d like to have avoided the question because manager Aldo Giampaolo would be up in arms.

“The future is before us, everything is possible,” she said.

Among those in attendance on Sunday was her teenage son, Rene-Charles, who was reportedly getting a lot of attention from fans.

Dion says her eldest son takes it all in stride.

“I think R-C’s very smart, he knows that if he comes to a show, he’s going to be asked for autographs and pictures and people are going to recognize him,” she said. “I didn’t raise him onstage but Rene and I are in show business so he’s a show business kid in a way, and I think if it bothered him or if he was shy, he wouldn’t come.”

She thinks her eldest son may actually enjoy the attention.

“You don’t know how long it takes to fix his hair,” she quipped. “I think he’s got business in him.”

Her new album, “Encore un Soir,” is scheduled for release on Aug. 26.