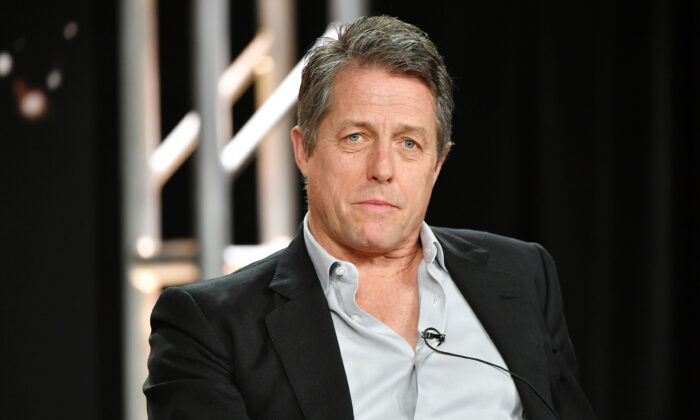 Hugh Grant speaks during the HBO segment of the 2020 Winter TCA Press Tour at The Langham Huntington, in Pasadena, Calif., on Jan. 15, 2020. (Amy Sussman/Getty Images)
Viewpoints

Celebrity Culture in the World of Woke

The world of “woke” is everywhere. It’s an ever-more oppressive and bullying imposition by progressive elites in every area of society—in academia, law, big business, sports, politics, schools, media, and broadcasting.

I want to discuss one of those spheres. Woke political correctness is not peculiar to celebrities. I’ve known many professors, students, even friends and relatives, who are afflicted with the condition. But the celebrity world of woke is particularly irritating.

The combination of wokeness and celebrity is toxic—it invades our lives in ways that seem inescapable unless we’re to stop watching television, films, or football, where we go to relax and enjoy life without being hectored about our beliefs in every other area of life.

There are growing signs of pushback against the hectoring, intimidation, and intolerance of the enlightened. We especially dislike it when those paid well to entertain us instead preach, posture, and scold. Celebrities in these cases presume an authority that’s not matched by knowledge of their subject or consistency between what they preach and what they do.

The fact that celebrities are themselves wealthy and privileged—part of what it means to be a celebrity—while denouncing the rest of us for our privilege and indulgence strikes many as hypocritical. The fact that film stars lecture us as if they were experts on climate or poverty, race or sex, even though they have no discernible special knowledge or expertise in those areas, also rankles.

Hugh Grant, to take one example, is a famous and accomplished actor, but he makes no attempt to hide his contempt for the majority of voters who supported Brexit and wanted to get it done. As Telegraph columnist Liam Halligan put it:

“’There goes the neighbourhood,’ tweeted Hugh Grant on election night, as Johnson secured his majority, embodying the patronising, anti-democratic attitudes of a cosseted liberal elite. The rest of the country, meanwhile, wants to roll up its sleeves and show that post-Brexit Britain can shine.”

Halligan shows how wrong the confidently gloomy predictions of celebrity “experts” like Grant have been and still are. Grant’s comment on the past month since Prime Minister Boris Johnson’s victory and the impending exit of the UK from the E.U. was, “The country’s finished.” Meanwhile, according to the International Monetary Fund, the British economy is thriving and growing faster than those of France, Germany, and the eurozone as a whole.

Fortunately, markets and votes put some limits on the bossiness of the woke.

In our family, we turn off shows that are too preachy. News media, such as the New York Times or CNN, that have become so partisan that they often seem like they’re mouthpieces of the Democratic National Committee lose audience share. People find other news media that don’t patronize or insult them.

There are widely followed “counter-celebrities,” such as Jordan Peterson or Ben Shapiro, who discuss controversial issues calmly and rationally, even in the face of anger, irrationality, and attempts to silence them.

The pushback against the woke culture of intolerance and secular-progressive conformism also takes political forms.

The Trump administration has emerged as a champion of religious freedom and of freedom of speech on campus. Both Donald Trump and Johnson were elected against the near-unanimous opposition and hostility of the woke establishment, including the media.

Both have subverted the dominance and privileges of media by relentlessly partisan establishment. Both have found their own ways to disseminate their message to the public unmediated by a hostile, woke traditional media such as the White House press corps or the BBC.

No one has made the point about the ignorance and hypocrisy of woke celebrities more sharply and publicly than British comedian Ricky Gervais in his opening monologue at the 2020 Golden Globes ceremony.

He struck a chord with millions who are tired of being lectured and scolded by the wealthy woke. He summed up their hypocrisy and ignorance with some classic advice for those who happened to be winners that night. The advice was widely ignored by the stars, but cheered by millions who watched his speech—or at the least that part of it—on YouTube or video clips in news reports.

Gervais advised: “If you do win an award tonight, don’t use it as a platform to make a political speech. You know nothing about the real world. Most of you spent less time in school than Greta Thunberg.”

A few days after Gervais’s scorching monologue, on Jan. 8, Prince Harry and Meghan, the Duke and Duchess of Sussex, unilaterally announced their “progressive new plan” to modernize the monarchy. They came under criticism from a British public who saw how they were presenting themselves as typical woke celebrities.

The couple planned to continue lecturing the public that was supporting them about poverty and the environment. They would cut back on their royal duties while creating a business empire as other celebrities had—for example, Oprah Winfrey, Jennifer Lopez, and Gwyneth Paltrow. Unlike those other stars, Meghan and Harry, sometimes unkindly referred to as the Duke and Duchess of Woke, planned to use their royal name to promote their brand, Sussex Royal, and their causes.

As it quickly emerged, Her Majesty was not amused. The Queen, as detailed in The Telegraph, rejected almost every element of the plan. The couple would no longer represent the Queen in any capacity or use their HRH titles. The planned combination of Britain’s most-revered institution with the woke culture of celebrity was not to be.

The woke culture intrudes into every sphere of life. It pervades and corrupts everything it touches. It seems like a juggernaut—merciless, destructive, and unstoppable—that grows ever more monstrous in its extremism and intolerance. Yet resistance is not futile.

Ordinary people resist with their votes and their consumer choices. Celebrities themselves, even comedians and sports figures, sometimes break ranks and reject or ridicule the ignorance, elitism, and hypocrisy of the woke.

The Queen herself, in mild and diplomatic terms, stands firm in defending the institution she heads, while wishing the errant couple well in their future endeavors.