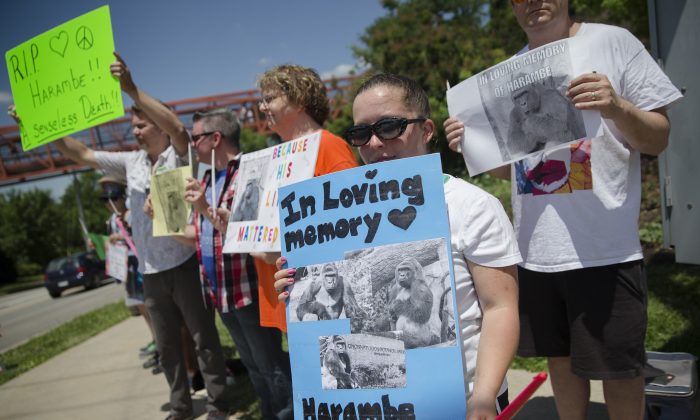 Kate Villanueva of Erlanger, Kentucky, center right, holds a sign depicting the gorilla Harambe during a vigil outside the Cincinnati Zoo & Botanical Garden, Monday, May 30, 2016, in Cincinnati.Harambe was killed Saturday at the Cincinnati Zoo after a 4-year-old boy slipped into an exhibit and a special zoo response team concluded his life was in danger. (AP Photo/John Minchillo)
US

Celebrities React to Killing of Gorilla in Cincinnati Zoo

It wouldn’t be public outcry if celebrities weren’t voicing their opinions.

After Cincinnati zookeepers killed a gorilla after a child fell into the enclosure, people set up memorials for the gorilla, and a number of celebrities protested the killing on social media.

shame on those for the murdering of #Harambe

It saddens me to no end that a gorilla had to be put down because of an irresponsible parent. However you look at it, that’s just sad.

BREAKING NEWS; Police say the Gorilla had Gang ties and was fleeing the scene…

Oh the poor gorilla,he did nothing wrong,if you watch the video,so sad..as a mother I would’ve jumped in too.

“normancookRIP #harambe Im sure I will get tons of backlash (per usual) I mean let’s be honest, I wear the wrong sweatpants and the entire world has something to say about it, but once again , another senseless horrendous animal being killed over people not using their brains. If you watch the footage, you see this gorgeous animal holding that child’s hand. Do with that ,what you will. As sad as this makes me, a part of me is happy for that amazing creature doesn’t have to live in captivity another day. Bring on the hate!!!!”