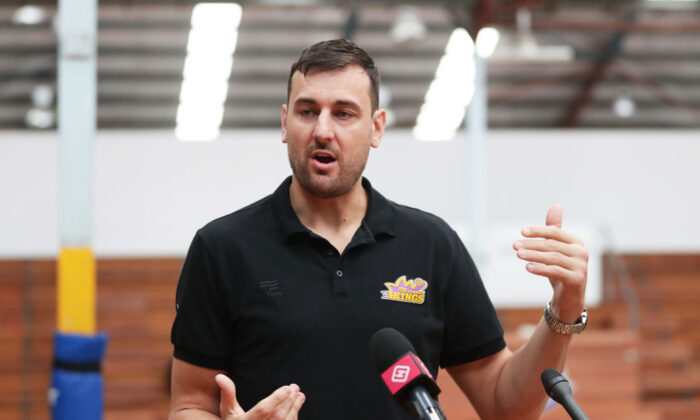 Australian basketball legend and former NBA player Andrew Bogut says athletes and celebrities have told him secretly that while they disagree with government-mandated health restrictions, they are essentially muzzled from speaking out.

In an interview with The Epoch Times on Oct. 5, Bogut said after he publicly spoke out against lockdowns and called on influential Australians not to be silent, he received an outpouring of support from athletes and celebrities telling him, “I’d love to speak out, but our league, my boss, my movie set … We just can’t. We would get shut down if we did from the government.”

Bogut, who is a former National Basketball Association player (2005 to 2019) with teams like the Milwaukee Bucks, Golden State Warriors, and Los Angeles Lakers, released a video in August on Instagram saying he had been propositioned to make a public service announcement to encourage Australians to comply with government-mandated lockdowns.

But he was uninterested, and was in fact, frustrated at the financial hardship that lockdowns were causing.

“My father would not have been able to survive in this current climate, period. Who pays the mortgage? Who would have paid the loan on the car?” he said in the video, which has garnered over 500,000 views.

“I’m a pretty outspoken guy on most issues,” Bogut said. “When I’m asked a question—even if I’m not an expert—I’ll give an honest answer of what I think. And I guess this is the same thing, but I’ve doubled down because I see the effects.”

He said he was not trying to diminish the effects of the virus. Instead, what was “most sickening” to him was the increasing divisions in society because of people’s stance on the lockdowns and vaccines.

“If you’re hesitant about getting the vaccine, you’re called an ‘anti-vax Nazi,’ and it goes the other way as well, where people who have had the vax are labelled ‘pro-vaxxers’ or government shills,” he added. “It’s just dividing the community, and that’s a win for the government.”

Bogut questioned why highly restrictive lockdowns were still being used when residents were also forced to comply with a bevy of restrictions, including social distancing, capacity limits in venues, and mandatory mask-wearing.

“You know you’re in an airport, for instance, and you’re standing on those social distancing stickers to check into your flight, and then you go on the plane, and you’re literally jammed like a pretzel with other people. So, there’s a lot of hypocrisy, and these restrictions and mandates are not working, and I think a lot of it is theatrics,” he said.

“I think the governments have gone so hardcore with COVID-zero, and they can’t turn back now because politically, a lot of these politicians are in too deep,” he noted. He called on political leaders to be upfront on mistakes in handling the pandemic and be prepared to switch gears.

He was also disappointed in the number of Australians who continued supporting heavy government intervention in society.

Bogut lives in Melbourne, which has just broken the world record for the longest locked-down city in the world, as of Oct. 4,—at 246 days—eclipsing the record set by Argentina’s capital Buenos Aires.

Australia has enjoyed some of the lowest infection and death rates from COVID-19 by global standards. This, in turn, has spurred state and territory leaders to readily lock down entire cities and close domestic borders at any sign of infections in the country—which has proven politically popular.

The Victorian government under Premier Dan Andrews has deployed a strict suppression strategy over the past 18-months to combat the virus, including imposing immediate “Stage Four” restrictions such as curfews, limits on movement within a 5km radius, and closing non-essential retail outlets.

In contrast, the neighbouring state of New South Wales (NSW) has largely steered away from using wide-ranging restrictions for the past year until the July outbreak of the Delta variant in Greater Sydney, which forced a policy change—NSW, however, is now the first state to set an official “Freedom Day” on Dec. 1.

Meanwhile, extended lockdowns and tough restrictions in Victoria have taken their toll, with protests breaking out in Melbourne with increasing regularity. Tensions have boiled over across the public service, with footage emerging of police officers using questionable tactics to apprehend protestors.

Bogut, whose family migrated from communist Yugoslavia, warned Australians of the need to be vigilant regarding the expanding powers of government.

“When you speak to an average Australian, who’ve never experienced conflict on their soil or have been sheltered from real world problems. They’ll tell you you’re crazy. How can you compare this to communism?” he said.

“I’d advise those people to go and speak to someone from the USSR or go speak to someone from the former Yugoslavia or Cuba,” he added. “They’ll all have the same mindset that they’ve seen these small grabs for power by governments in increments, and then all of a sudden, a lot of your rights are taken away to the point where your next-door neighbours are dobbing [snitching] on you for having your grandparents visit, and that’s what we’re seeing today.”

“These people (political leaders) that are really heavy on the political side of this and taking away people’s rights because they won’t take the vaccine—they’re the same people that we’ve had to listen to about equality and protecting minorities for the last decade,” he said.

“So, there’s a bit of hypocrisy when you’ve been spruiking that for the last 10 years and now because you are pro-vaccine—and some people are not even anti-vaccine, they’re just wary—you begin labelling them.”

Dr. Tess Lawrie: COVID-19 Vaccines Cause Inflammation in ‘Every Organ and Tissue of the Body’