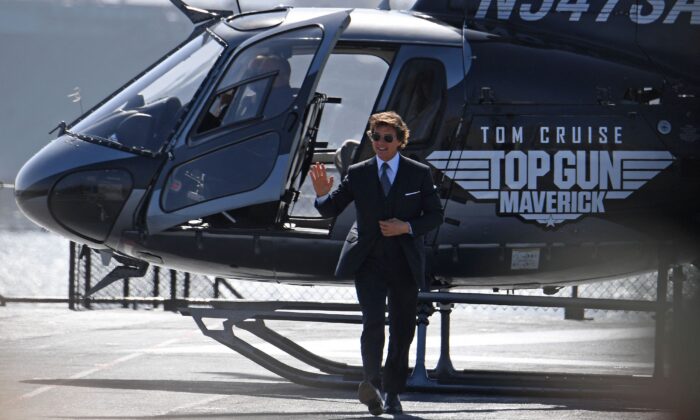 Actor Tom Cruise arrives in a helicopter to the world premiere of "Top Gun: Maverick" aboard the USS Midway in San Diego on May 4, 2022. (Robyn Beck/AFP via Getty Images)
Viewpoints

Conservative media are hailing the box office performance of “Top Gun: Maverick” as proof that the public is tired of woke movies. They report it may mark a return to movies we saw in the 1980s, when “woke” pertained only to sleep and it was OK to be proud to be an American.

But the celebration is unwarranted and likely to be short-lived.

In truth, “Maverick” is about as woke as you can get for a movie about U.S. Navy pilots. In the film, Tom Cruise’s Maverick character must choose the absolute best F/A-18 pilots in the Navy after a series of drills to lead a critical, world-saving mission. The cast all just happen to fit nicely into key diversity categories: a woman, a Hispanic man, and two black men.

The mission is to knock out a uranium enrichment plant in violation of world treaties. While it is fairly obvious that the country in question is Iran, at no time is the country identified. Apparently, producers have decided it isn’t politically correct to identify the adversary, perhaps out of fear of upsetting the Persian community (much as it is not politically correct to note the origins of COVID-19, so as not to upset the Chinese).

Or it may be due to TDS (Trump Derangement Syndrome). Trump was very tough on Iran, pulling out of the nuclear deal. Obama and Biden chose to trust the regime to live by a very weak agreement to keep it from developing nukes. Suggesting that Iran is, in fact, close to completing a dangerous uranium enrichment plant would have lent support to Trump’s position, a major faux pas in Hollywood.

The decision also may have been made to placate the Chinese, who are part of an axis of evil with Iran, Russia, and North Korea. We know that producers initially placated the Chinese by removing the Taiwan flag from the flight jacket worn by Maverick in the trailer for the film. The patch, along with a Japan flag, commemorated his father’s battleship tours to Japan and Taiwan during World War II. (After losing Chinese funding, and the politics surrounding Taiwan having changed with Russia’s invasion of Ukraine, producers were emboldened to allow the flag to appear on the jacket in the film. As a result, China may now ban the film.)

Finally, for a movie about the U.S. military defeating an adversary, there is surprisingly little patriotism in it. The movie has more of a superhero feel, part James Bond and part Star Wars. There is nothing honoring the sacrifices of our war veterans or celebrating America’s history of supporting freedom around the world.

While the film may be slightly less woke than much of what is coming out of Hollywood these days, it’s premature to celebrate. The film was shot in 2018. Considering the lightspeed of cultural change in America, that feels like a lifetime ago. It was also before the Academy of Motion Pictures implemented its new “representation and inclusion standards for Oscars eligibility.” According to the Academy, “The standards are designed to encourage equitable representation on and off screen in order to better reflect the diversity of the movie-going audience.”

Many of the greatest movies of all time would fail this standard. For instance, Best Picture award winners The Godfather and The Godfather II would fail it (no, Sicilians are not considered an underrepresented group.) A historical depiction of any event involving white males, say one of the Apollo missions, couldn’t meet this standard unless producers abandoned any attempt at historical accuracy. And, of course, the Academy’s push for “inclusion” only goes one way. It has no problem with an entirely minority, female, or LGBT cast.

Yes, record-breaking ticket sales for “Maverick” should be an indication to Hollywood of what people want to see. But it’s unlikely to get the message. Much like today’s Democratic Party, Hollywood is much better at pursuing a woke agenda than listening to the American people.