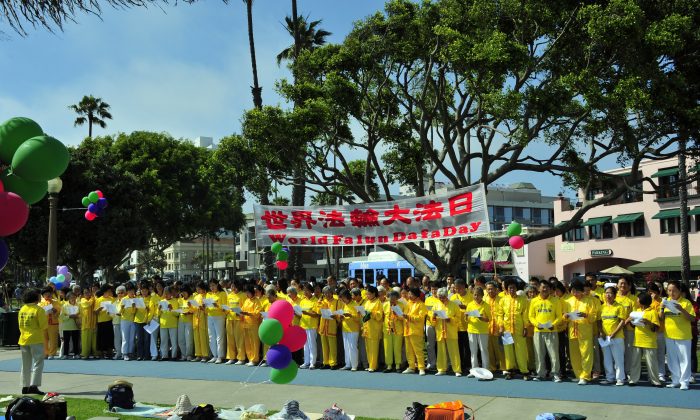 Over 100 practitioners joined in a chorus to sing songs, some of which expressed the hope their fellow practitioners in China would soon be free from persecution. (Robin Kemker/The Epoch Times)
China

LOS ANGELES—Practitioners of the spiritual discipline of Falun Gong—also known as Falun Dafa—gathered at the Santa Monica Pier Park on Saturday, May 11 for a celebration.

The occasion was Falun Dafa Day, which actually falls on May 13 and marks the date in northeastern China 21 years ago that Falun Dafa’s meditative exercises were first taught to the public.

Albert Roman, one of the event’s hosts, said, “There are many different types of qigong in China. What distinguishes Falun Dafa (also known as Falun Gong) is its emphasis on one’s xinxing, which translated to English means the nature of one’s heart, and is also referred to as one’s morality or character.

“What determines one’s character? This practice teaches that one’s character is determined by the extent to which one lives by the principles of truthfulness, compassion, and forbearance.”

Over 250 Falun Gong practitioners, including their family members, came to the park to demonstrate qigong exercises and participate in traditional Chinese and other cultural activities.

Falun Dafa is categorized as a qigong of the Buddha School. It is not part of the Buddhist religion, but It does, however, incorporate Buddhist principles for cultivating the body, mind, and spirit.

An exciting scene during the day was a Kung Fu demonstration. Kevin Yang, a Bronze Medal Winner at the 2011 NTDTV International Kung Fu Competition said after winning the 2011 Bronze, “Chinese marital arts is a big thing for Chinese culture, it’s a big part of Chinese culture. And, I’ve for the most part grown up in America, so to be doing something that’s so rooted in my culture, I definitely feel more connected to it.”

Hundreds of bystanders lined the surrounding area during the day to watch the various events.

Roman said that Falun Dafa became the most popular qigong in Chinese history. Introduced in 1992, more than 70 million people were practicing throughout the country 7 years later, in 1999.

The Chinese government and police initially praised Falun Dafa and its founder, Mr. Li Hongzhi, for the positive effects the practice had on society, Roman said. The minister of physical education lauded Falun Gong for its ability to improve the health of Chinese citizens, thereby reducing the nation’s health care expenses.

Practitioners closed the day by singing songs that echoed along Ocean Blvd. The music and lyrics were written over the past 21 years by practitioners. Some of the songs express feelings of thanksgiving, and others offer encouragement to the practitioners in China.

Persecution of the Practice

Many Chinese practitioners who have suffered persecution in China were present at the event. Though they were tortured and/or had family members and friends who were tortured or killed, they have remained faithful to the practice and its principles.

“Falun Gong practitioners have suffered severe persecution for the past 14 years; they have been illegally jailed, tortured, and killed.

“We are here to celebrate World Falun Dafa Day, and we are also here to raise awareness about this massive persecution of peaceful people happening now in China today.

“It is notable that, while there are well over 80,000 cases documenting torture and mistreatment of Falun Gong practitioners, there is not one case of a practitioner responding with violence. The scale of this nonviolent resistance is unprecedented and will be remembered.”