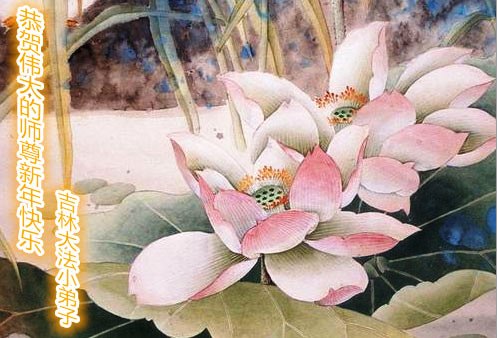 Celebrating New Year With Greetings to Founder of Falun Gong

In China and around the world, tens of thousands of Chinese have observed the New Year by sending digital greeting cards to Mr. Li Hongzhi, the founder of the spiritual practice of Falun Gong, also known as Falun Dafa. While addressed to Mr. Li, the cards, beautifully displayed on the Falun Gong website Minghui.org, also send a message to Beijing.

The sending of these cards has become an annual event. They typically express appreciation and gratitude to Mr. Li, addressed as “Master,” a title of reverence for a teacher in traditional Chinese culture.

Over 16 years ago, the odds did not seem to favor this joyful custom taking hold. The Chinese regime launched a campaign to eradicate Falun Gong, which the regime’s leader, Jiang Zemin, expected to take three months.

At the time, an estimated 100 million Chinese were practicing Falun Gong, whose adherents perform gentle exercises and live according to the principles of truthfulness, compassion, and tolerance.

The flood of colorful greetings from China is evidence the campaign against Falun Gong has failed. The cards come from all walks of life, and from all regions of China.

Steel workers in Tangshan, rail workers from Shanxi Province, oil workers from Chongqing, people working in the publication industry, bankers working at the Industrial and Commercial Bank of China, and steel workers from state-owned enterprise Sinosteel have all sent their own beautifully crafted greeting cards.

A person working for a cigarette company in Shandong Province wrote: “Greetings Master. In the upcoming new year, your disciple firmly believes in truthfulness, compassion, tolerance, as well as Dafa and Master.”

The taking up of the practice by members of the military and the security apparatus was one of the reasons Jiang Zemin feared Falun Gong.

In the greetings posted on Minghui are cards from the General Staff Department—the headquarters unit for the People’s Liberation Army, and soldiers and officers in the Nanjing Military Region, the Guangzhou Military Region, and the Bureau of Ordnance and National Defense, as well as retired military officials from Guangdong.

From the cities of Beijing, Shanghai, Tianjin, and Changchun, the city where Mr. Li first began teaching Falun Dafa in 1992, practitioners all wished Mr. Li a Happy New Year.

People who do not practice Falun Gong, including those from Shandong, Jiangsu, Hubei, Beijing, Liaoning, Heilongjiang, Suchan, Wuhan, Hunan, and other areas, either wished Mr. Li a Happy New Year or thanked him.

One person from Xianning, a city in southeastern Hubei Province, wrote: “After I learned the truth [about Falun Gong and the persecution], I know it was Jiang Zemin who started this persecution. And Jiang Zemin is the real criminal. And Jiang Zemin is the real culprit who breaks the law, causing so many people in China to misunderstand Master Li, as well as misunderstanding millions of wonderful Dafa disciples taught by Master Li. Master Li, I am here to give you my apology.”

Large numbers of Falun Gong practitioners remain locked up in detention centers, brainwashing centers, labor camps, or prisons in China. However, their captivity did not stop these practitioners from sending out greetings, including some from women’s labor camps in Fujian, Shanxi, and Hunan provinces, as well as individuals incarcerated in Xinjiang, Yunnan, Jiangsu, and Jinan provinces.