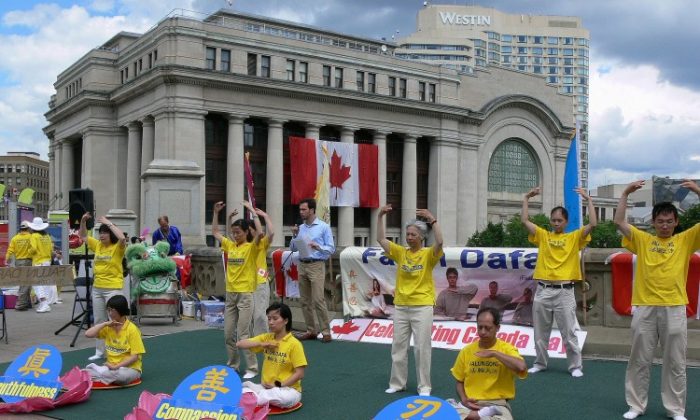 OTTAWA—Canada celebrated its 145th birthday on July 1, 2012, under a sunny, blue sky that shone on colourful, joyous festivities throughout the national capital region.

“This is our day to celebrate our 145th birthday, our day to be proud,” said Prime Minister Stephen Harper in a statement wishing all Canadians a happy Canada Day.

Harper first paid tribute to Queen Elizabeth II who has reigned through six decades as monarch in 2012. “It’s the Diamond Jubilee and I know we all want to send our best wishes to The Queen on her 60 years of service to our country,” he said.

“As Canadians we have much for which to be proud and thankful,” the prime minister noted.

“Proud of a strong and growing economy. Proud of a caring and compassionate society. Proud and ready to cheer on the young men and women who are headed to London, our Olympic and Paralympic athletes.

“And as always, proud of the bravery and devotion of our men and women in uniform.”

Harper highlighted the 200th anniversary of the War of 1812 this year.

“Almost exactly two centuries ago, an American invasion of Canada was launched. Our ancestors, English, French, aboriginal, people of all backgrounds, joined in the fight for Canada.

“It was during the War of 1812—the battle for Canada—that the very foundations of this great country of ours were laid. A country born in French, a country proud of its cultural diversity, stability and prosperity, a country, Canada, that stands apart in North America.

“In fighting together, our ancestors in 1812 laid the basis for a common sense of Canadian nationality based on diversity. And they laid the basis for the vision of freedom, democracy, and justice that is our inheritance, Canada, the best country in the world.”