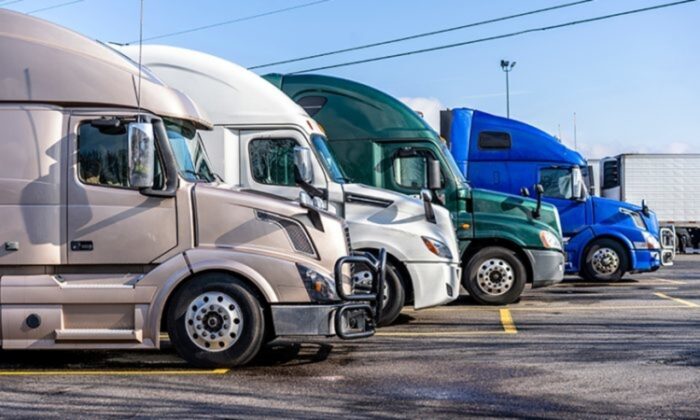 This undated file photo shows trucks lined up at a rest stop. (Shutterstock)
US News

Days after one of the largest trucking companies in the United States went bankrupt, drivers have described total chaos.

Celadon Group Inc. filed for Chapter 11 bankruptcy, affecting nearly 4,000 jobs. Some 3,000 drivers were suddenly left without a job, and in some cases, stranded after company gas cards were canceled, according to CBS News.

Jack Jones, a driver from Florida, told the Indianapolis Star that the news was abruptly broken to him while he was on the road, leaving him stranded.

“We found out two days ago. Now we have to get out of the trucks. I can’t even wait for anybody to come get me. I had to rent a U-Haul … We’re not even guaranteed to get paid,” he said in a video.

“The shutdown has caused a lot of confusion and aggravation to say the least,” trucker Bo Wells wrote, according to the Star. “All employers, and including drivers, have been kept in the dark until midnight (Monday) last night &— even us out here with loads.”

Wells noted that his truck serves as his home on the road, meaning that he’ll give to get rid of a few things should he take a Greyhound bus.

“At this time I have no idea of how I’m getting home,” he added. “This is catching all of us off guard. We all have too much stuff in our trucks to carry on a bus.”

Another employee indicated that he was caught off-guard by the news.

“I was told we were trying to turn things around,” recruiter Ernesto Gonzales was quoted by Yahoo News as saying. “We were continuing to hire right up until the very end.”

“Thousands of people didn’t get a severance package and that adds an extra sting,” Gonzales added. “The actions of a selfish few screwed over thousands.”

Yahoo reported that some drivers were told they had 20 minutes to clean out their trucks after the bankruptcy filing was announced. Drivers said they were forced to toss out personal belongings after getting GreyHound bus tickets because they were limited to what they could carry.

And some drivers told CBS that recruiters for other trucking companies have gone to Celadon’s premises and have offered jobs to recently out-of-work truckers. Some of the recruiters even offered food and bus tickets home to the drivers.

Good Samaritans on Facebook started groups to help former Celadon drivers who were stranded with food, showers, and a place to sleep, reported FastCompany. “If any driver around Bristol tn or glade springs va need help you text me [sic],” one person wrote, which was similar to many others.

Last week, CEO Paul Svindland, who bought the firm in 2017, said the company’s challenges have been too great to overcome.

“We have diligently explored all possible options to restructure Celadon and keep business operations ongoing,” he said in a statement. “However, a number of legacy and market headwinds made this impossible to achieve.”

He said the company “has faced significant costs associated with a multi-year investigation into the actions of former management, including the restatement of financial statements. When combined with the enormous challenges in the industry, and our significant debt obligations, Celadon was unable to address our significant liquidity constraints through asset sales or other restructuring strategies.”

Before the shutdown, the firm had about 3,300 tractors and 10,000 trailers, making it one of the largest trucking firms in the United States. Celadon also employs 2,500 truck drivers and 1,300 administrative employees, Business Insider noted.

Celadon’s former president and chief operating officer, William Meek, and the company’s former chief financial officer, Bobby Lee Peavler, were indicted on conspiracy and several other charges in April. The company had to pay $42.2 million to settle securities fraud allegations that stemmed from false reports of profits and assets, according to industry website FreightWaves.