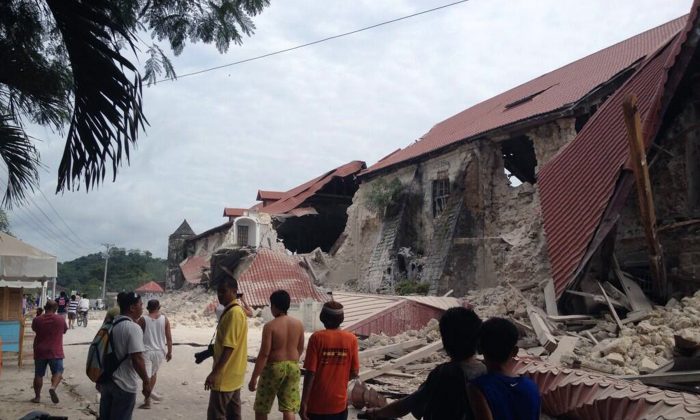 People walk past the damaged Church of San Pedro in the town Loboc, Bohol after a major 7.2 magnitude earthquake struck the region on October 15, 2013. (Robert Michael Poole/AFP/Getty Images)
Asia & Pacific

Cebu City, Bohol: All Classes Canceled for Wednesday After Earthquakes on Tuesday

All classes have been canceled in Cebu City and Bohol for Wednesday after a 7.2 earthquake hit the Philippines on Tuesday, followed by a series of strong aftershocks.

The Department of Education for the country said via Twitter on Tuesday morning that all classes for both private and public schools are canceled for Oct. 16  in Cebu and Bohol.

The earthquakes have caused severe damage, especially in Bohol, which was where the epicenter of the strongest quake originated.

Multiple churches, and numerous buildings, were destroyed or damaged in Bohol, and four people have died there. Another five people are confirmed dead elsewhere in the country, with the death toll expected to rise.

Another 10 people have been confirmed dead by the government, reported the Sun-Star.

Aftershocks are still happening more than two hours after the first quake hit, which was around 8:10 a.m. local time.

The Philippines is 12 hours ahead of Eastern Daylight Time.