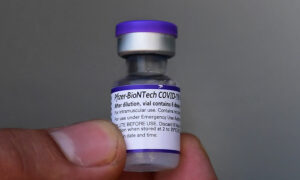 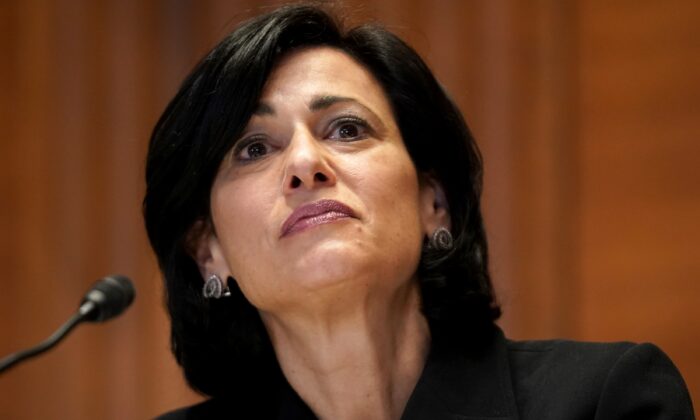 Dr. Rochelle Walensky, director of the Centers for Disease Control and Prevention, in Washington in a file photo. (Greg Nash/Pool/Getty Images)
Vaccines & Safety

The head of the Centers for Disease Control and Prevention (CDC) on Sept. 24 defended unilaterally overruling a panel of experts on which populations should be allowed to receive COVID-19 vaccine booster shots.

Dr. Rochelle Walensky, a Biden appointee who currently directs the CDC, accepted three recommendations on boosters from the agency’s advisory panel. But she rejected a recommendation not to allow boosters for 18- to 64-year-olds who are at a higher risk of being exposed to COVID-19 because of their job or living situation, even though some panel members said that could be interpreted to mean virtually anybody.

“I didn’t overrule an advisory committee,” Walensky told reporters during a virtual briefing about 12 hours after she overruled the panel.

A lengthy discussion then ensued on the final motion, with a majority of members rejecting it. Some said there wasn’t nearly enough evidence to support allowing people with certain jobs and living situations to get a booster. Others said that health care workers and other so-called front-line workers who are exposed to more people on a daily basis and who live with high-risk individuals or people who cannot get a vaccine, like a child, should be allowed to get boosters.

Walensky said she listened intently to the deliberations and described the vote as “a scientific close call.”

“In that situation, it was my call to make. If I had been in the room, I would have voted yes, and that was just how my recommendations came out after listening to all of their scientific deliberations. To the extent that people are concerned about confidence, I would say they should listen to the deliberations themselves. We did it publicly, we did it transparently, we did it with some of the best scientists in the country,” she said.

Meetings of the panel are streamed live online but aren’t available in an archived version for several weeks. The CDC didn’t immediately respond when asked how members of the public could access the recording to listen themselves.

Two members who voted against the recommendation declined requests for comment through spokespersons. The other seven didn’t immediately respond.

Vinay Prasad, an associate professor of medicine at the University of California–San Francisco, was among the critics of what unfolded.

“The CDC director, a political appointee, siding with the President, & his pre-ordained plan, against the advice of the ACIP advisors, with 0 [random controlled trials] measuring clinical outcomes & no idea of adverse events is not ‘doing one’s job’ it is politics [over] science, precisely what we feared,” he wrote on Twitter.

Geoff Porges, an analyst at SVB Leerink, wrote in a note that he expects several resignations from the advisory panel as a result of Walensky’s action.

Officials and panel members were united in supporting boosters for seniors. They say they’re needed because the efficacy of COVID-19 vaccines against severe disease and hospitalization is dropping among that population.

But CDC officials told the panel in presentations on Sept. 23 that the vaccines remain effective for younger people, and many members expressed doubt on the language later endorsed by Walensky.

Walensky and other government health officials have struggled to explain why boosters are needed for those under 65.

Walensky said the move reflects “the potential increase for severe outcomes,” especially among those with underlying conditions.

“We’re starting to see that data both here and in other countries,” she said.

The CDC didn’t immediately respond when asked for the data.

Dr. Anthony Fauci, the longtime director of the National Institute of Allergy and Infectious Diseases, summarized early data from Israel that has been garnered since the country cleared boosters in July and research conducted by scientists on behalf of Pfizer and its German partner BioNTech.

Safety issues were roughly the same as those seen after the second dose of the initial two-shot series, he said.

Fauci asserted later that people shouldn’t be fixated on hospitalization numbers because some people can contract COVID-19 and still have issues even if they’re not going to a hospital.

“I think that there is some misunderstanding that if you don’t get hospitalized, everything is okay. That’s really not the case. There are many people don’t get sick enough to go to the hospital who have a waning of immunity against symptomatic or moderately symptomatic disease, who have a rather major disruption in their life, and in their responsibilities,” he said.