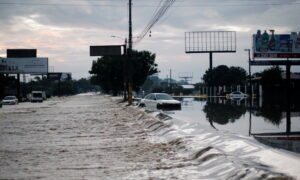 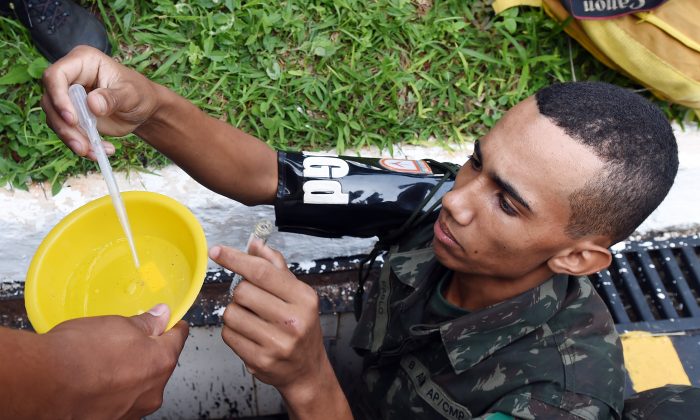 A member of the Brazilian armed forces looks for larvae of the Aedes mosquito, which transmits the Zika virus, at a school in Brazil, on Feb. 19, 2016. (Evaristo Sa/AFP/Getty Images)
Americas

JOAO PESSOA, Brazil—A 16-member team from the U.S. Centers for Disease Control and Prevention (CDC) kicked off work Monday on a study to help determine whether the Zika virus really does cause babies to be born with the devastating birth defect microcephaly, as Brazilian researchers strongly suspect.

Brazil’s health minister has repeatedly said he’s sure that Zika is causing the birth defect but international health agencies say there is not enough evidence to be certain.

“We have very limited information and we want to get more,” Cynthia Moore, a microcephaly expert with the CDC, said at a training session in the capital of the northeastern state of Paraiba, one of the epicenters of Brazil’s tandem Zika and microcephaly outbreaks.

She said “evidence is mounting” for a causal link between Zika and microcephaly, but myriad questions remain about how the virus may affect fetuses, the magnitude of the risk of infection and whether other factors may in involved.

Data collection is expected to last several weeks, researchers said, depending largely on how easily they can track down the babies with microcephaly and their families, many of whom are thought to live in remote rural areas of Paraiba, one of Brazil’s poorest and least developed states.

While 56 cases of microcephaly have been confirmed in Paraiba since the spike was first noticed in October, authorities are investigating another 423 suspected cases, according to Health Ministry data.

“There’s a lot of anxiety out there and people really want to understand what’s going on,” said Priscila Leite, who leads the Heath Ministry’s delegation. “We expect high recruitment numbers.”

It’s not yet clear how long it will take for results to be released, but Erin Staples, the epidemiologist who heads the CDC contingent in Paraiba, said partial results may emerge during the monthlong data collection phase.