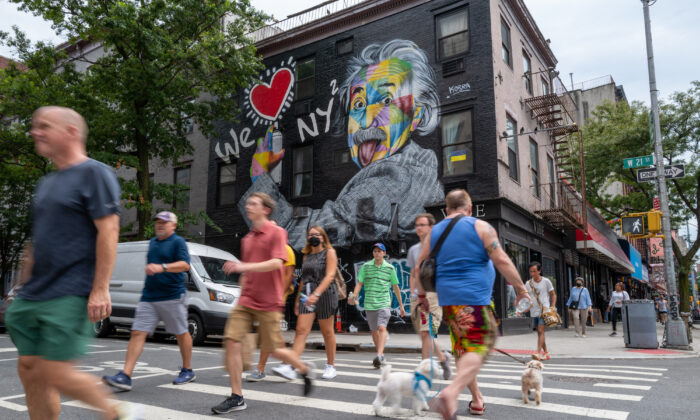 People walk through the Chelsea neighborhood in Manhattan, the heart of New York's LGBT community in New York City, on July 29, 2022. (Spencer Platt/Getty Images)
US News

The U.S. Centers for Disease Control and Prevention (CDC) on Friday updated its monkeypox advice to suggest people most at risk, namely men who have sex with men, “take a temporary break” from those behaviors to help “contain … the outbreak.”

Among the updates are suggestions that people “take a temporary break” from sexual activity until considered vaccinated; limit their number of sexual partners; avoid “spaces” for anonymous sex with multiple partners; use condoms; and wear gloves during particular sexual activities.

These five suggestions to reduce the chance of spread were added to the seven that appeared on the webpage when it was updated on July 12. In that previous update, the CDC offered suggestions for sexual activities for people who have (or think they have) “monkeypox and … decide to have sex.”

Friday’s update contains stronger messaging, with the CDC now saying “the best way to protect yourself and others is to avoid sex of any kind … while you are sick.” People should especially “avoid touching any rash.”

The updated advice appears on the CDC’s “Safer Sex, Social Gatherings, and Monkeypox” webpage which contains detailed and specific information tailored to lowering the risk of transmission during particular sexual activities.

“While CDC works to contain the current monkeypox outbreak and learn more about the virus, this information can help you make informed choices when you are in situations or places where monkeypox could be spread,” reads a statement on the webpage which wasn’t there in July.

“Monkeypox is not considered a sexually transmitted disease, but it is often transmitted through close, sustained physical contact, which can include sexual contact.”

The CDC has also advised people to consider the chances of skin-to-skin contact when attending festivals or raves.

“Festivals, events, and concerts where attendees are fully clothed and unlikely to share skin-to-skin contact are safer. However, attendees should be mindful of activities (like kissing) that might spread monkeypox,” the CDC webpage reads.

The CDC especially noted the increased risk of spread at these events in “enclosed spaces” where people go for “intimate, often anonymous sexual contact with multiple partners.”

The White House has identified a vital need for education about monkeypox and outreach to the LGBT community, which is most affected by the outbreak, in order to combat the virus.

White House press secretary Karine Jean-Pierre said Monday that there is a need to make sure the LGBT community and public health officials “know exactly what to look for and what the treatment is.”

The CDC’s updated suggestions come three days after President Joe Biden picked Dr. Demetre Daskalakis, who runs the CDC’s HIV prevention division, as one of two officials to lead the nation’s response to the monkeypox outbreak.

Daskalakis, who will be deputy to FEMA’s Robert Fenton, has expertise with issues that impact the LGBT community, making him an appropriate pick, according to Dr. Anthony Fauci, the White House’s chief medical adviser.

The 2022 monkeypox outbreak has so far primarily spread via the sexual activity of gay and bisexual men, a major study has found. The virus can also spread through contaminated bedding, clothing, towels, according to the CDC and World Health Organization.

After the United States’ fifth pediatric monkeypox case was reported in Long Beach on Thursday, a Californian health department has also said transmission can occur via household items such as cups and utensils.

The CDC’s updated webpage for safer sex amid the monkeypox outbreak noted that vaccines will be “an important tool in preventing the spread of monkeypox.”

“But given the current limited supply of vaccine, consider temporarily changing some behaviors that may increase your risk of being exposed,” the webpage reads. “These temporary changes will help slow the spread of monkeypox until vaccine supply is adequate.”

CORRECTION: This article has been updated with the correct states that have declared public health emergencies. The Epoch Times regrets the error.