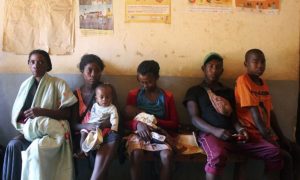 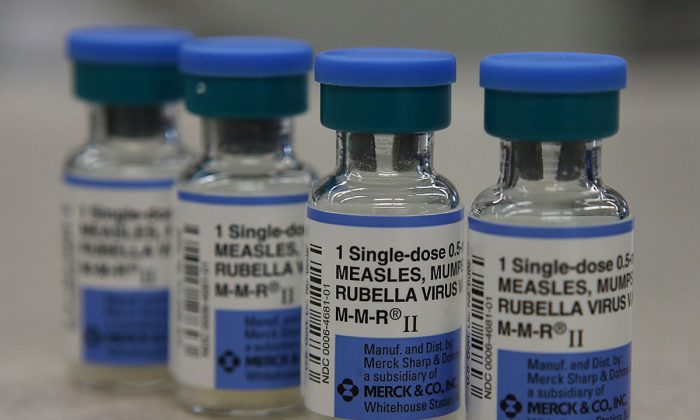 In this photo illustration, vials of measles, mumps and rubella vaccine are displayed on a counter at a Walgreens Pharmacy in Mill Valley, California, on Jan. 26, 2015. (Justin Sullivan/Getty Images)
US News

Measles cases have been reported across 30 states in the United States since the start of the year and the Centers for Disease Control and Prevention (CDC) says that travelers are continuing to bring the disease into the country.

The CDC reported 1,215 cases of measles from Jan. 1 to Aug. 22, 75 percent of which are linked to outbreaks in New York and New York City. Most of the cases were of people who were not vaccinated against measles.

“Measles is more likely to spread and cause outbreaks in U.S. communities where groups of people are unvaccinated,” said CDC in a release.

While the vast majority of measles patients are unvaccinated children, up to 10 percent of patients in the current outbreaks are adults who received only one of the recommended two doses of the live measles-mumps-rubella vaccine.

In updated numbers, the CDC now reports 1,203 U.S. cases so far in 2019 — the most cases reported in this country since 1992 and since measles was declared eliminated in 2000. https://t.co/JKn9nvWhoN pic.twitter.com/J4OGClgsFz

Out of all the reported cases, 125 people were hospitalized and 65 suffered from serious complications like pneumonia and encephalitis.

The CDC said that all of the cases reported this year were tested to be measles wild-type D8 or B3. The identification of the disease strains help with public health investigations.

“This is the greatest number of cases reported in the U.S. since 1992 and since measles was declared eliminated in 2000,” the CDC said.

The CDC said unvaccinated people traveling to regions where there are measles outbreak are at risk of getting infected.

“You are at risk of measles infection when you travel to areas where measles is spreading and have not been fully vaccinated against measles or have not had measles in the past,” the CDC said on its website.

It said the best way to prevent an infection is to get vaccinated. The CDC has specifically asked people to be vaccinated before embarking on an international trip given that disease outbreaks are happening in many countries around the world.

“If you are not sure, see your healthcare provider at least one month before your scheduled departure,” the CDC said in its travel notice.

Around 10 million people across the world get measles every year and in many regions of the world in Europe, Asia, Africa, Middle East and Americas, it remains a common disease.

The measles outbreak has reached 1,203 cases in 30 states in 2019, per the CDC. With the start of the school year, public health officials are concerned the highly contagious virus will be spread via unvaccinated children and college students.https://t.co/7MVPmuvpyR

“You should plan to be fully vaccinated at least 2 weeks before you depart. If your trip is less than 2 weeks away and you’re not protected against measles, you should still get a dose of MMR vaccine,” said the CDC.

Not long ago, measles was thought to be a problem that was mostly solved. The once-common disease became increasingly rare after a vaccine became available in the 1960s. In 2000, health officials declared the disease eliminated in the United States, meaning that all new cases stemmed from infected travelers and not from the homegrown transmission.

A decade ago, the reported cases numbered fewer than 100 a year. But this year, in addition to 2014 and 2018, has seen a jump in the number of known cases.

🇺🇸 The United States has seen its highest measles case count in 25 years.

Measles in most people causes fever, a runny nose, a cough, and a rash all over the body. A very small fraction of those infected can suffer complications such as pneumonia and dangerous swelling of the brain.

According to the CDC, for every 1,000 children who get measles, one or two will die from it.