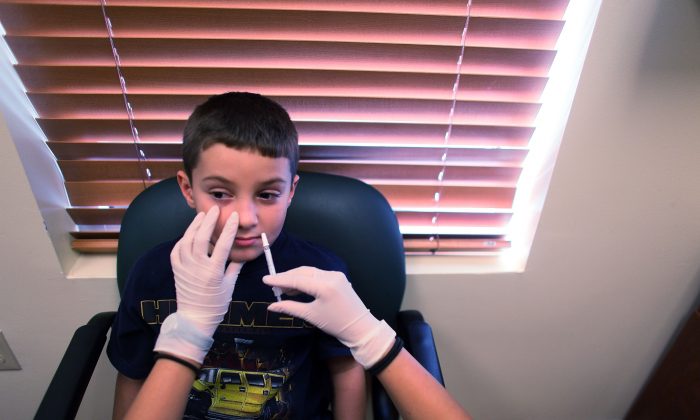 The Center for Disease Control and Prevention (CDC) announced on Wednesday, June 22, that FluMist vaccine, also known as the “nasal spray” flu vaccine, should not be used during the 2016-2017 flu season.

The nasal spray vaccine, as can be inferred by its name, differs from the standard flu shot in that it doesn’t use needles. After inhalation, the weakened live viruses in the spray trigger the immune system that learns to attack them, enhancing immune response.

CDC’s Advisory Committee on Immunization Practices (ACIP) voted against the spray, due to data showing low effectiveness between 2013 and 2016. The CDC briefly preferred during the 2014-2015 flu season.

Preliminary data on the effectiveness of nasal spray among children between 2 and 17 years old during the 2015-16 flu season became available from the U.S. Influenza Vaccine Effectiveness Network in late May. Results showed that the vaccine effectiveness (VE) among study participants was 3 percent, an estimate that means “no protective benefit could be measured.”

In comparison, IIV (flu shots) had a VE estimate of 63 percent against any flu virus among children in the same age range.

Data from non-CDC studies, as well as data from the past two years, support the conclusion of lower than expected vaccine effectiveness for the nasal spray.

The reason for nasal spray’s poor performance of late is unknown, though the CDC notes that a vaccine’s ability to prevent flu can vary widely from season to season, and is also impacted by a wide range of factors, “including characteristics of the person being vaccinated, the similarity between vaccine viruses and circulating viruses, and even which vaccine is used.”

The committee’s vote on nasal spray is expected to have implications for vaccine providers who have already placed orders. The CDC notes that about 175 millions doses of flu vaccine should be available for the United States during the 2016-2017 season. Roughly 8 percent of the total supply was projected to be nasal spray.

In addition, recent data show that nasal spray vaccine accounts for one-third of all flu vaccines given to children.

To counteract this loss, the CDC says that it will work with manufacturers throughout the summer to ensure sufficient supplies.

Whether FluMist stays on the market or not, the CDC stresses the seriousness of the influenza in its report, and, since 2010, has recommended an annual influenza vaccination for everyone ages 6 months and older.