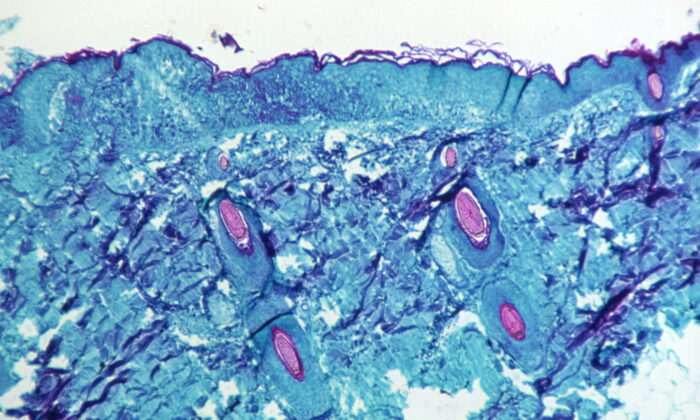 A section of skin tissue harvested from a lesion on the skin of a monkey, that had been infected with monkeypox virus, is seen at 50X magnification on day four of rash development in 1968. (CDC/Handout via Reuters)
US News

The Centers for Disease Control and Prevention (CDC) has revised its travel advisory related to the recent monkeypox outbreak around the world from Level 1 to Level 2.

According to an update posted to the agency’s website: “Cases of monkeypox have been reported in Europe, North America, and Australia,” adding that cases were reported among homosexual males. “Some cases were also reported in people who live in the same household as an infected person.

“None of these people reported having recently been in central or west African countries where monkeypox usually occurs, including the Democratic Republic of the Congo and Nigeria, among others,” the advisory continues.

Travelers should avoid close contact with sick people, namely those with skin lesions. They are advised to avoid contact with dead or living wild animals such as small mammals, rodents, and primates. The CDC also says that people shouldn’t prepare or eat meat from wild game in Africa.

“Contact with contaminated materials used by sick people (such as clothing, bedding, or materials used in health care settings) or that came into contact with infected animals” is also not recommended, the CDC adds.

While the agency concluded that the risk to the general population still remains low, it says people should seek immediate medical care if they’ve developed new and unexplained skin rashes and lesions with or without fever and chills.

Officials with the World Health Organization (WHO) have said that there are more than 200 monkeypox cases worldwide, although Sylvie Briand, the WHO’s epidemic and pandemic preparedness and prevention chief, said on May 27 that “we don’t know if we are just seeing the peak of the iceberg [or] if there are many more cases that are undetected in communities.”

“We are still at the very, very beginning of this event,” she said. “We know that we will have more cases in the coming days.

“This is not a disease the general public should be worried about. It is not COVID or other diseases that spread fast.”

Monkeypox, a relative of smallpox, is generally only seen in West and Central African countries. Initial symptoms include swollen lymph nodes, chickenpox-like rash, and a fever. U.S. officials have said that the smallpox vaccine can be effective in preventing the spread and transmission of the virus.

The pox-like lesions start out as dark spots on the skin before turning into bumps that fill with fluid. They will eventually scab over and fall off, possibly leaving people with scars or skin discoloration.