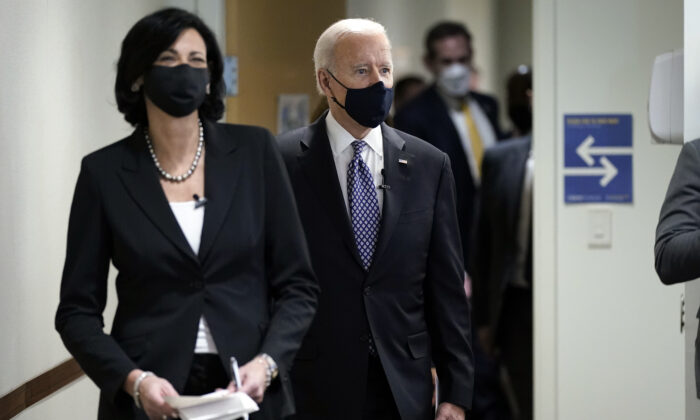 Dr. Rochelle Walensky, director of the Centers for Disease Control and Prevention, leads President Joe Biden into the room for a COVID-19 briefing at the headquarters for the CDC in Atlanta on March 19, 2021. (Patrick Semansky/AP Photo)
AMERICA

The U.S. Centers for Disease Control and Prevention (CDC) is no longer recommending universal COVID-19 case investigation and contact tracing, instead saying health departments should focus those efforts on specific high-risk settings.

The Feb. 28 update to the CDC guidance comes nearly two years after Robert Redfield, the agency’s previous director, told Congress that the United States needed as many as 100,000 people working as contact tracers to track the spread of the CCP (Chinese Communist Party) virus, which causes COVID-19.

According to CDC, a contact tracer was expected to quickly locate and speak with individuals who tested positive for the virus, find out who they have recently been in close contact with, and then notify those people about their exposure and encourage them to enter a 14-day quarantine to prevent further transmission.

The CDC now advises that state and local health departments should concentrate on “high-risk congregate settings,” such as long-term care facilities, jails and prisons, and homeless shelters. The updated guidance also states that case investigations should focus on cases and close contacts with exposures in the previous five days for those settings and groups at increased risk, such as those with underlying health conditions, pregnant women, and older adults.

“The updated guidance is in response to changes in the nature of the pandemic and the increasing availability of new tools to prevent transmission and mitigate illness,” CDC spokesperson Kristen Nordlund said on March 1, The New York Times reported.

The latest CDC data shows that the Omicron variant of the CCP virus has become the dominant strain in the United States, accounting for more than 95 percent of new infections for the week following the Presidents’ Day holiday. Compared with other variants, Omicron spreads more easily and generally causes less severe COVID-19 symptoms.

Recent studies also suggest that Omicron may have an average incubation period of three days, shorter than any other variant. The incubation period is the amount of time between when someone is exposed to a virus and when symptoms begin to emerge.

A paper published in December 2021 on Eurosurveillance, the scientific journal of the European CDC, describes an Omicron outbreak involving 80 attendees of a restaurant party in Norway. Most of those individuals were vaccinated and had received a negative antigen test result within two days before attending the event.

Symptoms such as fever started to show about three days after the party. Researchers said this could indicate that Omicron is able to multiply so quickly that negative antigen test results become meaningless.