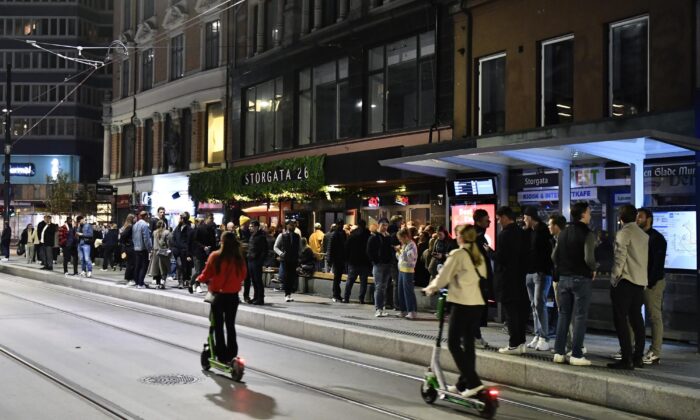 People out on the streets to celebrate the end of the COVID-19 restrictions, in Oslo, on Sept. 25, 2021. (Naina Helen Jama/NTB via AP)
Europe

The U.S. Centers for Disease Control and Prevention (CDC) this week listed Norway as a country with a “very high” risk of travel after the Scandinavian nation lifted its COVID-19 pandemic restrictions last week.

The CDC now designates the country “Level 4: COVID-19 Very High,” according to its website. “Avoid travel to Norway,” the CDC’s website said in an update Monday about Norway, the country with the highest human development index in the world. “If you must travel to Norway, make sure you are fully vaccinated before travel.”

Norway announced the removal of all its CCP (Chinese Communist Party) virus restrictions, prompting celebrations over the past weekend.

“It has been 561 days since we introduced the toughest measures in Norway in peacetime,” outgoing Norwegian Prime Minister Erna Solberg said on Sept. 24. “Now the time has come to return to a normal daily life.”

“We shall not have strict [CCP virus] measures unless they are professionally justified. People must be allowed to live as they wish,” Solberg told Norwegian newspaper VG over the weekend.

Her remark came as one of Norway’s top health officials compared COVID-19 to influenza and said that the country will not classify the virus as a dangerous illness in the near future.

“We are now in a new phase where we must look at the coronavirus as one of several respiratory diseases with seasonal variation,” Geir Bukholm, the assistant director for the Norwegian Institute of Public Health, told news outlet VG last week. “This is because the vast majority of those at risk are protected,” Bukholm said, referring to the country’s vaccination campaign.

With the announcement, Norway won’t mandate businesses to implement social distancing measures, and it will similarly allow certain venues and restaurants to operate at full capacity, the prime minister’s office said.

“We have lived a long time with strict measures at the borders. This has been important in combating imported infections. When we now move on to a normal everyday life, the government proposes a gradual reduction of the restrictions on entry into the country. This will take place under close supervision,” Minister of Justice and Emergency Management Monica Mæland said in a translated statement on the government’s website.

Earlier this month, neighboring Sweden made a similar announcement saying that on Sept. 29, restrictions on theaters, restaurants, stadiums, and related venues will be lifted.

The Epoch Times has contacted the Norwegian embassy in the United States for comment.