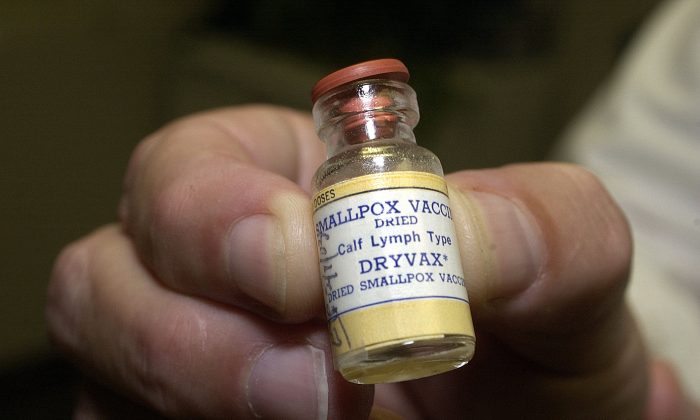 A vial of dried smallpox vaccination is shown at a facility in Altamonte Springs, Florida on Dec. 5, 2002. (Scott A. Miller/Getty Images)
Vaccines & Safety

Several vials with the label “smallpox” were discovered at a vaccine research facility in Pennsylvania, confirmed the Centers for Disease Control and Prevention (CDC) on Tuesday.

A CDC spokesperson told news outlets there is currently “no indication that anyone has been exposed to the small number of frozen vials.”

“The frozen vials labeled ‘Smallpox’ were incidentally discovered by a laboratory worker while cleaning out a freezer in a facility that conducts vaccine research in Pennsylvania. CDC, its Administration partners, and law enforcement are investigating the matter and the vials’ contents appear intact,” the federal health agency said.

Meanwhile, the laboratory worker who discovered the vials was wearing a face mask and gloves, the CDC spokesperson continued.

An alert that was sent out by the Department of Homeland Security on Tuesday night said the vials were found in a freezer at the Merck facility outside Philadelphia, reported Yahoo News. The discovery of the items prompted a lockdown of the facility.

“There is no indication that anyone has been exposed to the small number of frozen vials,” the CDC said in a statement to media outlets.

Smallpox, which has a mortality rate of about 30 percent, is an infectious disease caused by the variola virus, according to the Food and Drug Administration (FDA). The last naturally-occurring case of the virus was recorded in the 1970s, while U.S. and international health officials have declared the disease eradicated.

The World Health Organization (WHO) declared smallpox eradicated in 1980. The last known outbreak in the United States was in 1947.

Some governments are authorized to store samples of the virus for research, including at the CDC headquarters in Atlanta.

Employees of the National Institutes of Health in 2014 found six vials of smallpox in a storage room at the agency’s Bethesda, Maryland, campus. At the time, the CDC said there was no evidence that anyone was exposed to the virus.

“Smallpox was a terrible disease. On average, 3 out of every 10 people who got it died. People who survived usually had scars, which were sometimes severe,” the CDC’s website says.

Historians have estimated that a significant number of Native Americans were killed during smallpox epidemics. By 1832, the U.S. government established a smallpox vaccination program for Native Americans.

Both the CDC and Homeland Security have not immediately responded to a request for comment.