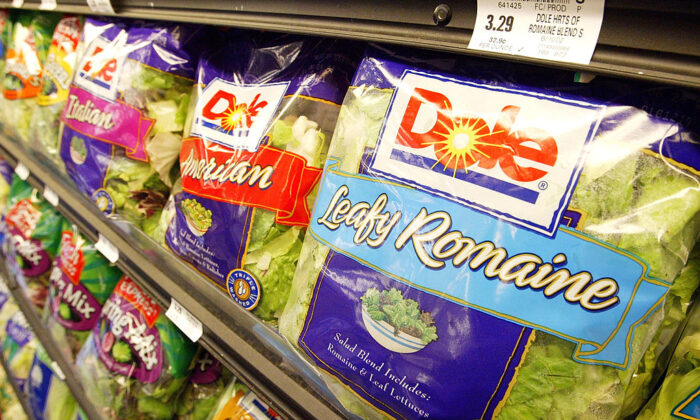 The U.S. Centers for Disease Control and Prevention (CDC) issued an alert saying a listeria outbreak tied to Dole salads is connected to the deaths of two people and has sickened 17 others across 13 states.

The salads, which were recalled by Dole in December, include a variety of different mixes. They were sold in either bags or plastic clamshell packaging, according to the agency, which said they include Caesar salads, mixed greens, and garden salads.

An active investigation is underway into how listeria, which can cause severe illness namely in older individuals and those with weakened immune systems, contaminated the salads, the CDC said.

For those who suspect they may have the salad in their refrigerators, the CDC recommends to “throw them away or return them to where you bought them.”

The agency further recommends that people clean their refrigerators, surfaces, or items that might have touched the recalled products as listeria can survive “in the refrigerator and can easily spread to other foods and surfaces.”

The CDC said that it is also investigating another listeria outbreak connected to Fresh Express packaged salads, which occurred in December of last year and led to 10 hospitalizations and one death.

According to the Mayo Clinic, a “listeria infection is a foodborne bacterial illness that can be very serious for pregnant women, people older than 65 and people with weakened immune systems.” It further notes that “healthy people rarely become ill from listeria infection, but the disease can be fatal to unborn babies, newborns and people with weakened immune systems.”

“Symptoms might begin a few days after you’ve eaten contaminated food, but it can take 30 days or more before the first signs and symptoms of infection begin,” it reads.