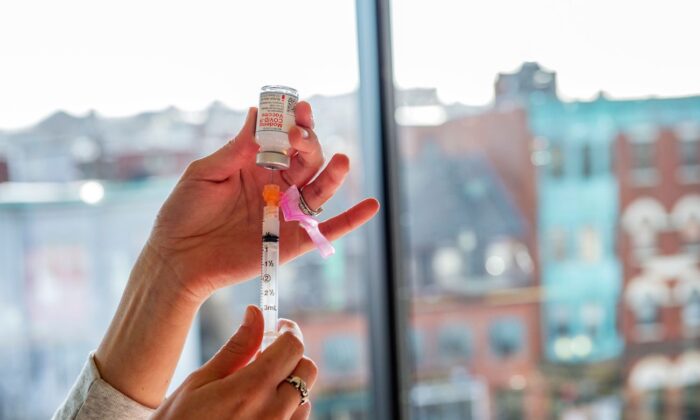 A nurse prepares a syringe with the Moderna vaccine in Boston, Mass., on Dec. 24, 2020. (Joseph Prezioso/AFP via Getty Images)
Vaccines & Safety

All 13 members of the Advisory Committee on Immunization Practices voted after hearing presentations from CDC officials on safety and efficacy data for the vaccine, which was approved by U.S. drug regulators on Jan. 31 a little over a year after receiving emergency clearance.

Dr. Beth Bell, one of the panel members, said her vote came after seeing the evidence that’s accumulated as millions of doses of the Moderna shot have been administered in the United States since its emergency authorization in December 2020.

“We can see the power and the value of vaccination. We continue to see the biggest risk to individuals is not getting vaccinated,” she said, adding that she hoped the endorsement would convince people hesitant about the vaccine to get vaccinated.

Many of the presentations detailed safety updates for the vaccine. Two types of heart inflammation, myocarditis and pericarditis, were identified as a severe side effect after authorization, and recent research indicates young people may be at more risk of developing myocarditis from the shot than COVID-19 itself.

Those studies weren’t mentioned during the virtual meeting, nor was a Food and Drug Administration analysis that estimated 148 cases of myocarditis per million for males aged 18 to 25—the highest figure a government agency has reported yet.

The document that revealed the results of the analysis was pulled offline this week, sparking outcry before being restored.

Instead, panel members were presented with a CDC analysis of reports of myocarditis submitted to the Vaccine Adverse Event Reporting System within seven days of vaccination. That analysis (pdf), done through Jan. 13, found about 6 cases per million after Moderna’s first dose among 18- to 24-year-olds, and 40 cases per million after Moderna’s second dose.

Moderna has a two-shot primary series.

Higher than expected rates of myocarditis were found among males as old as 50 years old, and females 18 to 29.

Several panel members expressed concern during the presentations, including Dr. Lynn Bahta, an immunization clinical consultant at the Minnesota Department of Health.

Pointing to a CDC survey (pdf) of health care providers who treated patients with post-vaccination myocarditis that found about half hadn’t “fully or probably recovered” by about four months after diagnosis, Bahta said, “That’s a long time for a person to maybe be with limited activity or may not be able to work or anything like that.”

Patients with myocarditis are often unable to participate in some or all physical activities, such as sports, along with other limitations.

Still, a CDC benefit-risk assessment (pdf) predicted many more COVID-19 associated hospitalizations would be prevented than post-vaccination cases of myocarditis among people aged 18 to 39, and advisers ultimately decided the benefits of the shot outweigh the risks.

Dr. Matthew Daley, a senior investigator for Kaiser Permanente Colorado, said he was still surprised at how well the vaccines have worked, noting that several studies have suggested they prevented up to 10.3 million hospitalizations and up to 1.1 million deaths through November 2021 in the United States.

“I still have a sense of wonder at what’s been accomplished here. That, and a deep sense of gratitude,” he said.

Outside the panel, not all experts agreed with the regulatory approval.

Dr. Peter McCullough, a cardiologist at Baylor University Medical Center, told The Epoch Times in an email that the approval “is not clinically justifiable nor supported by clinical data,” adding that a large, randomized trial with the Omicron virus variant should have been done to determine if the vaccine works well against the strain.

Omicron is behind about 99.9 percent of the COVID-19 cases in the United States, according to CDC sequencing data. It displaced Delta in December 2021.

Still, others said the approval made sense.

“You have to look at it from risk-benefit perspective. It’s proven to be highly effective with very tolerable risk and a very solid safety profile,” Dr. Peter Pitts, a former FDA associate commissioner who is now president of the Center for Medicine in the Public Interest, told The Epoch Times.

Pitts said the waning of antibodies seen over time and against Omicron isn’t ideal, but noted that the vaccines still appear to be holding up well against severe disease.