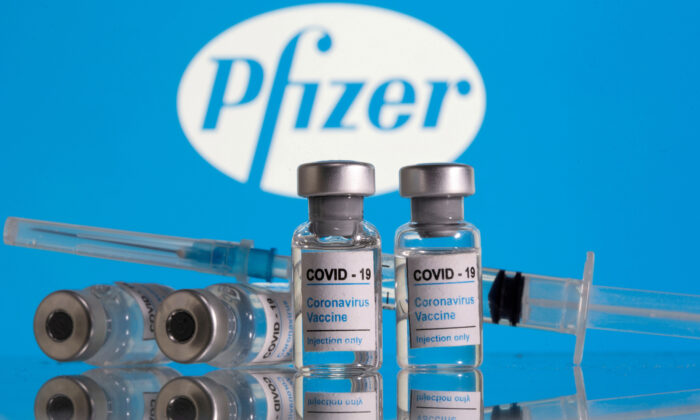 Vials labelled "COVID-19 Coronavirus Vaccine" and a syringe are seen in front of the Pfizer logo in this illustration taken on Feb. 9, 2021. (Dado Ruvic/Reuters)
By Ivan Pentchoukov

Nearly 400 children between the ages of 12 and 17 were diagnosed with heart inflammation after receiving the Pfizer-BioNTech COVID-19 vaccine, according to a study published by the Centers for Disease Control and Prevention (CDC) on July 30.

The condition, also known as myocarditis, occurred mostly in young boys, the study found. Heart inflammation wasn’t identified as an adverse reaction during the safety trials for the vaccine.

The CDC conducted the study by reviewing reports of adverse reactions to the Vaccine Adverse Event Reporting System (VAERS) between Dec. 14, 2020, and July 16, 2021.

Of the 8.9 million children who received the vaccine as of July 16, VAERS received a total of 9,246 reports of adverse reactions, 90.7 percent of which were made up of “nonserious adverse events.” The 397 reports of heart inflammation made up 4.3 percent of the total.

The CDC’s Advisory Committee conducted a risk-benefit assessment based on the adverse reaction reports and continues to recommend the Pfizer vaccine to children aged 12 and older.

Fourteen children died after receiving the Pfizer vaccine, according to the study. The cause of death still isn’t available for six of the cases. Of the eight other children, two died of intracranial hemorrhage, two died of pulmonary embolism, two committed suicide, one died of heart failure, and one died of a rare blood condition.

None of the death reports were determined to have been caused by heart inflammation.

“Impressions regarding cause of death did not indicate a pattern suggestive of a causal relationship with vaccination; however, cause of death for some decedents is pending receipt of additional information,” Anne Hause, the CDC’s corresponding author, wrote.

Hause noted that the study is subject to several limitations, including the fact that “VAERS is a passive surveillance system and is subject to underreporting and reporting biases.” Though the system is passive overall, doctors are required to report all serious events following vaccinations. The study also wasn’t designed to capture all cases of heart inflammation and only counted the reports which used the term “myocarditis.”

The Food and Drug Administration (FDA) issued an emergency use authorization for the Pfizer vaccine for children 16 years and older on Dec. 11, 2020. The FDA expanded the authorization to children 12 and over on May 10, 2021.

After reports of heart inflammation began to arrive in June, the CDC’s advisory committee concluded that the risks of high inflammation didn’t outweigh the benefits of the vaccine and decided to continue recommending it to children aged 12 and older.

Representatives for Pfizer and BioNTech didn’t respond to a request for comment by press time.