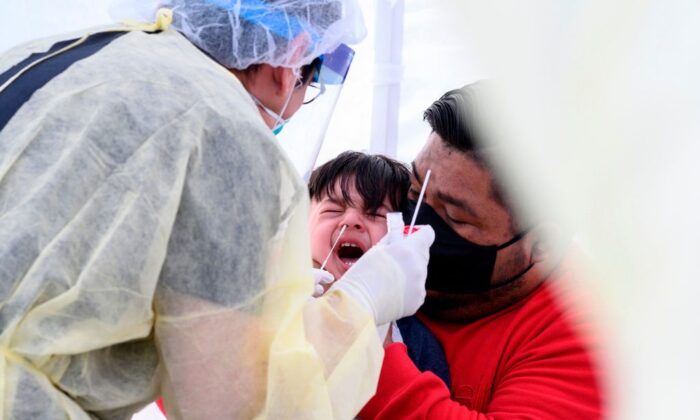 In a Feb. 16 tweet, the Centers for Disease Control and Prevention (CDC) said that a large percentage of nasal swab PCR tests for COVID-19 were ultimately subjected to genomic sequencing analysis, raising red flags among some people about the genetic privacy of individuals who took such tests.

Harvard professor Alberto Ascherio told Newsweek that those genomic sequencing analyses are of viral RNA, not human DNA, with the aim of tracking viral transmission as well as the emergence of new strains.

Yet, Ascherio acknowledged that human DNA could hypothetically be sequenced, as it is present on the swab as well—”which is probably what people may worry about if they are in [a] conspiracy mood.”

In a statement to The Epoch Times, a CDC spokesperson said only SARS-CoV-2 genetic sequences are analyzed for the swabs in question.

“A recent CDC tweet regarding genomic sequencing led some people to believe that personal identifying information was included in samples processed in the sequencing program,” the spokesperson said.

“That is not the case. Laboratories around the country examine viral sequences from positive samples which contain no personal identifying information. CDC analyzes SARS-CoV-2 genetic sequences from these labs to identify and compare variants, monitor their spread, and evaluate the potential impact on medical treatments and vaccines.”

The CDC’s comments come at a time of deepening wariness of pronouncements from public health authorities. A January 2022 survey from NBC News found that just 44 percent of Americans trust what the CDC has to say—a decrease from 69 percent in April 2020. While only 13 percent of Americans actively distrusted the CDC’s coronavirus messaging at that time, 43 percent actively distrusted it as of January 2022.

Trust in National Institute of Allergy and Infectious Diseases Director Anthony Fauci also fell during the same period, with the percentage of Americans who actively distrust his comments on COVID-19, the disease caused by the Chinese Communist Party (CCP) Virus, rising from 8 percent to 43 percent.

One factor in that distrust may be the dismissive attitude of public health experts regarding privacy. A few have argued publicly that falling trust in health agencies and growing resistance to data sharing actually justify the suspension of individual consent.

A September 2021 report from the University of Toronto, for example, applies this thinking to the adoption of track-and-trace applications, attributing many objections about the collection of this sort of data to “nebulous understandings” by the public:

“When individuals have been presented with opportunities to use smartphone applications to potentially facilitate exposure notification, such as in the United States and Canada, they often declined to do so,” the report stated.

“In practice, some residents of Canada maintained that their rights would somehow be infringed (often based on nebulous understandings of government actions), or they doubted the efficacy of the applications, or they lacked trust in the institutions that had developed them, and thus, they declined to volunteer even minimal amounts of personal information.”

Concerns have also been raised about the processing of genetic data by laboratories with ties to the CCP.

Beijing Genomics Institute (BGI) Global, a Chinese genomic sequencing company and global leader in sequencing, has operated COVID-19 testing laboratories around the world. In 2021, Reuters reported that the firm has carried out a range of research activities with the People’s Liberation Army (PLA).

The U.S.-China Economic Security Review Commission found that BGI has operated in various Western countries, including Canada, the United Kingdom, and the United States. In 2013, it purchased the U.S.-based firm Complete Genomics, giving it what the report describes as “a base of operations in the U.S.”

The report detailed BGI’s collaborations with the Bill and Melinda Gates Foundation, as well as numerous U.S. healthcare providers and other research institutions.

“In each case, U.S. institutions or companies benefitted by expanding their research capabilities and capacity, while BGI gained access to genetic sequence data as well as clinical data on people within the U.S.,” the report noted.

“Because BGI was providing sequencing and analysis services, they necessarily had access to health records and genetic data on individual patients; to what extent those data were de-identified is unknown.”

The Epoch Times has reached out to BGI Global for comment.

Anthony Graceffo, a professor at LeTourneau University, pointed out that a large percentage of COVID-19 test kits are made by Chinese companies such as BGI.

“BGI offered to do actual processing, which the U.S. government rejected—but I’m not convinced they’ve done due diligence on every lab that exists to make sure it’s not connected with China,” he said.

He later added that it would be very difficult to determine whether and to what extent the 10 percent of nasal swabs were analyzed by a company with ties to China.

Graceffo thinks the interagency Committee on Foreign Investment in the United States (CFIUS) must act to prevent investment by any Chinese firms in testing facilities.

He highlighted China’s increasingly stringent national security laws, which obligate citizens as well as companies to aid state intelligence work, even in a clandestine manner.

The 2015 National Security Law states that “citizens of the People’s Republic of China, all State bodies and armed forces, all political parties and people’s organizations, enterprises, undertakings, organizations and all other social organizations have the responsibility and duty to safeguard national security.”

Bioethicists contacted by The Epoch Times did not respond or declined to comment.

Correction: A previous version of this article incorrectly referred to viral RNA. The Epoch Times regrets the error.