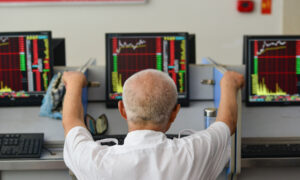 Eye-catching color graphics, headlines, subtitles, and photos have replaced the show’s original rigid format and stiff style.
The revamped program is broadcast nationwide every weekday morning, and has been extended from two-and-a-half to three hours. Producers are also aiming for “more balanced” coverage on domestic and international news.

The more zestful style, coupled with a new and youthful anchor, is intended to make the program more cutting-edge and appealing to viewers. It’s another step in CCTV’s attempt to revamp its news programming, aiming to win back viewers who have grown tired with dull and bureaucratic news broadcasts. Earlier in the month it updated its Evening News program.

A survey conducted by sohu.com on the day of the change showed that 50 percent of the respondents were pleased with the change. “It looks like a news program from Taiwan or CNN,” sohu.com reported. Some critics and “netizens” insisted that the revamped Morning News is an imitation of more famous international news bulletins, such as those seen on CNN, BBC, or even TVBS.

Communist Party media outlets are also being exported overseas, with CCTV rolling out Arabic and Russian language services for foreign audiences, repackaging and rebranding itself in the process.

Despite the Party’s attempts to modernize its message, critics abound. Zhan Jiang professor in the Department of Journalism at the China Youth University for Political Sciences’ and Communication, said that CCTV has very little news programs, and shallow content. Its service is directed toward government officials rather than the general public, he says, “As the form of presentation changes slightly, the general public may be excited for a while. However, since the content still remains the same, the station will lose viewers’ interest in the end,” he said to the Nanfang Daily in early July of this year.

He argues that CCTV has always held the information monopoly and has no motivation to change.

“The fundamental problem with CCTV’s daily news lies is systemic; it’s old fashioned, very official-looking, yet it also wants benefits on the business side, such as obtaining advertisements. Their main targets are officials and advertisers. Intellectuals are no interest to them. As time goes by, its problems are more and more exposed. For a TV station, the heavier official overtone, the less the audiences are willing to accept it.”

Earlier in 2009, twenty-two Chinese scholars published an open letter calling for a comprehensive boycott of CCTV. “We oppose the vulgar and propagandistic content on CCTV during Chinese New Year,” they wrote.

Xinhua has also established an English television network. Its trial broadcast began on July 1 of this year.