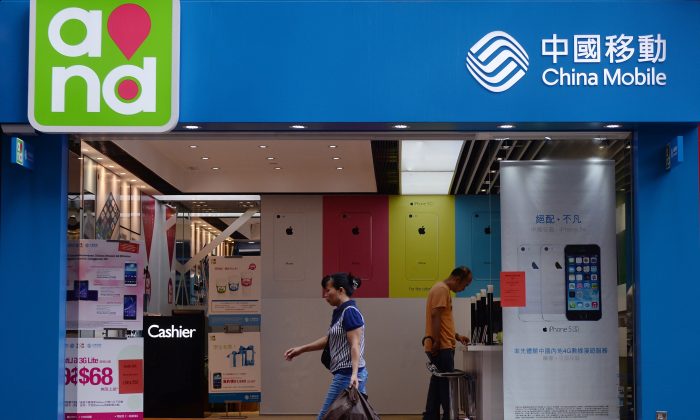 Right after former security czar Zhou Yongkang was expelled from the Chinese Communist Party, the Party mouthpiece China Central Television (CCTV) exposed the “robbery-like” service charges faced by customers of China Mobile. The two events are related, with the TV report being used as a warning signal aimed in the direction of former Chinese Communist Party head Jiang Zemin, one of his sons, and his faction, according to commentators.

On Dec. 5, the Xinhua News Agency announced that Zhou Yongkang had been purged from the Chinese Communist Party and would face criminal prosecution. On Dec. 6, CCTV reported that a large number of China Mobile customers have experienced charges from the company for services they had never requested.

The charges are mostly due to China Mobile clerks adding extra services without customer authorization, the report says. State-owned China Mobile is the largest mobile telecommunications company by market capitalization and, as of October, 2014, had over 801 million customers.

For instance, China Mobile customer Mr. Cao recently found that there were over 1000 yuan (US$163) of charges for value-added services such as reading, video, and entertainment packages. However, none of those services was requested by Mr. Cao, the report says.

After Mr. Cao called China Mobile customer service, they canceled those services and promised to return the money, but didn’t give an explanation for why these services were activated without his permission. However, only minutes after Mr. Cao’s call to cancel the services, several other services were opened on Mr. Cao’s account without him doing anything to it.

Such actions are “no different than stealing and robbery,” the report says. A local branch manager Mrs. Wang revealed that every China Mobile branch receives requirements every month, quarter, and year, to reach a certain number of openings for value-added services.

An anonymous staff member said China Mobile gives access to a group of managing level staff to operate customers’ accounts in large quantities without being restrained by customers’ passwords. The opening of over 47,000 value-added services were assigned to China Mobile’s Mudanjiang branch company for the month of February 2013, the report says.

The CCTV exposure is not only an attack to the reputation of China Mobile but also an attack Jiang Mianheng, Jiang Zemin’s son. Jiang Mianheng has been named a “pivotal figure in the telecom industry” by state-run Xinhua news.

At the end of 2009, Zhang was sentenced to death, suspended for two years, for economic crimes.

According to political commentator Xia Xiaoqiang, based in Washington D.C., the timing of the CCTV report on China Mobile was no accident. Everything CCTV broadcasts is strictly examined by Party officials, and so a report like this, coming at a sensitive time and implicitly criticizing a sensitive target—a member of Jiang Zemin’s family—could not be an accident.

By broadcasting the day after the announcement of the purging of the formerly powerful Zhou Yongkang, the CCTV report hinted at a connection between Zhou and Jiang Zemin, Xia said. It also serves as a warning to Jiang Mianheng that he is also being targeted.

Xia indicated that Zhou’s case is not an end to punishing former high officials, and the former paramount leader Jiang Zemin is likely to be another retired leader to stand trial in the future. The Chinese media is paving the way for it, he said.