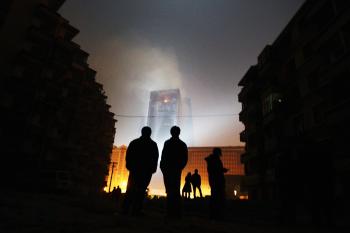 TOWER BURNS: People watch a fire at the unfinished The Mandarin Oriental hotel, that is part of complex that houses the Chinese Central Television's (CCTV) headquarters on February 9, 2008 in Beijing, China. (Feng Li/Getty Images)
China

Genevieve Belmaker
Genevieve Belmaker is a former reporter and editor with The Epoch Times.
View profile
Follow
biggersmaller
Print
Part of China Central Television's (CCTV) new headquarters building in Beijing went up in flames on Monday, according to news reports and eyewitness accounts, including video. One death was reported initially.

The fire started on the middle floors of the building but soon the entire building caught on fire and the steel roof collapsed. After the incident, multiple major media in China published reports but rapidly removed them from their main Web sites and replaced them with the report from Xinhua.

Mr. Han Wen, a famous writer in China, published on his blog, "It was because they all have received orders from the top—each Web site, for reports regarding CCTV's building, please use the Xinhua version. Please do not publish photos or video clips. Do not carry in-depth reports. Place the news in the domestic news section and remove follow-up posts on Web sites."

State-controlled media Xinhua, CCTV, and China Daily offered their own version of the incident, claiming that the building on fire was the Mandarin Oriental Hotel adjacent to the main CCTV tower.

Home video captured by bystanders from numerous angles shows flames shooting up into the air 20-30 feet, even while fireworks celebrating the Lantern Festival continued to explode throughout the city and in front of the building. The building engulfed by the fire was just north of the landmark CCTV tower designed by Rem Koolhaas, a Dutch architect.

Speculation was that fireworks may have started the blaze, but no official reports gave a cause.

"The upper fifth is on fire, multiple floors. Debris is falling and flames are coming out in all directions," Edie Marshall, a Beijing resident, told Reuters. The fire began abating just before midnight (11:00 a.m. EST Monday).

According to firefighters, contact was lost with seven firefighters and one guide who entered the building. Because of strict security measures in place, the number of casualties remains unknown. From Xinhua's report, Zhang Jianyong, a political instructor with the firefighter detachment, died in the incident.

According to Reuters, there was no immediate comment from the fire department about a probable cause of the fire.