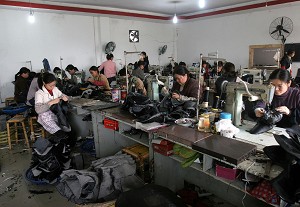 Workers making shoes in Sichuan Province. In response to criticisms from the world about the quality of products made in China, the Chinese Communist Party (CCP) has begin airing a series of special documentaries in China called "Believe in Made in China." (Getty Images)
China

CCTV Airs Special Documentary Series–'Believe in Made in China'

In response to recent criticism from the world about the quality of products made in China, the Chinese Communist Party (CCP) has begun airing a series of special documentaries in China called “Believe in Made in China.”

Recently the United States and some European countries have found recurring and serious safety problems with products made in China. Faced with criticism from the international society, the CCP claimed the criticism to be “demonizing” the products made in mainland China, and “loud demands made by politicians.” The CCP has accused American products of having similar safety problems, and its official mouthpiece, the China Central Television (CCTV), has recently broadcasted a special series “Believe in Made in China.”

According to a People's Daily Online report, starting August 19, the Economy Channel of the CCTV began airing a week-long special series of programs during primetime. The program shown at 9:35 p.m. on August 19 was titled “Believe in Made in China,” which was 90 minutes long. The episodes following it were named “Trace the Source of Made in China,” “Experience Made in China,” “China's Top 500,” and “Foreigners Buying Chinese Products.” In these programs, the director of the General Administration of Quality Supervision, Inspection and Quarantine of the People's Republic of China (AQSIQ), foreign enterprise executives, and chamber of commerce representatives “highly praised” products made in China and their quality.

A report in The Financial Times from Shanghai said that this series of documentaries was given the collective title of “Believe in Made in China.” It reflects the growing anxiety amongst China's leaders. Though within China, reports on the scandals have been restricted, a great number of overseas media have been reporting on faulty Chinese goods. The overseas reports have already begun to have a political impact inside China.

'Either to Crackdown or to Deny'

Facing pressure from the international society, China's Ministry of Commerce recently unified their account to say that “the products made in China have been slandered.” The AQSIQ director Li Changjiang claimed in the program that products exported from China are being “discriminated against” while the majority of these products actually met international standards.

On August 23, the State Council Information Office held a press conference. The Assistant Minister Wang Chao of the Ministry of Commerce said at the conference that many factors from various countries are involved in China's manufacturing. If China's production encounters any damage, it will affect countries around the world.

At the press conference, Vice Commerce Minister Gao Hucheng criticized the U.S. for violating its own court's ruling and its custom for 23 years that the U.S. would not initiate an anti-subsidizing investigation on countries with so-called “non-market economies.”

In its recently published white paper titled “China's Food Quality and Safety,” the CCP pointed out that “the overall level of food quality in China is being steadily enhanced, the situation of food safety is continuously improving,” and that “for many years, over 99 percent of China's exported foodstuffs have been up to standard.”

The Financial Times quoted Russell Leigh Moses, a Beijing-based academic as saying, “the default position of government officials is usually either to crackdown or to deny, and that is what these guys are doing.”

An example is that while the Ministry of Commerce is trying hard to deny the products allegations, the head of the Cabinet-level panel to overseas product quality and food safety, Wu Yi, is leading a four-month quality campaign across the country.

According to an August 23 Xinhua Internet news report, the Beijing authorities have decided to launch a four-month product quality and food safety campaign across the country starting immediately.

Wu Yi gave a speech by teleconference discussing the quality campaign. She called it a “special war.”

Based on the targets set out in the teleconference, key products for this quality campaign include agriculture, food processing, catering, drugs, pork, imports and exports, and other products related to public health.

Reputation of Products 'Made in China'

The recent recall of exports produced in China such as toys, tires, toothpaste and sea food during recent months has caused the international community to question China's safety protocol and government inspections.

In China, counterfeit and bootleg products are appearing continuously. Early this year an Internet survey conducted by the Xinhua News Agency showed that production safety, especially in the food industry, was becoming a critical issue. Out of 3,000 polled, ninety two percent said they were worried about food safety and seventy eight percent thought that food safety inspections were not up to standard.

The survey was conducted by a group of consultants at A.T. Kearney. It showed that Chinese consumers are paying increasing attention to food safety due to more coverage from media reports and rising standards of living. In the 2005 survey, 73 percent of the participants agreed food safety was “a critical issue,” and the percentage has now risen to 93 percent this year.

An anonymous author posted an article on various Chinese websites saying, “Without exaggeration, everything that is 'Made in China' never has a very good 'reputation' in both international as well as domestic markets. For China's state-run enterprises and middle or small non-governmental companies, it is difficult for foreigners to see clearly. However, the Chinese people are clear that not much investments have been made each year for science and technology development, quality assurance, technological maintenance, hygiene supervision, loss prevention, and the efforts to crack down on counterfeit production.”

Internet Users Criticize CCTV's 'Believe in Made in China'

In China where tainted products are everywhere, the CCTV appears to be saving face by slapping its own. Internet users in China have been responding with criticism: “Such an empty or pretentious language it is. Deceive oneself as well as others!” “I won't believe in it even if I am beaten to death!” “The slogan 'Believe in Made in China' is definitely a product made in China.”

On one Internet site, the following was posted: “That is China's biggest tragedy! It is a winner's manner to face oneself, acknowledge one's product quality and then work energetically to catch up with the level of the advanced world. But China is not doing this. Who would like to buy poor-quality products? Would you pay for low-quality goods? Would you like to buy products of inferior quality in the name of patriotism? You even utterly detest goods of inferior quality. How would you persuade foreigners to buy these goods? Don't be like a thief who covers his ears while stealing a bell. To deceive oneself and others is a sign of weakness.”

Another user pointed out, “CCTV! Don't you understand? This show is playing for the Chinese people. Do you really believe that foreigners watch CCTV? Remember, whatever position the CCTV takes, it's preparing to cheat the people. Additionally, it cannot keep the people in ignorance under a dictatorship.” “It can't fool foreigners. It is only used to fool the Chinese people, who are second-class citizens.”

Another user accused the CCTV of “its commitment to fooling the people, its mission to glorify the CCP amidst deception and confusion.” One user remarked, “Whoever the CCTV supports should die. Right now the CCTV is backing products 'Made in China.' And I assume that items 'Made in China' would be nearly gone. Some are appealing, 'Cherish life, far away from the CCTV.'”