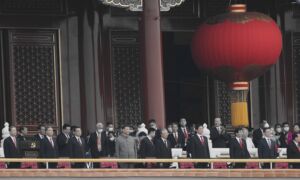 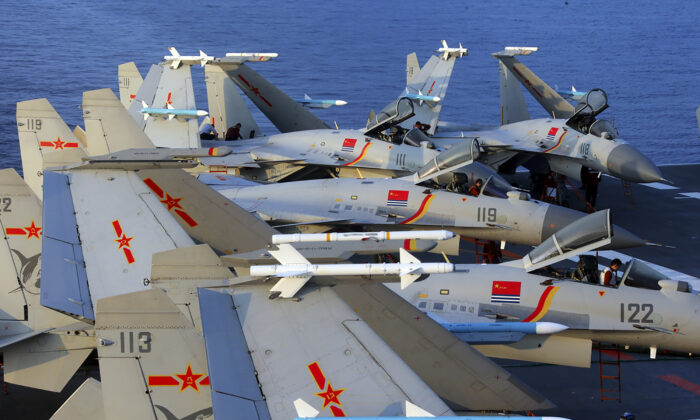 At the July 1st ceremony marking the centenary of the Chinese Communist Party’s (CCP’s) founding, leader Xi Jinping delivered a speech in which he mentioned the issue of Taiwan, again demonstrating the CCP’s intention to take over the self-ruled island by force.

Naval and Merchant Ships, a CCP military magazine, published an article on the same day disclosing three steps to attack Taiwan, attracting the attention of overseas media and military experts.

Xi claimed that “to solve the issue of Taiwan” is a “historic mission with the firm commitment of the Chinese Communist Party,” and that “no one should underestimate the resolve, the will, and the strong ability of the Chinese people to defend their national sovereignty and territorial integrity.”

Echoing Xi’s speech, Naval and Merchant Ships, a widely-circulated mainland Chinese military magazine, published an article and a video on the same day, propagating the three stages of attacking Taiwan.

In the first, ballistic missiles are used to attack Taiwan’s airports, early warning radar, anti-aircraft missile bases, and information gathering and decision-making facilities such as command centers located throughout the island.

In the third stage, surface ships and land-based rocket forces would launch artillery attacks to remove the last obstacles for the Marine Corps and amphibious landing forces to land on Taiwan.

An animated video posted by the magazine on its Weibo page demonstrated how the aircraft carrier Liaoning would prevent foreign forces from intervening.

One Taiwan military expert is of the opinion that the CCP’s official media disclosing a plan of attack on Taiwan implies there is a CCP plot to take over Taiwan, and he thinks it should not be underestimated.

Cheng-Hsiu Lee, a military expert from the Taiwan National Policy Foundation, told Chinese Epoch Times: “The CCP may model its attack on Taiwan after the Iraqi raid on Kuwait during the Gulf War. The reason is that they [the CCP] think they have to bring the Taiwanese to their knees within a very short period of time so that the U.S., Japan, and other countries won’t have a chance to intervene.”

“Judged from the military attack plan released by the CCP’s official media, the CCP is imagining conquering Taiwan in the shortest possible time with lightning-fast tactics. This is a goal that the CCP has always wanted to achieve and cannot be underestimated,” Lee added. “Taiwan has also made defensive deployments in this area for nearly two decades.”

Kris Osborn, a think tank fellow and defense editor at the Center for National Interest, wrote in September 2020: “A claim that attacking Chinese forces would quickly ‘suppress’ any U.S. intervention is, at very least, optimistic if not absurd, based upon any kind of objective analysis,” as a response to a computer simulation published by Naval and Merchant Ships last year that boasted a dual-carrier air attack on Taiwan, followed by a successful amphibious landing, would result in the island being taken over by the CCP’s military within 24 hours.

“U.S. and allied space, surface and air surveillance assets would see attacking Chinese forces well before any attack,” wrote Osborn. “Not only does America sustain a consistent naval presence in the Pacific, and the area near Taiwan in particular, but the U.S. military has many attack platforms based nearby in places such as Guam.”

“Also, it goes without saying that the United States keeps a close eye on the area with regular bomber patrols and surveillance missions,” he added.

The CCP’s magazine published its simulation video on May 20, 2020, the day of the presidential inauguration of Taiwanese President Tsai Ing-Wen.

Tzu-Yun Su, director of Division of Defense Strategy and Resources of Taiwan’s think tank Institute for National Defense and Security Research told the Chinese Epoch Times: “Naval and Merchant Ships magazine has an official background. It publishes a special theme in July every year, which is part of the CCP’s propaganda attack [on Taiwan]. Previously, it used computer software to simulate Taiwan strikes, and this year, it turned the simulation into a plan.”

“It is not surprising to see in the plan the so-called three firepower strikes, from the missile forces to the naval fleet to the long-range rockets, but from a professional point of view, the combat capability is hollow, and the precision combat capability of the air force is missing from the simulation. It is clear that professionally speaking, this is just an armchair strategy coined by a group of editors and reporters,” said Su.

In addition, Cheng-Hsiu Lee also believes that although the CCP’s official media tries to release news of military attacks, the chance of using force is low at the moment. He said that Taiwan’s defenses are not easily destroyed and that Taiwan has quite a high ability to counteract. If the CCP attacks Taiwan without any circumstances, it is tantamount to provocation and destroying the status quo in the Taiwan Strait, Lee said.

Adm. Sam Paparo, commander of U.S. Pacific Fleet, said during a webinar on June 29 that he was “concerned about People’s Republic of China as a pacing threat,” but that he was also “confidant in his forces, allies, and operational designs to thwart any attempt by China to seize Taiwan by force.”

Paparo also said that he has “a duty to be ready to respond to threats to U.S. security,” which “includes delivering a fleet ‘capable of thwarting any effort on the part of the Chinese to upend that [world] order, to include the unification by force of Taiwan to the People’s Republic of China.”

Cheng-Hsiu Lee told The Epoch Times: “The CCP knows very well that the international community will not allow it to attack Taiwan by force. It is very tough in words, but it is more restrained in action. So I don’t think the CCP leaders are so reckless and impetuous.”

“In recent years, Taiwan has strengthened many defensive measures. I think Taiwan will be cautious, but will not panic,” Tzu-Yun Su said.

Sophia Lam and Mary Hong contributed to this report.