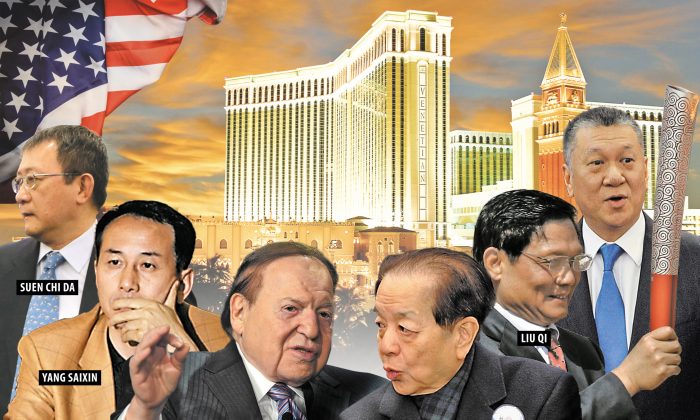 The key players in the Macau story. (Photos by Getty)
China

Macau Special Administrative Region of China, a small city that relies on the gambling industry, has been constantly involved in international affairs recently.

First, Ng Lap Seng, a Macau property tycoon, was indicted in the United States for bribing the former chairman of the U.N. General Assembly.

Second, the property management company Las Vegas Sands, owned by U.S. casino mogul Sheldon Adelson, has been fined $9 million by the U.S. Securities and Exchange Commission (SEC). It was convicted of breaching the “Foreign Corruption Practices Act” as a large amount of money it invested in China was not clearly accounted for.

Interestingly, both parties in the two cases had close ties with Chinese Communist Party (CCP) leaders. At the same time, both of them are major financiers of the U.S. presidential election.

Ng donated to former Democratic President Bill Clinton, while Adelson supported the Republican Party, also known as the GOP. Ng has also been subpoenaed for being involved in Adelson’s overseas bribery case.

Since the inside stories were extremely dramatic, the TV series “House of Cards” and the documentary “Black Money” were each based on one of these stories, respectively. The real stories are believed to be more complicated than the drama.

Since the U.S. presidential election is just around the corner, some serial cases traced overseas by U.S. authorities have directly reached Macau.

It has been revealed that CCP leaders have bribed politicians and business tycoons abroad with great commercial and diplomatic interests through intermediaries. The shocking inside stories of these under-board political deals may detonate a series of political shocks.

Adelson, now 83, was the first U.S. casino tycoon to expand the gambling kingdom overseas. He was thought to be accumulating wealth faster than anyone else in history.

“Investment in Macau is the most successful and the best bet in my life” he said.

Since he first entered Macau in 2004, he has founded the Sands China, the Venetian Macau, and two other casinos. The Sands China earned its investment back in just one year, causing his wealth to soar.

During 2005 and 2006, Adelson’s wealth increased at a speed of $1 million per hour. He declared that he would surpass Bill Gates in 2012, becoming number one on the world’s rich list.

In 2007, however bad luck began to follow him. Macau’s gambling industry plunged, which made Adelson wealth shrink. He was forced to sell his assets in Macau.

In 2011, Adelson also got into trouble with the SEC. He was accused of paying an intermediary $62 million to facilitate business activities in mainland China and Macau.

After a 5-year seesawing political battle, the case finally closed on April 7. Although Sands issued a statement without recognizing or denying the SEC accusation, claiming that the authorities had not found that he had any intention of corruption or bribery, he agreed to pay a fine of $9 million and to strengthen internal controls and accounting.

Although the SEC did not disclose the intermediary’s name, several reports claimed that Sands had tried to open up a network of contacts in China through a Chinese businessman, Yang Saixin. Yang introduced Wan Jifei, the son of former CCP deputy premier Wan Li, to Adelson.

This facilitated Sand’s partnership with the “Adelson Centre for US-China Enterprise,” the largest investment project in China.

In addition, Sands got three projects in China through Yang’s channel, including investment of $70 million in a Chinese basketball team. However, several million dollars could not be traced.

The SEC’s investigations were initiated when Zhai Guocheng (Steven Jacobs), former CEO of the Sands China, sued the Corporation over his firing in 2010. Zhai claimed that Adelson asked him to investigate government officials, in addition to conniving organized criminals in their casinos.

Zhai said the conflict between them resulted in his being fired in 2010.Their court case has been going on in Las Vegas since then.

Another person with ties to Adelson is Suen Chi-da (Richard Suen), a mysterious Hong Kong businessman.

Suen sued Adelson in the United States in 2004 and won the case in 2008. However, Sands appealed for the second time last month and succeeded, so the case will be re-tried later.

The court case revealed that in 2000, Suen told Adelson about Macau’s openness on gambling licences. Suen arranged Adelson’s meetings with Qian Qichen, then-director of the Hong Kong and Macau Affairs Office, and Liu Qi, president of the Beijing Olympic Committee and Secretary of the CCP Beijing Municipal Committee.

In return, Adelson lobbied bigwigs in the GOP using his relationship with the Party, which resulted in the abortion of the resolution on resisting Beijing’s Olympic bid.

Adelson is an important donor of the GOP. According to a 2012 report, Adelson contributed at least $35 million to the Republican Party, including about $10 million to Republican presidential candidate Newt Gingrich’s campaign.

However, Adelson didn’t keep his promise to Suen to pay the intermediary fee and 2 percent profit of Sands in Macau. Suen thus took Adelson to court, which directly triggered the US authorities’ investigation of Sands and its political deal with CCP leaders.

The British newspaper The Guardian cited an internal document on Sands in its July 22, 2015 issue. It said that Sands submitted a billion-dollar development plan of Hengqin to Chinese authorities in 2005, which was opposed by Stanley Ho, the king of Macau’s gambling industry.

The file also said that in 2005, the followers of former CCP leader Jiang Zemin were still influential. They appreciated Sand’s help with Beijing’s successful bid on the 2008 Olympics, so they thought it would be appropriate to show Sands their gratitude by supporting Sands’ Hengqin investment plan.

Former CCP officials Qian and Liu, who had made political deals with Adelson, also lost their power.

Qian, a former CCP Vice Premier and Minister of Foreign Affairs, was in charge of Hong Kong and Macau Affairs and was the main figure imposing the controversial anti-subversion law Article 23 on Hong Kong.

In 2002, Qian claimed that Article 23 would be launched in Hong Kong as soon as possible. Qian also made it clear that the legislation would be used to persecute the spiritual practice Falun Gong and other groups.

Qian was considered to be Jiang’s confidant and the top minion in the CCP’s diplomatic system. Qian and his wife Zhou Hanqiong accompanied Jiang several times on his overseas visits.

According to the media, the military had publicly criticized Qian’s diplomatic scandals, including betraying land to Russia along with Jiang. Qian was also involved in France’s sale of new Mirage 2000 fighters to Taiwan. He also shielded his son’s billion-dollar commission overseas.

Qian has been gone from the political arena for many years. There was no official report on his whereabouts. It has been said that Qian and his son were tried secretly and have been imprisoned until now.

Another honorable guest of Adelson, Liu Qi, is also a confidant of Jiang and was hand-picked by Jiang for the position of Beijing’s mayor. In addition to the collection of billions of dollars through the Beijing Olympic Games, Liu insisted on an external blockade against the epidemic of SARS in 2003.

Liu closely followed Jiang’s policy of persecuting Falun Gong, making Beijing one of the most severe places in the persecution. Therefore, Liu was prosecuted in many overseas countries.

Liu retired in 2002. Last year his crony and Beijing’s first “tiger,” or corrupt high-ranking official, Lv Xiwen, was sacked, which analysts believe may have extended to Liu.

Adelson was tied up with several court cases in recent years. Along with Jiang’s faction being purged in the recent anti-corruption campaign, Adelson’s relationship with CCP officials has deteriorated.

The British newspaper The Independent reported that Beijing authorities were very angry after the private meeting between Adelson and Qian was exposed in court.

The Guardian also reported last year that the Chinese authorities believed that Adelson was exploited by the CIA, plotting to threaten Chinese officials who went to Sands Macau and Venetian Macau to gamble.

The report also estimates that CCP officials lost about $2 billion per year in Macau’s casinos. Several CCP departments claimed that evidence showed that U.S. spies worked in Sands Macau, luring Chinese officials to bet and then forcing them to cooperate with the U.S. government.

Although Las Vegas Sands said the contents of the report are “meaningless speculation,” Adelson, a former honorable guest of the CCP, has now been tagged as a double agent in America who is not favored by either the United States or China. This is considered quite ironic.

In addition, the affairs of Macau businessman Ng Lap Seng bribing U.N. officials also pulled out the bribery scandals to former U.S. President Bill Clinton and his wife Hillary Clinton when Jiang was in power during the 1990s.

At present, Hillary Clinton, who is actively seeking nomination for the presidential election, is also rushing to cut ties.

Some commentators believe that major court cases relating to Macau have indicated the Jiang faction’s siege abroad, which reflects not only their patron’s awkward situation, but also a small step towards the West cleansing the Jiang faction’s output corruption.