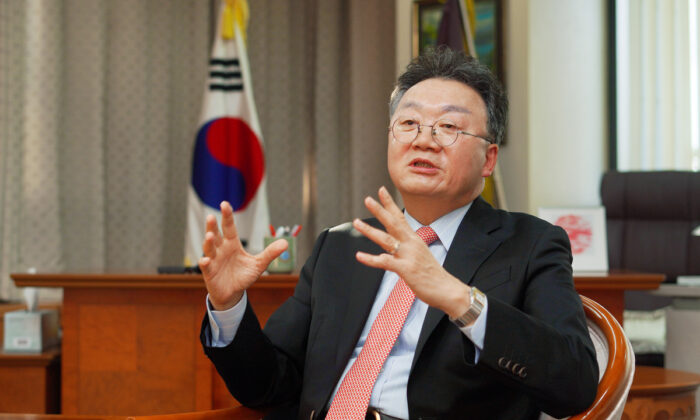 ‘CCP Would Not Dare Look Down on an Aboveboard and Dignified South Korea’: Ex-Diplomat

As the South Korean presidential election approaches, the country’s relationship with the United States, Japan, and China has become more sensitive. The foreign policy of the Moon Jae-in administration—especially its attitude towards the Chinese Communist Party (CCP)—has been the subject of serious concern.

“If South Korea adheres to its principles, and conducts diplomacy in a dignified and aboveboard manner, China [CCP] will not dare to look down on us,” Lee Joon-gyu, president of the Korean Council on Foreign Relations, told The Epoch Times.

In his nearly 40 years as a diplomat, Lee has served as Korea’s ambassador to such countries as New Zealand, India, and Japan.

“Korea is one of the top 10 economic powers in the world, and ranks 6th or 7th in terms of national defense strength, as well as being a central country with considerable political influence, which has a certain influence on China,” he said.

The senior diplomat believes that South Korea is positioned where neighboring powers are frequently engaging in various conflicts, and therefore, the country should not be even the slightest bit complacent right now.

South Korea’s Relations with China and the US

Beginning with the Trump administration, the United States has been clamping down on the CCP-ruled China on economic, trade, financial, high-tech, and military fronts, and U.S.-China relations are becoming very tense.

Some in Korea have called for a so-called balance in policy between the United States and the CCP, that is, a policy of “security for the U.S. and economic opportunities for China,” with no mention of China’s strategy of stealing intellectual property (IP) from foreign companies to “rob, replicate, and replace” successful industries in the global market.

Lee called the policy of a balanced approach to the CCP “too absurd.”

“The goal of diplomacy is to help the country gain a foothold and prosper, and security and economy are inextricably linked, and economic development could not be accomplished if security is not stable,” he said.

“The idea that China is an alternative ally for South Korea is simply invalid,” Lee said. “The country made a clear choice a long time ago: the South Korea-U.S. alliance.”

Comprehensive national power, according to Lee, reflects on economic, military, security, political, and soft power, and many other factors. “It is too early for China to become an equal power with the United States,” he said.

He added, “South Korea has been acting as if it is stepping on two boats at the same time, sending the wrong signal to the U.S. and China … this is absolutely undesirable,” he said of the Moon administration.

Lee said, when facing the CCP, “South Korea’s usual obedience and non-assertive diplomacy” is one of the missteps of its current foreign policy.

South Korean President Moon Jae-in and U.S. President Joe Biden issued a joint statement on May 21, in which they mentioned the importance of peace and stability in the Taiwan Strait, freedom of navigation in the South China Sea, and the U.S.-Japan-India-Australia “Quadrilateral Security Dialogue” (QUAD) to curb the CCP, and exceed the outside world’s expectations.

Kim Tae Woo, a professor of military science at Konyang University in South Korea told The Epoch Times that Moon’s declining domestic support rating is one of the main reasons for his pro-U.S. statements.

In January, a South Korean court ordered Japan to compensate 12 “comfort women” who were forced to work in its wartime brothels. Comfort women is a Japanese euphemism for victims of sexual abuse during Japan’s 1910-1945 colonial rule of the Korean peninsula.

The Japanese government views the two issues from World War II as being resolved in the 1965 Treaty on Basic Relations signed by both countries.

“A radical change in thinking is needed to ease the tense Korea-Japan relationship, which is currently at its worst,” Lee said.

Although Korea has grown in diplomacy in recent years, the ex-diplomat also expressed regret that “the status of the Korean Foreign Ministry [in the country] has now declined so much.”

Lee made an appeal to the current administration and the next one, “before deciding on foreign policy, please listen to the opinions of diplomatic experts.”

Lee Khasub contributed to this article