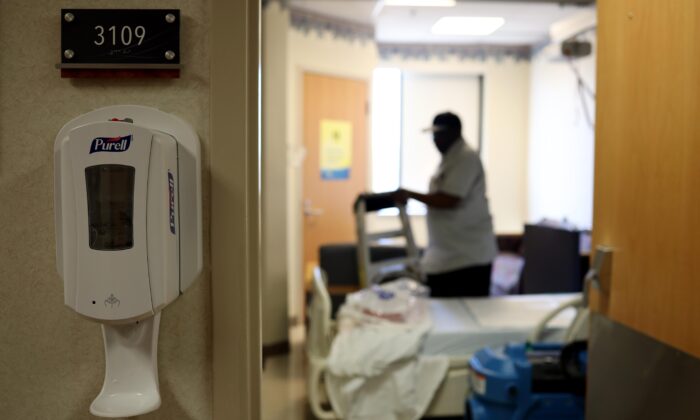 While tens of thousands are hospitalized across the United States due to COVID-19, the numbers are a fraction of what experts predicted just a few days ago.

The main reason appears to be that the projections were already off the day they were released.

The model in question was published by the University of Washington’s Institute for Health Metrics and Evaluation (IHME). It was repeatedly referenced by Dr. Deborah Birx, the response coordinator of the White House coronavirus task force, during President Donald Trump’s daily press briefings on the pandemic.

On March 30, the model’s authors released a paper that warned that the country will need about 8,000 to 250,000 extra hospital beds to cope with the pandemic (pdf).

“Even with social distancing measures enacted and sustained, the peak demand for hospital services due to the COVID-19 pandemic is likely going to exceed capacity substantially,” they said. “Alongside the implementation and enforcement of social distancing measures, there is an urgent need to develop and implement plans to reduce non-COVID-19 demand for and temporarily increase capacity of health facilities.”

The CCP virus, also known as the novel coronavirus, broke out in Wuhan, China, around November and was allowed to spread around the world due to the coverup and mismanagement by the Chinese Communist Party (CCP).

The interactive projections model on IHME’s website was last updated on April 1.

The model was supposed to be updated later on April 5, a spokesman for the institute, Dean Owen, told The Epoch Times. However, it was not updated by press time. He didn’t explain why the predictions were off. “Sorry, wish I had more to offer you right now,” he said via email.

The lead author of the model, health metrics sciences professor Christopher Murray, didn’t respond to a request for comment.

The model on IHME’s website wasn’t updated by press deadline.

How Many Are Currently Hospitalized?

The model also was off about states other than New York, but exactly how far off is often hard to determine because many states don’t make their daily CCP virus hospitalization data easily available.

Only 13 states list the day-by-day hospitalization count in a readily accessible form, such as on the virus information web page of their health department.

For the nine remaining states and the District of Columbia, no hospitalization numbers were available by the time of publication.

Given that states with available data had a current hospitalization rate around 6 to 20 percent, if each of the no-data states had a rate of 20 percent, the hospitalizations for the whole country would add up to some 47,000 as of April 3 to 4.

Among states with available data, the model was only accurate for one—Missouri. It predicted the need for 282 to 431 hospital beds on April 4. Missouri had 413 hospitalized that day.

For the other 11 states, the data breaks down as follows:

At least in some other regards, the IHME model appears accurate. For instance, it predicted 1,133 to 1,555 COVID-19 deaths for April 4. There were around 1,350 deaths reported that day.

Update: The article has been updated with the name of the IHME spokesman.