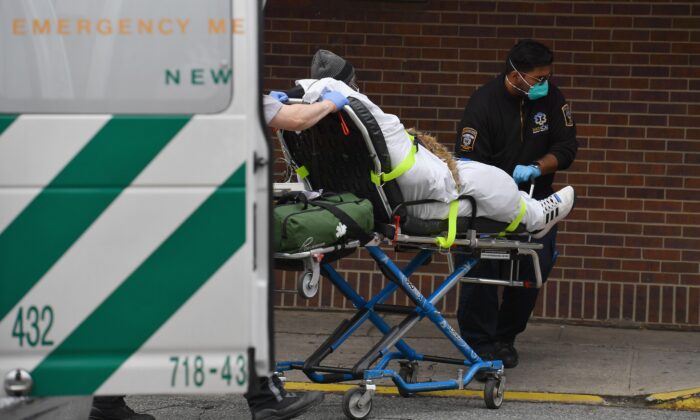 Paramedics push a gurney with a patient to the Brooklyn Hospital Center Emergency Room in New York City on March 31, 2020. (Angela Weiss/AFP via Getty Images)
AMERICA

An updated model projects that far fewer hospital beds will be needed to cope with the CCP virus epidemic in the United States. But the model still doesn’t match reality, as there were overall fewer CCP virus hospitalizations than the model assumed already on the day the updated version was released.

The model was developed by the University of Washington’s Institute for Health Metrics and Evaluation (IHME). Its previous update from April 1 predicted the country would need 120,000 to 430,000 hospital beds for virus patients on April 16, when it indicated the epidemic would peak.

Some online commentators and media, including The Epoch Times, pointed out that the projections didn’t measure up to reality, massively overstating the hospital capacity needed in most states.

The projections are important because the main point of current stringent government interventions is to “flatten the curve” of new infections, so the health care system isn’t overwhelmed with a sudden influx of patients. If the government expects an unrealistic number of patients, the mitigation measures may be off, too. Indeed, the model was repeatedly referenced by Dr. Deborah Birx, the response coordinator of the White House coronavirus task force, during President Donald Trump’s daily press briefings on the pandemic.

On the evening of April 5, IHME updated its model, slashing the peak expected hospital capacity needs to about 73,000 to 285,000 beds, while moving the peak to April 15.

The updated model still expected the country would need roughly between 8,000 and 96,000 extra hospital beds at the peak of the epidemic.

But the model again failed to match reality.

Already on April 5, of the 18 states with available daily hospitalization data, the model’s mean estimates overshot for 15 of them. Even the low end of the model’s estimates was too high for 10 of the states.

The model missed the mark most egregiously in North Dakota, where it forecast the need for 126 to 2,076 beds on April 5. In fact, the state only reported 19 currently hospitalized with the virus.

On the other hand, for Louisiana, even the model’s upper limit underestimated hospital capacity needs. The state was supposed to need between 834 and 1,714 hospital beds on April 5. In fact, it already reported 1,803 hospitalized that day.

IHME didn’t respond to a request by The Epoch Times for comment.

The CCP virus, commonly known as the novel coronavirus, broke out in Wuhan, China, around November 2019 and was allowed to spread around the world due to the coverup and mismanagement by the Chinese Communist Party (CCP).

It’s not an easy task to find out how many people are currently hospitalized with the virus across the country. Some states publish the data on the websites of their health departments. Some, it seems, only provide it during press briefings or when prompted. Some only publish the cumulative counts of people ever hospitalized, but those also include patients already discharged or deceased.

Some states caution that the data may be incomplete or list separate numbers for confirmed and suspected CCP virus cases. Some don’t even have the data.

“This is information that we have asked hospitals to provide, but a significant number of hospitals have not provided it,” Bob Wheaton, spokesman for the Michigan Department of Health and Human Services, said in an email to The Epoch Times.

Michigan is one of the worst-hit states, with nearly 19,000 virus cases and over 800 deaths.

West Virginia also doesn’t have the data, but is working with the state’s hospital association to provide it, said Allison Adler, spokeswoman for the state’s Department of Health and Human Resources, in an email.

From the available information, The Epoch Times was able to estimate that the overall national hospitalization rate is about 20 percent of the total number of cases, although it varies significantly from state to state, from less than 10 percent to more than 30 percent.

Using this figure, The Epoch Times estimated the current hospitalization counts for states with missing or insufficient data. Based on that calculation, there were over 52,000 hospitalized with the CCP virus in the United States on April 5.