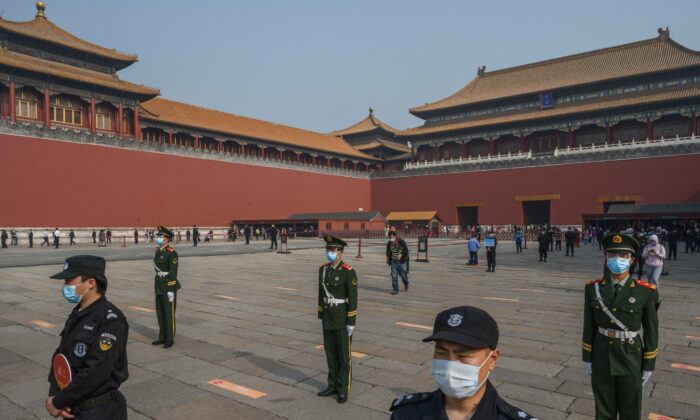 Chinese paramilitary police and guards stand in front of the entrance to the Forbidden City in Beijing on May 1, 2020. (Kevin Frayer/Getty Images)
Thinking About China

In 1992, historian Francis Fukuyama wrote that the fall of the Soviet Union signaled “the end of history.”

While there were nuances to Fukuyama’s theory, it essentially held that in the battle between Marxism and capitalism, Marxism had lost. Communist countries from Cuba to China and everywhere in between were all abject economic failures, murderous regimes, and horrendous polluters that were absolute hellholes. The top-down, anti-God, oppressive communist system had failed to deliver on its promises in every way.

Conversely, free capitalist nations of every stripe had performed relatively well in virtually every way that mattered—in living standards, in freedom for people in all of its forms, in technological innovation, in artistic and political expression, in human rights, and even in lowering pollution. All that remained, according to Fukuyama, was the technical management of absorbing the failed Marxist nations into the capitalist global economy.

But a not-so-funny thing happened on the way to the “end of history.” A decade before the fall of Soviet communism, the West—led by the United States—decided that engaging the Chinese Communist Party (CCP) wouldn’t only be a counterweight to the Soviet Union, but would also result in China becoming more like the free, capitalist West.

The thinking was that by giving money, factories, technology, and markets to the communist Chinese, we could remake the world’s most populous nation into a society that resembled our own. We thought we were succeeding, but the 1989 slaughter of 10,000 young students in Tiananmen Square ended that delusion.

After that cruel display by the CCP, the United States doubled down on China. First, the United States responded with weak sanctions. Then, in 2000, it invited the CCP into the World Trade Organization. From 1980 to 2020, China went from a backward agrarian nation unable to feed itself to rivaling the United States in technology, economic power, and global influence. Over those years, what China didn’t obtain legally in terms of intellectual property and technology, it stole from the West, one way or another. That practice continues today.

Not too long ago, the CCP gained the technological capabilities—from facial recognition to cameras, recording devices, GPS locators, and other items—to create a digital surveillance system to monitor, track, identify, arrest, detain, and dispose of those individuals who may or could possibly pose a threat to the country. China’s social credit system was born.

Then, the CCP bundled their surveillance technology, marketed it as “smart city” technology, and sold it to other authoritarian regimes around the world. The CCP certainly didn’t invent smart tech surveillance—the UK has been among the most surveilled societies on Earth for decades—but China has perfected it.

As for censorship and propaganda, U.S. media and academia fought the Trump administration and its supporters to a degree that we hadn’t seen before. Negative events were magnified and even invented out of whole cloth, while any positive ones were simply underreported, distorted, or not reported at all.

But all of those developments were only the precursor to what was to come with the debut of the CCP virus in 2019. The CCP virus is the pathogen that causes COVID-19

As it turns out, we in the United States have our own homegrown strain of totalitarians who have been ready to be triggered into action. It has become evident that for U.S. big tech moguls, great wealth isn’t enough.

They want great power, and indeed, they have it.

Sadly, the coordination between the tech moguls and the federal government to censor any ideas that contradict the official narrative regarding the CCP virus in the United States resembles the relationship between the CCP and the state media in China. Social media companies, along with the federal government, are using the CCP virus to justify infringing on our constitutional rights under the guise of “safety.”

It’s as if the Bill of Rights—which not only guarantees our civil rights and freedoms as individuals, but also restricts the authority of the federal government—has itself succumbed to the virus and has been replaced by medically induced authoritarianism.

That’s because it has.

The Power of Fear

Sadly, that bothers far too few people in the United States. Of course, who can argue that relinquishing our rights in the name of medical safety isn’t wise or legal? Very few, because if you do, you’ll be censored. Publicly excoriated. Unemployed. Canceled.

The reality is that we’ve been spoonfed fear day in and day out for 18 months now, told that we need to accept that we’re too vulnerable, too weak, and too afraid to face the world, to face a disease with a 99 percent survival rate, without living under the protection of the state.

And where is China in all of this?

In fact, over the past several years, China has been buying up much of American industry—from agricultural farmland and our largest meat processing plants to AMC movie theaters and major media outlets. The consequences of this are chilling: The CCP is gaining great influence over what we put in our bodies and in our minds. That’s just the kind of power the CCP likes to have.

What’s more, all of those tech giants have made billions of dollars in China and remain deeply connected to the communist regime. Another coincidence. But can anyone really hold that against them? After all, the same could be said of the Biden family.

But where does that leave the American people?

A Return to Empires of Old?

For decades, the oppression of the Chinese people by the CCP was regarded the world over as a dismal historical aberration—a dreary dystopian stepchild of the old Soviet dictatorship. The assumption that it would evolve into a more Western-style country has been proven foolhardy. Rather, current trends show that China is a growing empire with global capabilities and ambitions, disdaining the very Western nations that enabled its rise.

From today’s perspective, perhaps it is the United States that’s disappearing before our eyes and is the historical aberration. Is history, marked mostly by the brute force and tyranny that defined empire after empire, now returning to form?