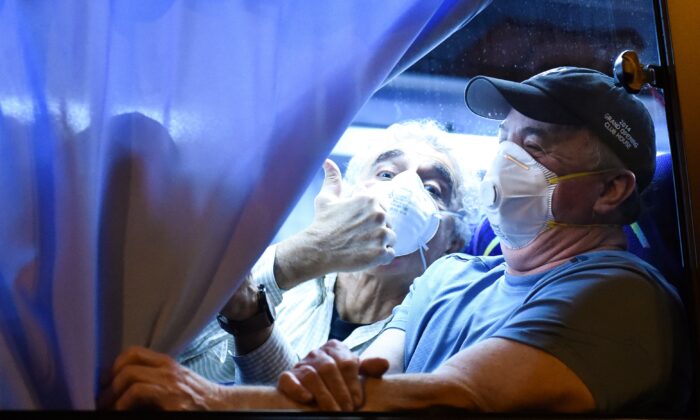 A U.S. passenger thumbs up to reporters while arriving at the Haneda Airport in Tokyo on Feb. 17, 2020, after disembarking in Yokohama from the Diamond Princess cruise ship, where people are quarantined onboard due to fears of the new COVID-19 coronavirus. (Kazuhiro Nogi/AFP via Getty Images)
Viewpoints

CCP Virus Raises the Question: What Is Life Worth?

The spread of the CCP virus has forced the world to a grinding halt.

Encouraging families to “quarantine” at home and practice “social distancing” in public is now the norm, even after just three weeks, with at least three more weeks to go.

But the CCP virus has also forced other things to stop: abortions; surgeries; jobs. Some of these make sense. Others don’t. The CCP virus and the world’s response has raised the question about the value of life and is forcing us to answer it: What is a life worth?

As soon as it became clear the CCP virus was an unprecedented enemy that was no respecter of class, race, economic status, religion, or any other metric, health-care experts, government officials—and really, everyone else with a pulse—began paying attention and devising ways to mitigate infections and loss of life.

“Shelter in place” policies are implemented nearly across the board in every state, and most states have closed all non-essential stores, organizations, businesses, conferences, and more.

While hospitals in New York City are running out of beds for people infected with the CCP virus, other reports show rural hospitals might not survive this period since they have been forced to stop all elective surgeries, which are often a major source of revenue for hospitals.

While this might seem small when compared to overflowing New York City hospitals or the rising death toll there, for rural communities, their own hospitals are their own lifesavers—and they still need medical care now and in the future, too.

An Atlantic article on the topic reports that the University of Washington has decided some surgeries, such as brain-cancer surgeries, will continue without delay, but others, such as a patient who has epilepsy and who has a petit-mal seizure daily, will have to wait to receive the brain surgery that would resolve that issue, despite having planned her entire life around that surgery, down to re-arranging work, school, and child care to make time for the long recovery.

Her doctor told The Atlantic the hospital is “prioritizing surgeries in which ‘the length of your life is affected.’ The ‘quality of life’ surgeries are the ones now getting postponed.”

While I can understand the necessity to slow the spread of the CCP virus, if a hospital delays life-changing (not necessarily life-saving) procedures to the point where their own revenue stops and they are forced to close, that could also cost lives in the long run, or at the very least, impede quality of life.

Then there’s an issue on the other side of the medical spectrum: abortion. Several state officials shut down non-essential medical activities, especially ones that would utilize coveted personal protection equipment (PPE) that medical personnel need to combat the CCP virus. This included abortion clinics, temporarily, of course. Multiple states have tried to halt abortions temporarily, including Texas, Alabama, Oklahoma, Iowa, Indiana, Ohio, and Louisiana.

Whereas the public has taken social distancing measures, quarantine, and even stopping non-life saving surgeries in its stride, this was not the case with abortion. Critics immediately rallied and abortion organizations such as Planned Parenthood filed lawsuits right away completely ignoring the imminent threat of the CCP virus and instead complaining that closing abortion clinics was a violation of a woman’s constitutional right.

Judges in four states have banned the attempt to shutter abortion clinics temporarily, although a three-judge panel for the U.S. Court of Appeals for the Fifth Circuit said Texas’s ban on abortions could stay while the lawsuit proceeds.

All three of these issues, the CCP virus, halting surgeries effecting a hospital’s bottom line, and shuttering abortion clinics temporarily, are in many ways diametrically opposed, yet they raise the question: What is a life worth?

Right now the Jewish community is celebrating Passover. “Choose life” is a foundational, if not the foundational, ethos in Judaism, and in many ways that ethos appears to have taken over the world when it comes to handling the CCP virus—in many ways, just not all ways.

If we’re going to stop the world so the CCP virus spreads slowly and thereby more lives are saved, why wouldn’t we also halt abortions so that more unborn lives and medical personnel are saved? It’s not only an unnecessary dichotomy but an unethical one.

At the same time, if we’re halting surgeries and a hospital loses so much revenue it must close and leave its residents without an ER, is that not a contradiction to the highest good as well?

The CCP virus has raised medical, logistical, financial, and political questions. It’s no surprise it has raised philosophical questions, too. I hope that we as a society can continue to wrangle with these so that we know better how to handle these pressing life issues, should something like this strike us again, in the future.

Special Coverage:
For our latest coverage of the CCP Virus Outbreak, visit our new section and sign up for our CCP Virus Newsletter.