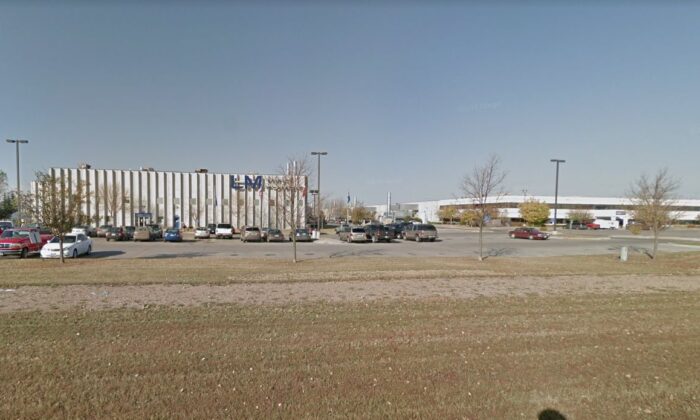 An outbreak of the CCP virus at a wind power plant in North Dakota shut down production on April 20, 2020. (Google Maps)
AMERICA

An outbreak of the CCP virus at a wind power plant in North Dakota shut down production.

In a statement to news outlets, a spokesperson for GE, which owns LM Wind Power, said its facility in Grand Forks will be temporarily closed for a minimum of two weeks so the firm can carry out “an extensive disinfection process,” while employees will be paid “as usual” during the closure.

“We will continue to support our employees and monitor their condition as we determine when and how we can restart the plant safely,” the spokesperson said in the statement.

It came after the North Dakota National Guard tested hundreds of people on April 16 at the LM Wind Power facility. North Dakota’s health department later confirmed more than 110 confirmed cases of the virus connected to the plant, and at least eight workers have tested positive, CNBC reported.

The company opened its fourth Chinese factory in 2017. According to a press release, the company employed 2,300 people in China at the time.

The company is one of the few foreign firms operating in the Chinese offshore wind market, reported Chinessima. “LM Wind Power is gaining ground in China’s competitive domestic landscape thanks to leading technology and highly-reliable manufacturing. Our company works with four out of the top five offshore wind turbine manufacturers in China,” said Alexis Crama, offshore VP at LM Wind Power.

On Saturday, the state’s health officer, Mylynn Tufte, issued a quarantine order for LM Wind Power workers. They now have to be in medical isolation at their homes “unless otherwise authorized,” she said in a statement.

“As COVID-19 continues to spread across North Dakota, staying home as much as possible continues to be one of the best ways to reduce your exposure to the coronavirus,” she said.

“While this is still under investigation and we don’t have the final results, we know that this is a very serious event,” Steven Weiser, the president of Altru Health System, said in a press conference, reported the Grand Forks Herald.

He added: “The potential impact we now face has the ability to overwhelm our health care workers and our health system. … This is a big deal. We need you to take this seriously and respond appropriately.”

Sparsely populated North Dakota remains among the U.S. states least impacted by COVID-19, the disease caused by the highly contagious virus. Only Montana, Alaska, and Wyoming have fewer cases, according to a Reuters tally.

While some hot spots like hardest-hit New York have seen their rates of hospitalizations and other numbers start to level off, North Dakota was moving in the opposite direction, Burgum said.