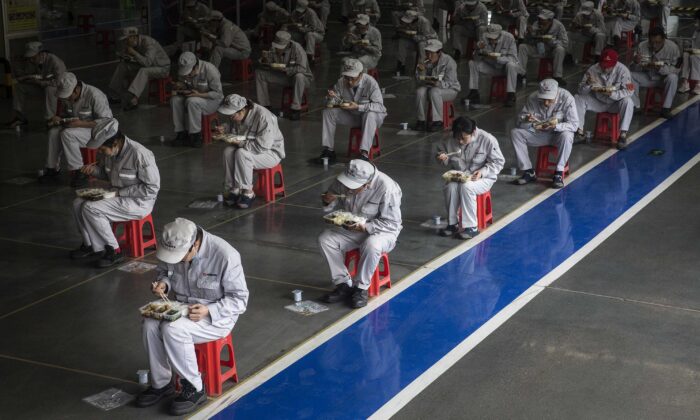 Employees eat their lunch while staying 2 meters away from each other at the Dongfeng Fengshen plant in Wuhan, Hubei Province, China, on March 24, 2020. (Getty Images)

The CCP (Chinese Communist Party) virus pandemic is imposing an enormous cost across the world. This must already amount to many trillions of dollars.

While writing this, the London-based Henry Jackson Society released a report on this very subject. It contains valuable information on the damage sustained and the complicity of Beijing in failing in its duty to inform the world about the virus.

I have, however, somewhat different views on the best method to obtain just reparations.

According to this and numerous reports, the Beijing communist regime behaved irresponsibly when the virus emerged, suppressing information, harassing those medical practitioners who tried to warn about what was happening and, in particular, that the virus was being transmitted between humans.

The World Health Organization (WHO) supported Beijing in the suppression of information concerning the virus. Clearly, the WHO leadership is captured.

The irresponsibility of the authorities is graphically illustrated by the arrest of the principal whistleblower, Dr. Li Wenliang, who was required to sign a confession that he had made “false comments” and had disturbed “the social order.” This was consistent with the state position that there was “no clear evidence of human-to-human transmission.”

Tragically, Li died in February, reportedly from the virus.

There’s a widespread view that Beijing’s attempts to suppress the facts and failure to warn the world led directly to the spread of the virus without the authorities in other countries being aware of the danger. Had Beijing warned the world, the virus could have been contained much earlier than it has been.

It’s widely believed that the virus escaped from a bat in a “wet market” where, in particularly unhygienic conditions, bats, rats, dogs, cats, scorpions, and other “exotic” animals are stored in cages stacked on top of one another, sharing fluids, discharge, and excrement with the carcasses of pythons and other animals on slabs.

According to the Daily Mail on March 28, those markets are operating again.

Further, Communist Party officials subsequently promoted the myth that the U.S. Army had introduced the virus into Wuhan. Given that the communist system strongly discourages autonomous and independent activity in government, it’s highly unlikely that this was done without high-level approval.

According to other reports, the virus escaped from a laboratory in the Wuhan area, one possibly involved in weaponizing viruses. A variation of this is that the remains of bats used in experiments were sold at a wet market.

Proponents of these alternative origins of the virus point to the rejection by the leader of the People’s Republic of China (PRC) of President Donald Trump’s offer to send U.S. scientists to Wuhan to help. They say this indicates a wish to keep its laboratory activities confidential. In addition, it’s been reported that Beijing required the destruction of samples that Li and others had taken of the virus.

Accordingly, there are widespread demands, indeed, an expectation, that the Chinese regime will have to pay reparations to those countries that have suffered, with people dying or seriously ill, and economies significantly damaged.

The question is, how could this be done if, as can be expected, Beijing refuses to take responsibility?

Unfortunately, without Beijing’s cooperation, most of the methods suggested for legal action may fail.

However, I believe that one course of action would bring Beijing to heel and settle the claims. I believe that in the event that Beijing refused to settle, this method would enable countries to sequester assets in recompense. This isn’t to deny the ability of and indeed the likelihood that Beijing might retaliate in ways known and as yet unknown.

Legal proceedings have, in fact, already begun against Beijing with a class action in the U.S. federal court system. However justified this class action is, it has no chance of success.

That’s because of the doctrine of sovereign immunity in public international law that is incorporated into most legal systems. It was consolidated in the United States in 1976 in the Foreign Sovereign Immunities Act, with the Supreme Court confirming that a foreign government in cases such as the one brought against Beijing is immune from the jurisdiction of U.S. courts.

An amendment, the Justice Against Sponsors of Terrorism Act, 2016, does not offer a wide enough window to encompass a claim for damages over the CCP virus. Nor would a similar chipping away of sovereign immunity in the UK in House of Lords cases involving a former head of state, the late Augusto Pinochet.

An action brought in other domestic courts, including Hong Kong’s, would probably meet the same hurdle.

The second suggestion is for a government to bring an action against Beijing in the World Court—the International Court of Justice—and obtain a judgment, which normally takes years, and then, seek an order for reparations.

Although a judge nominated by Beijing sits on the court and is its vice president, China has refrained from lodging a declaration accepting the court’s jurisdiction and would be most unlikely to accept it in such a case. Similar difficulties would apply to the International Court of Arbitration.

The WHO could also seek an opinion in the unlikely event that a majority of its 194-member assembly or of its 34-member board agreed. But then the court could be persuaded to find that an opinion about the economic consequences of a health issue were beyond the powers of the WHO. In fact, in 1993 the court actually rejected, for a similar reason, a request from the WHO for an opinion on the use of nuclear weapons.

A fourth avenue would be for activists to establish an informal people’s tribunal. These have been used to investigate mass human rights abuses in Iran, Vietnam, Indonesia and, more recently, the China Tribunal in relation to forced organ harvesting in the PRC.

Decisions of such informal tribunals can provide some resolution for survivors and those close to victims. Moreover, what they discover and what they establish inform the public and the media and can encourage subsequent official action.

The London-based China Tribunal’s judgment was handed down in 2019. It found, on the basis of strong evidence, that the Chinese state was engaging in the forced harvesting of organs for sale on demand.

This trade was found to involve the killing of political dissidents, those who belong to religions or sections of religions outside of party control—Muslim, Protestant, and Catholic―and above all, Falun Gong practitioners.

Chaired by a respected international lawyer, Sir Geoffrey Nice QC, who had led the prosecution of former Serbian President Slobodan Milosevic at the U.N.’s International Criminal Tribunal for the Former Yugoslavia, the Tribunal consisted of several outstanding members.

These included a prominent thoracic transplant specialist and professor of cardiothoracic surgery at University College London, prominent Malaysian, Iranian, and U.S. human rights lawyers, a businessman engaged in a range of NGOs in the fields of human rights, and a respected academic on Chinese history.

Obviously, Beijing would neither take part in a private tribunal over the CCP virus nor observe any ruling. As with the China Tribunal on organ harvesting, Beijing would be likely to use its influence to try to ensure that governments and the mainstream media would pay only nominal attention to it. This was surprisingly successful in relation to organ harvesting, but would probably be less successful in relation to the CCP virus.

I believe that there’s a solution in a fifth process, one that would allow the recovery of substantial damages. It would require courage on the part of the governments taking this action.

This is what I would call the Nuremberg solution, based as it is on the tribunal of that name. This was established in response to the Moscow Declaration by Churchill, Roosevelt, and Stalin to pursue World War II Nazi criminals “to the utmost ends of the earth and will deliver them to their accusers in order that justice may be done.”

It would be open to selected powers, for example, the United States and similar countries, to enter into a treaty to establish a similar tribunal to hear the claim.

Now in both U.S. law and that of the UK and Commonwealth realms such as Canada, Australia, and New Zealand, where the Crown enters into and ratifies treaties, legislation would be necessary to give effect to decisions taken by the tribunal.

The initial number of countries wouldn’t affect the enforceability of the tribunal decisions, which could be affected in each country against assets available.

It would be important to provide for other countries to accede subsequently to the treaty but out of caution, only with the unanimous approval of the original signatories.

Beijing has a poor record in respecting international tribunals, even those rare ones to which it is legally subject, such as one that heard a case brought by the Philippines concerning the South China Sea and was handed down in 2016.

While Beijing would be under no obligation to appear before this tribunal and can be expected to refuse to take part, every opportunity for Beijing to appear and to give evidence at every stage should always be given.

Provision should be made in the treaty that where a government refuses to appear, one of the parties may apply for the tribunal to appoint an amicus curiae, a friend of the court, to appear and to present a case for Beijing.

An invitation could go, for example, to the Chinese Society of International Law to fill that role.

The treaty should clearly state the questions, which should be determined by the tribunal and would include such questions as how the virus started, the obligation of Beijing to warn, whether that obligation was fulfilled, how the virus spread to the parties and other countries, and the amount of both interim and final damages.

The treaty should rule on evidentiary questions and make broad provisions for the hearing of evidence, including hearsay and in any form.

The tribunal should have power to declare that the property of the Chinese state will be available to satisfy any award, a power to freeze that at any time and that such property extend to that of high-level functionaries within the Politburo, the CCP, its associates and partners, as well as all corporations and other entities formed in, domiciled in, or under the control of Beijing, the CCP, its associates and partners, wherever located and whether or not vested in nominees, trustees, or similar cover.

The process would be that once interim orders are handed down, these could be given legislative effect by the parties, for example by the U.S. Congress and say, the Australian Parliament.

In the Australian case, Beijing-owned and -controlled property could then be taken to satisfy the outstanding interim and final judgments.

The tribunal should stay in place for five years in the event of further possible accessions or the need, for any reason, to hear requests from any party or the amicus (appointed to represent the interests of Beijing). There should be a power to make further orders with a continuing power in the court to make or refuse those orders or to take such decisions as it deems necessary or expedient.

Such a tribunal will allow the recovery of full and fair compensation for damages incurred by Beijing’s role in the crisis relating to the CCP virus.