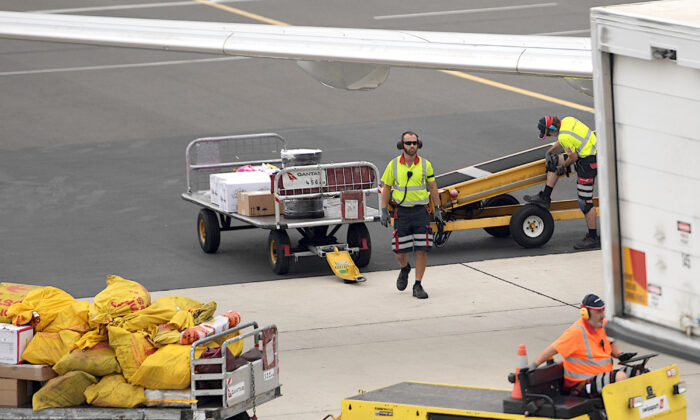 The South Australian government has advised of an outbreak of a CCP virus cluster at Adelaide Airport. It is asking all those who have been to certain staff-only areas since March 18 to self-isolate.

Some of the places thought to have been exposed to the CCP (Chinese Communist Party) virus, commonly known as the novel coronavirus, include the kitchen, dining areas, bathrooms, staff elevators, and smoking rooms.

In a statement, Qantas Group said the cluster at Adelaide Airport is thought to have been spread by a Qantas employee who had been on holiday overseas, then went to work with symptoms, which exposed co-workers to the virus.

On April 8, the Qantas Group said almost all cases of employee infections were the result of community transmissions, and not from working on aircraft.

“There’s been no confirmed cases of transmission of the coronavirus to employees or customers on board our aircraft, or any aircraft globally for that matter,” Qantas’s medical director Dr. Ian Hosegood told The Epoch Times in an email sent via a spokesperson.

Members of a Qantas flight crew recently contracted the CCP virus while on the ground in Santiago, Chile.

A week later, the Australian government implemented new rules for flight crews in an effort to prevent the spread of the virus, requiring crews to remain in their hotel rooms between flights.

That said, a union leader commented that he remains concerned for the health and safety of Qantas staff who are being asked to volunteer for rescue flights that Qantas is operating on behalf of the government.

On April 9, Steve Purvinas, a union leader representing aircraft engineers, posted a letter on Twitter in which he expressed concern about the CCP virus being spread among Qantas staff.

I am sick to death of #Qantas downplaying the dangers of this virus. They are risking their employees lives in the pursuit of profit. We won’t let that happen to our members. #smh #skynews pic.twitter.com/HwmrJOaHoz

Adelaide Airport and Qantas Group have implemented advanced cleaning measures for high touch areas, such as inflight entertainment screens and tray tables. Adelaide Airport said that at this stage, no public areas are thought to be affected by the virus.