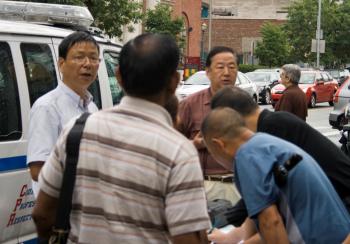 HATE TABLE: A table to distribute hate materials and gather signatures against Falun Gong was set up on the corner of Main Street and Sanford Avenue on Aug. 2. (Genevieve Long/The Epoch Times)
US

A video recording by Mr. Hu, a reporter from New Tang Dynasty Television (NTDTV) shows Rong Shen grabbing Zheng, pulling and pushing him by his shirt. Zheng’s shirt was ripped in two places during the alleged attack. Before police arrived, witnesses claimed that Shen had allegedly scratched his own chest, causing injury.

When police arrived on the scene, Shen told the police that Zheng had attacked him, showing them the alleged self-inflicted injuries. The police arrested both of them, but Zheng was released after police declared that he was innocent.

On Sept. 7, Zheng, (who asked for his first name to not be released for safety reasons) was walking by a table near Kissena Blvd. and Barclay Ave. in Flushing, where workers distribute hate propaganda against Falun Gong. Zhen recalled, “When I was passing by the table, I saw a Chinese man shouting at a Falun Gong practitioner. I commented, ‘Heaven will destroy the Chinese Communist Party.’”

After hearing this, Shen, who was working at the table, allegedly attacked Zheng. “Suddenly the man went berserk. He ran at me, grabbed my shirt and pulled me around. I tried my best to get free,” said Zheng.

“During the entire ordeal, I didn’t fight back,” said Zheng. “Even when facing cruel tortures, Falun Gong practitioners will never retaliate.”

Once the police arrived, Zheng stood, shirt torn, while Shen pulled up his shirt to show the police his alleged, self-inflicted injuries. The police then arrested both of them.

While the two were at the police station, the police were shown the video of the attack. The police then released Mr. Zheng at approximately 12:10 a.m. According to the Queens District Attorney’s Office, Rong Shen is currently being charged with attempted assault in the third degree and harassment in the second degree.

Hu, the NTDTV reporter who filmed the attack was also a victim of false accusations. “At about 3 p.m. there was a crowd near Cathay Bank on Main Street of Flushing,” said Hu. “I was video recording the assembly when a woman, Li Huahong, who I know is facing a lawsuit, broke the monitor of my TV camera.”

When police arrived on the scene, an older man told the police that he had seen Hu hit Rong Shen. “I was shocked,” said Hu.

“The police took my reporter identification to check on me and told me to wait,” said Hu. “Meanwhile, I saw the older man discussing with several pro-communist men. It wasn’t until then that I realized the older man was one of them. It was all a staged act.”