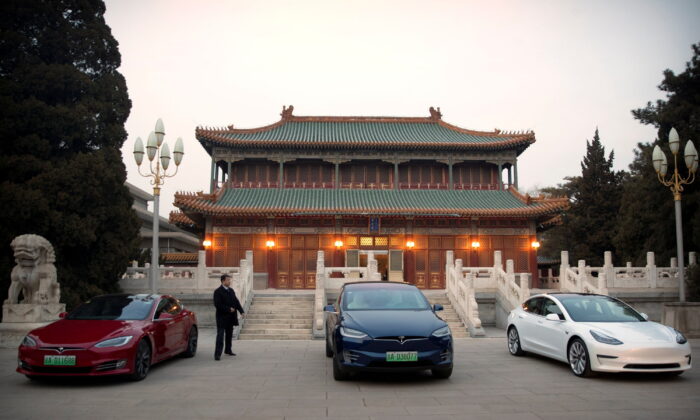 Tesla vehicles are parked outside a building at the Zhongnanhai leadership compound in Beijing on January 9, 2019. (Mark Schiefelbein/Pool via Reuters)
Chinese Regime

According to local media Qinhuangdao Evening News, on June 18, Qinhuangdao launched a campaign to control knives in the city. Law enforcement officers tethered all kitchen knives and scissors in food stalls with strong metal cords.

A viral video shows a local Urban Management staff tying kitchen cleavers and scissors used by street food vendors to the counters with metal wire to make sure they cannot be carried out of the stalls.

In the video, one can hear a man say to himself: “I would never have imagined that a kitchen knife would need to be tied with iron wire.”

The new control measure drew wide attention on social media. One netizen said in a post, “I remember that in the history books there was such a policy in the last years of the Qin Dynasty (221 to 206 BC), whereby 10 households were only allowed one kitchen knife, and soldiers were sent to the communities to prevent the people from rising up.”

Dong Guangping, a current affairs commentator, told The Epoch Times on June 27, “The control of knives to this extent in mainland China has never happened before. This is the first time. It is actually related to the [upcoming CCP] Beidaihe meeting. I think it’s a temporary measure just for the meeting.”

Current and former CCP leaders usually hold an internal meeting in Beidaihe every summer to discuss Party politics and policies.

Earlier this month, Tesla vehicles were banned from the streets of Beidaihe, a move believed to be part of CCP’s preparation for its top meeting.

A picture of a notice received by a Tesla owner has been circulating on Chinese social media. The owner was required to sign a letter of commitment, promising not to drive into the Beidaihe District of Qinhuangdao from July 1 to August 31.

Tesla electronic vehicles use cameras for the autopilot function. The cars are connected to Elon Musk’s Starlink internet satellite system, which is not controlled by the Chinese regime. International media and experts believe that the CCP is concerned that the Tesla will be used to spy on its top meeting.

Victor Shih, an associate professor at the UC San Diego Institute for Global Policy and Strategy, tweeted about the news of the Tesla ban: “Well I guess that’s when the Beidaihe meeting will take place and I guess the Chinese government doesn’t trust Tesla.”

Luo Ya and Li Jing contributed to the report.