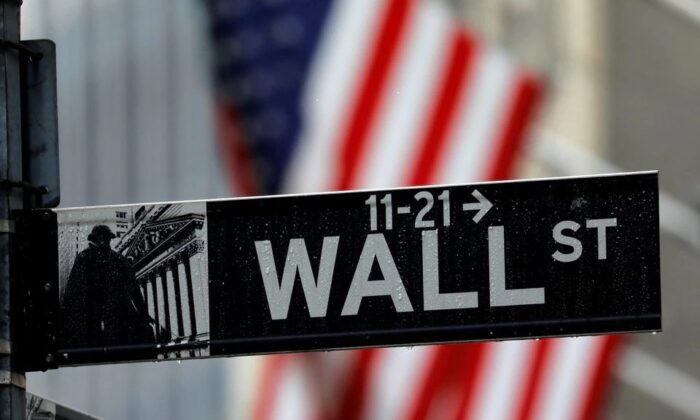 Raindrops hang on a sign for Wall Street outside the New York Stock Exchange in Manhattan in New York City, New York, U.S., on Oct. 26, 2020. (Mike Segar/Reuters)
Infiltrating the West

CCP Strategy Is to ‘Buy Off’ US Elites With Lucrative Deals in China’s Markets: Author Peter Schweizer

The Chinese Communist Party (CCP) relies to a large degree on a strategy of luring powerful figures in American politics and business to extend its influence and avoid the consequences of its misdeeds, according to Peter Schweizer, author of the book “Red-Handed: How American Elites Get Rich Helping China.”

“The strategy is to buy off the elites in the United States by giving them lucrative deals and special access to the Chinese market,” Schweizer told NTD’s “China in Focus” program on March 21. NTD is an affiliate of The Epoch Times.

“It involves political figures, but it also involves corporate executives. And it’s a very effective strategy, and it hamstrings our ability to deal with the threat posed by the Beijing regime.”

The breadth and depth of the cross-section of American policymakers and businesspeople caught up in this web of influence is “scary,” he said. It encompasses the president’s family and the biggest names on Wall Street and in Silicon Valley, he added. Nor can the amounts of money involved be dismissed.

“We’re not talking about small sums of money, we’re talking about deep financial ties, whether it’s the tens of millions of dollars that the Biden family has received from CCP-linked businessmen, or whether it’s the billion-dollar deals, or more, that some firms on Wall Street or in Silicon Valley have received,” Schweizer said, referring to Hunter Biden’s, President Joe Biden’s son, alleged links to Chinese executives and companies.

As an example of a powerful figure wooed by Chinese officials, Schweizer cited the case of Elon Musk, who although born in South Africa is currently CEO of Palo Alto, California-based Tesla.

In the past, Musk was a vocal critic of Beijing over its human rights record, Schweizer said. All that has changed now that Tesla has a factory in Shanghai and reportedly has plans to build another, to which the company plans to outsource high volumes of work from the United States.

In Schweizer’s view, Musk has become “very supportive” of Beijing. Musk, he said, even goes on podcasts to argue that the regime is more responsive to the needs of the Chinese people than the supposedly representative democracy in America is to its own constituents.

“He’s praised the Chinese Communist Party, he talks about the efficiency of the Chinese dictatorship. Of course, it’s very easy to be efficient when you don’t have property rights, human rights, civil rights, those sorts of things, getting in the way,” Schweizer said.

The fact that Tesla now conducts such critical operations in China raised serious concerns about technology transfers, the author argued.

“Beijing has control over Tesla operations in China, which means they have access to Tesla technologies, and they also now have SpaceX secrets as well,” he said, referring to the aerospace and communications firm that Musk founded. Schweizer said he believes that the Chinese regime is in a position to leverage its control over Tesla to gain access to SpaceX technological secrets that will prove immensely valuable as the technology race with the United States progresses.

Musk has tempered his criticisms of CCP human rights abuses because he knows that being too vocal will endanger his own commercial prospects, said Schweizer.

“He’s very outspoken on lots of issues, but he’s not going to be outspoken on China because of this leverage that Beijing has over him,” Schweizer added. “If you look at the statements that are made by Tesla to shareholders, China’s the future of this company.”

The Epoch Times has reached out to Tesla for comment.

Schweizer sees a highly similar dynamic at work in the political realm. Elected members of the Senate and the House of Representatives are required to disclose any financial deals they make with a foreign government, Schweizer noted. But rather than preventing any undue foreign influence, this requirement results in what he calls “corruption by proxy,” whereby a politician will rely on a family member not subject to the disclosure rules to undertake dealings in China.

It matters little to the CCP whether a U.S. politician is a Republican or a Democrat, as long as the politician in question is in a position to give or facilitate access to U.S. capital markets or technology. CCP officials don’t mind too much if American leaders criticize them for their treatment of the Uyghurs of western China as long as those officials are able to get what they want, Schweizer said.

“We’re seeing a large rush of money from individuals linked to the Beijing regime, who are making donations to America’s colleges and universities, and they are attaching strings to those donations,” he said.

Schweizer cited the example of Joe Tsai, a co-founder and executive vice-chairman of Chinese e-commerce giant Alibaba. The massive success of that company, he said, is largely related to the fact that many of its early investors were relatives of top CCP officials.

Nowadays, Tsai, whose net worth Schweizer estimates to be anywhere from $15 billion to $20 billion, makes huge donations to Yale University and other schools, Schweizer noted. At the same time, Tsai makes a practice of going to U.S. campuses and making a case that Americans misunderstand the Chinese regime, which is allegedly responsive to people’s needs.

To further his positive view of the communist regime, Tsai sponsors research and the launch of facilities like Yale’s Tsai Center for Innovative Thinking, which takes its name from Tsai’s father. Schweizer said that the research backed by Tsai counters the negative picture presented in much of the Western media and is decidedly supportive and friendly toward Beijing.

“When you look at what they produce, in terms of scholarship, much of it is apologetic, making excuses for the regime’s misconduct, praising the government for being more lawful, when what we’ve actually seen under Xi Jinping is quite the opposite,” he said.

Institutions like the Tsai Center do not present students with a full and objective picture of what is going in China, and barely any discussion goes on about human rights abuses or the plight of the Uyghurs, Schweizer said.

The Epoch Times has reached out to Alibaba and the Tsai Center for comment.

A further problem is what Schweizer calls “self-censorship” and the bullying of people who dare to speak out about CCP abuses.

As an example, Schweizer mentioned the case of Nathan Law, a veteran of Hong Kong’s democratic movement who has been jailed for his protest activities, who went to Yale University to pursue a masters degree in Asian studies in the fall of 2019. Law’s reception at Yale left him “stunned,” Schweizer said, adding that students from mainland China had heckled the Hong Kong activist.

In many cases, universities fail even to disclose that the money supporting research and institutions on their campuses comes from China, Schweizer noted. Federal law requires such disclosures.