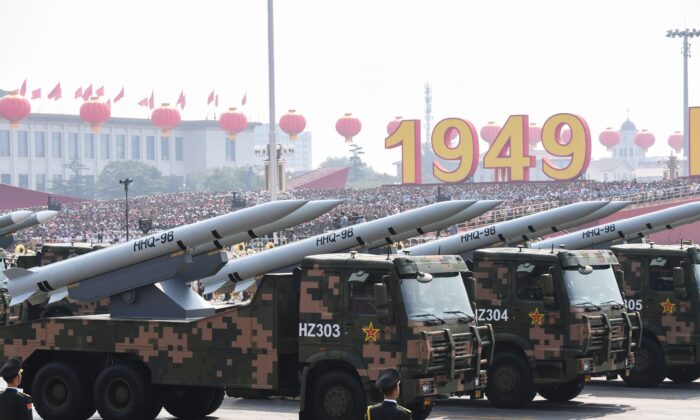 China’s military will “break new ground” in the development of new weapons and other equipment, said Chinese leader Xi Jinping at a recent conference, according to Chinese state-run media.

“Leapfrog development” in military equipment and weapons has critically enhanced China’s strategic capabilities, Xi said, in a nod to the nation’s strategy of prioritizing critical and emerging technologies such as artificial intelligence.

Over the years, the Chinese Communist Party (CCP) has increased efforts to leapfrog the United States, effectively seeking to bypass traditional strategies of development by jumping ahead to newer technologies that would make them irrelevant.

A notable example of this strategy in practice is the reported test of a Chinese hypersonic weapon in July, which could effectively allow the Chinese military to focus on developing next-generation weapons technologies without having to invest in advancing their older, more traditional missile systems.

An “all-out push” to accelerate military modernization and increase self-reliance in production was called for by the vice-chair of China’s Central Military Commission, Zhang Youxia, according to the same report dated Oct. 26.

“The CCP leadership have made claims that they seek to have self-reliance in technology and that it is time to accelerate the modernization of all aspects in their military capabilities to exhibit what they consider to be a world-class military,” said Sam Kessler, a geopolitical adviser at North Star Support Group, a multinational risk management firm.

“The trends indicate that’s the direction the CCP is heading, and their economy and system is being restructured to meet those needs.”

China is currently undergoing an intense period of military modernization. It is rapidly expanding and modernizing its nuclear arsenal, investing in anti-satellite weapons, and testing nuclear-capable hypersonics of a variety that is years ahead of U.S. development.

Xi’s comments reflected China’s current lack of a domestic manufacturing and supply base required to sustain these many efforts, Kessler said.

“In their circumstance, it will be essential for the CCP to unify and consolidate manufacturing capabilities regarding their weapons production processes,” he said.

“Developing a domestic manufacturing base and supply chain for tech like semiconductors is a complicated process for them to perfect.”

Advanced semiconductors are required for the manufacture of China’s most state-of-the-art weapons systems, which makes their production an issue of national security.

But China’s semiconductor industry is not as developed as that of the United States and its allies, Kessler said. For this reason, the Chinese regime has taken to attempts to source such technologies from Western companies, often using quasi-legal means to conceal the relationship between its military and the private Chinese companies that import them.

While U.S. export laws are meant to block advanced semiconductors and other sensitive technology from being sold to foreign actors that threaten national security, including the Chinese military, experts and lawmakers say they have fallen short of achieving its purpose. This is because much of this technology is sold to unassuming civilian Chinese firms that are not covered by the laws, they say, and then redirected to the CCP’s military.

Even Chinese companies sanctioned by Washington have still been able to access some U.S. technology, Republican lawmakers have argued, pointing to some $103 billion worth of export licenses granted from November through April to suppliers of two blacklisted Chinese companies: Huawei and Semiconductor Manufacturing International Corp.

In a bid to block sensitive American tech from falling into Beijing’s hands, the U.S. National Counterintelligence and Security Center recently launched a campaign to warn companies of the CCP’s comprehensive efforts to acquire U.S. technologies that could improve Chinese military capabilities.

Recognizing the growing global pushback against Beijing’s tech ambitions, the CCP is “very interested” in developing home-grown manufacturing capabilities, according to Kessler.

“In fact, they’ve done long-term strategic thinking for tackling that issue such as securing access to minerals and mines that are used for developing such weapons and technology on their own turf,” he said.

Such an increase in domestic production of critical and emerging technologies could mean further rapid advancements in weapons systems that challenge the United States’ own capabilities.

The reported test of a nuclear-capable hypersonic glide vehicle in late July, which allegedly caught the U.S. intelligence community by surprise, is one such example of this.

House Republicans said that the test was likely aided by American technologies obtained by the Chinese military.

General Mark Milley, Chairman of the Joint Chiefs of Staff, referred to the test as a “very significant event,” and likened it to one of the more tense moments of the Cold War.

“I don’t know if it’s quite a Sputnik moment,” Milley said, “but I think it’s very close to that. It has all of our attention.”

The Soviet Union’s launch of Sputnik, the first artificial satellite to orbit the earth, caused mass anxiety and fear that the United States was falling behind its Cold War foe in technological advancement.

The CCP’s efforts to acquire the knowledge and technologies required to expand their strategic advantage, and now its efforts to produce those technologies domestically, could lead to a new arms race, according to Kessler. Much as Sputnik led to the “space race” that saw the creation of NASA, China’s efforts to leapfrog U.S. military hegemony could trigger profound strides in global weapons development.

“That’s a big issue that was being brought up by leaders and thinkers in the U.S. intelligence community circa the 2008-2009 period,” Kessler said. “They assessed that greater global business, financial, and technological competition would lead to a new arms race and a new period of great power competition.”

“We’ve been seeing that evolve the past decade and it’s continuing to have a greater impact on the global strategic and diplomatic landscape.”