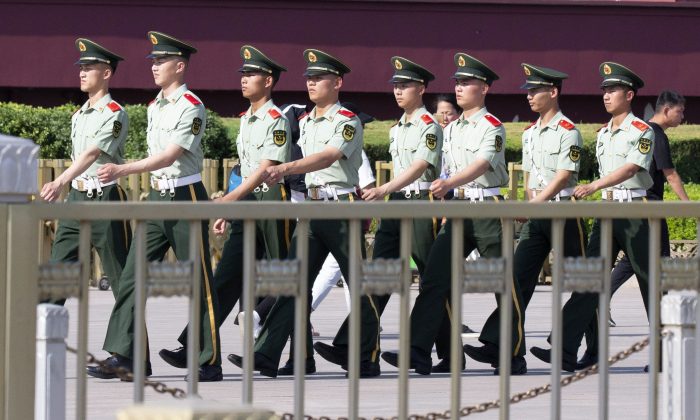 Chinese paramilitary police march past Tiananmen Gate on the eve of the 30th anniversary of the 1989 crackdown on pro-democracy protest in Beijing on June 3, 2019. (AP Photo/Ng Han Guan)
By Crispin Rovere

Xi Jinping has seized control of China’s US$359 billion (AU$496 billion) entertainment industry, seeking to align all cultural influences in China with Communist Party dogma through an “eight-point plan” that directs broadcasters on acceptable role models in entertainment.

The plan released by the Chinese Communist Party’s (CCP) National Radio and Television Administration (NRTA) tolerates no opposition to government doctrine or even alternative sources of societal influence. It also proscribes any celebrity with “incorrect politics,” doesn’t reflect “correct beauty standards,” “flaunts wealth,” “acts in a vulgar manner,” or “speaks or behaves against public order and morals.”

“Xi Jinping is forcing China to look increasingly inwards while needing to solve economic unrest and envy,” explains prominent film producer Chris Fenton to The Epoch Times. “Wealth disparity is a big driver,” he said, “additionally, the CCP wants to reign in the socially progressive and western influence of celebrity culture.”

Fenton, whose film credits include blockbusters such as 47 Ronin, Looper and Ironman 3, has written a book on corporate America’s capture titled Feeding the Dragon: Inside the Trillion Dollar Dilemma Facing Hollywood, the NBA & American Business.

Meanwhile, the CCP has already started a purge of major celebrities and online influencers it has deemed unacceptable.

Popular Chinese actress Zheng Shuang has been fined US$46 million (AU$63.4 million) for ‘tax evasion,’ barred from social media and appearing on television.

Another famous actress, Vicki Zhao, has had all film and television appearances removed from Chinese streaming platforms. Meanwhile, actor Zhang Zhehan was blacklisted after photos emerged of him attending a wedding at Japan’s Yasukuni Shrine, which honours Japan’s war dead, despite the actor publishing a strenuous apology.

China’s music industry has also been shaken, with a ban on effeminate male archetypes.

Boy bands such as TFBoys, Wayv, INTO1, Uniq, Super Junior-M, and Exo-M face being removed from the public eye by the CCP as “feminine male idols,” unless they radically change their image. This is despite some having actively worked to promote the CCP. In 2015, for instance, TFBoys featured in a video of the CCP’s “Young Pioneers,” and as recently as 2020, they were chosen as a brand ambassador for China’s Mars Mission.

More concerning for the industry in China is how the new rules apply to promotion and content. For example, all rankings of celebrities are now prohibited, as is any popularity voting or even celebrity fan clubs. Further, major talent shows such as “Idol Producer,” “Youth With You,” and “Produce 101 China” are all being cancelled at the height of their viewership, with millions tuning in from around the world.

Hollywood has long played a double game to access Chinese consumers; however, the latest crackdown could finally lead to an impasse, Fenton argues.

“It’s becoming increasingly obvious that the risk/reward calculation for China is approaching a tipping point,” Fenton tells The Epoch Times, “I’m hopeful that Hollywood will stop pandering to the CCP.”

While delivering a financial shock, withdrawing from China could drive positive change in Hollywood, he argues.

“Economic uncertainty combined with consumer and political pressures from the west may influence Hollywood to go back to making movies unfettered by censorship and forced narratives,” Fenton said. “If so, other markets around the world will reward such content handsomely.”

Another group being impacted is China’s behemoth of online streamers and influencers.

China’s e-commerce live-stream market reportedly grew 121 per cent in 2020-21, and is now worth an estimated $149 billion and is driven by the country’s growing Gen-Z and millennial-aged consumers.  Top influencers can broadcast to millions of fans, selling products through Alibaba’s Taobao Live, Baidu and JD.com.

The Chinese Ministry of Commerce has now outlined a new “industry standard” to regulate these advertisers, including on how streamers should dress, speak and behave.

However, most professional streamers in China are known as IRL (in real life) streamers. A large majority are female, under 26 years old, and sit in front of a camera to sing, dance and chat about life and attract millions of predominantly male followers.

They receive virtual ‘gifts’ from fans, with some earning as much as US$50,000 (AU$69,000) per month. Top streamers are also usually contracted to large management agencies who provide studios, grooming, training and coaching.

There are also concerns that new government regulations may threaten the industry, as the CCP seeks to further boost marriage rates and curtail online behaviour falling afoul of the Communist Party ideal.

This follows a high profile CCP crackdown on tech entrepreneurs such as Alibaba founder Jack Ma, with other Chinese billionaires engaging in major acts of philanthropy to demonstrate fidelity with what the CCP has termed ‘common prosperity.’

Fenton argues that the crackdown is far from over, noting that the CCP is now targeting anyone who is high profile or wealthy.

“Anyone not in lockstep with the Party agenda could be next, especially if they are high profile and wealthy,” he said.