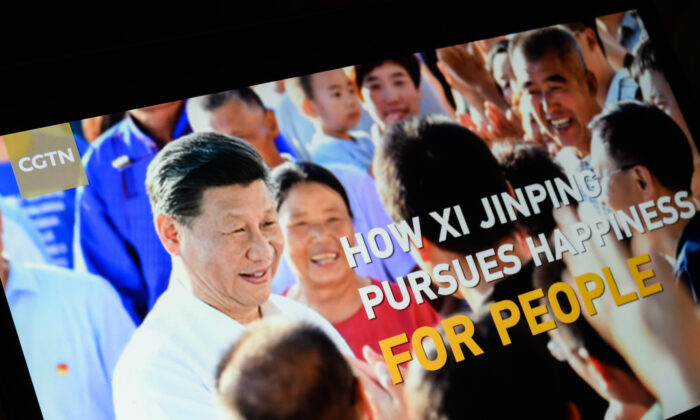 The title screen of a program called "How Xi Jinping Pursues Happiness for People," from the Chinese regime's state-owned broadcaster CGTN is seen in London, England, on Feb. 4, 2021. (Leon Neal/Getty Images)
Thinking About China

The Chinese regime does not recognize dual-citizenship, claiming full sovereignty over anyone holding a Chinese passport.

At the same time, much of the rhetoric of the Chinese Communist Party (CCP) and its leader Xi Jinping is about Chinese blood and the blood of the ancestors, which translates to the CCP believing that it controls or should control foreign citizens of Chinese descent, no matter how far back their ties to China go.

The CCP has always seen the Chinese diaspora as a source of revenue and investment. In more recent decades, it has regarded them as sources of technology transfer, taking part in Chinese-led multinational technology development initiatives. The diaspora have also been crucial in the Belt and Road Initiative (BRI, also known as “One Belt, One Road”), facilitating and smoothing Chinese engagement with the various countries of the BRI. Since 2016, the CCP has held an annual “business conference” for overseas Chinese involved in the BRI.

Since 1999, China has offered two-week long “birthright tours,” which are largely free for those with Chinese ancestry. Over 400,000 foreign-born Chinese have taken advantage of this opportunity.

The Strategic Research Institute of France’s Military College (IRSEM) released a lengthy report on the CCP’s propaganda campaign, including influence and control of overseas Chinese. The IRSEM has uncovered that CCP propaganda programs function through Western think tanks, Confucius Institutes, and the media. The report shows that CCP operations are not limited to the United States, but are also taking place in Taiwan, Singapore, Sweden, Canada, and other countries.

This propaganda push runs parallel to the “wolf warrior” diplomatic style adopted by the CCP last year, whereby individual Chinese ambassadors would attack, through letters to local media or interviews on TV stations, the countries where they are posted. One of the more egregious examples was former Chinese Ambassador to Malaysia, Huang Huikang, who openly supported China’s business interests in the country, while attending events held by the Malaysian Chinese Association (MCA) of the Barisan Nasional (BN) government. This is a clear example of the CCP working through the embassy not only to win the support of the diaspora for Beijing’s economic interests, but also to support political candidates and parties that may later be in a position to champion Beijing’s interests.

The CCP’s three-pronged attack consists of psychological warfare, public opinion warfare, and legal warfare, much of which is enacted through the Chinese diaspora. Psychological and public opinion warfare was evident at the Conference for Friendship of Overseas Chinese Associations and the China Overseas Friendship Association, where Xi reminded the diaspora that the blood of the nation ran through their veins. His message was clear: He and the CCP expect overseas Chinese to be both patriotic and obedient, aiding Beijing in carrying out its objectives.

Another organization, the Chinese People’s Association for Friendship with Foreign Countries (CPAFFC), has its goal aimed “to enhance people’s friendship, further international cooperation … on behalf of the Chinese people, makes friends and deepens friendship in the international … while carrying out all-directional, multi-level and broad-area people-to-people friendship work to serve the great cause of China’s peaceful development and reunification.”

Western governments need to ask themselves whether they should allow such organizations that “serve the great cause” of the CCP to operate freely in their countries. Additionally, it is unclear whether the term reunification means a Chinese takeover of Taiwan, or China annexing the Chinese diaspora living in foreign countries.

In addition to trying to influence overseas Chinese through direct contact and overseas trips and conferences, the CCP has sought to control diaspora media, as well as to recruit students studying abroad to spy on one another. These goals are often achieved through threats and other strong-arm tactics, frequently coming from the Chinese embassy or consulate. In other initiatives, bot-armies are used in online attacks against the Chinese diaspora who criticize the CCP.

The Party’s overseas activities include suppressing dissident movements in diaspora communities, cultivating a cooperative international environment, smoothing the way for a takeover of Taiwan, gathering intelligence, stealing foreign technology, and encouraging investment in China. According to the IRSEM, there is also evidence of China trying to alter the messaging about the Hong Kong protests, as well as spreading disinformation that the United States was the origin of COVID-19.

In decades past, the vast majority of Chinese who have left China never returned. But in recent years, 80 percent of those who went to study abroad have come back to China. This shows that the CCP’s vastly propagandized message that the regime can provide a better life to citizens than can Western nations is succeeding. To promote this, and other messages, the CCP has been building a massive global media network.

One of the largest diaspora media is the website Wenxuecity, which caters to those living in the United States. Founded by Chinese exchange students in 1998, Wenxuecity has been accused of having ties to the CCP, which analysts have largely confirmed. An investigation discovered that about 16 percent of Wenxuecity’s general articles and 25 percent of stories about Hong Kong, the CCP, or Xi Jinping came from Chinese state-run media or those media outlets friendly with the regime.

In addition to influencing diaspora media, the CCP has spent billions of dollars building a global television network that can compete with the BBC and CNN. Meanwhile, Beijing has stepped up its efforts to bring overseas Chinese media under its control. At a meeting of Chinese-language media from over 60 countries, a senior official said that the duty of overseas Chinese media was to “retransmit” news from CCP state-owned media at “important times.”