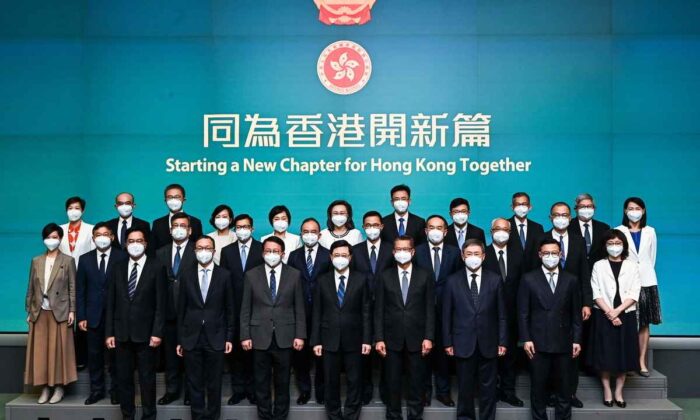 During the “Hong Kong Best News Award” organized by The Newspaper Society of Hong Kong, “Ta Kung Pao,” “Wen Wei Po,” “Sing Tao,” and other pro-Beijing and pro-establishment media had a clean sweep of many important awards.

The award ceremony was held on July 22. Guests of honour included, among others, Chief Executive John Lee Ka-chiu and Lu Xinning, Deputy Director of the Liaison Office of the Central People’s Government. This line-up undoubtedly raised the question of its credibility and the criteria for such “journalism awards.” Details of the awards are shown below.

On another current topic, over 50 percent of the new political assistants appointed to government departments were from pro-Beijing media.

The list of political assistants includes Joyce Li Wai, a former senior reporter for TVB, who was a special assistant to the Chief Executive’s Office of the current Chief Secretary for Administration, Eric Chan Kwok-ki.

Au Yeung Man-sin, a former reporter of Wen Wei Po, was appointed political assistant to the secretary of the Housing Bureau.

Regarding the fact that more than half of this year’s political assistants are from the media industry, Joseph Lian Yi-zheng, a Hong Kong scholar and media worker, said in an interview that the job of political assistants is merely for “political makeup.” They are mainly responsible for answering the media and managing public relations issues, including attending public meetings with the Secretary. There they flag reminders to the Secretary on what and how to respond to outside questions and distribute the news afterward.

Lian pointed out that these are familiar news and public relations work areas, so there was no lack of such media workers in all past political assistant positions. Lian said, “There are no “non-pro-Beijing” media anymore in Hong Kong. It makes no sense to continue emphasizing pro-Beijing media’s thinking. They can’t do anything. Because they will only listen to their bosses.”

Lian recalled that the CCP started planting pro-Beijing elements, or underground party members, into the government, in the 1950s,

Whether or not they choose bureaucrats with a pro-Beijing background, there are already plenty of “red” members within the government. He believes that from this list of the new appointees, no doubt many of them are supported by the leftist groups.

He said that since 2019, the reputation of the Hong Kong government has turned from bad to worse and is still on the way down. With the CCP’s international reputation getting increasingly notorious, too, the whole team of this new government could only follow the instructions of their bosses and will never be able to accomplish any of their ambitions.

The government is unable to attract talent. Dr. Chung Kim-wah, deputy chief executive of the Hong Kong Public Opinion Research Institute (HKPORI), told the Epoch Times that there are good reasons why the government has difficulty attracting capable talent.

In the past, most political assistants were from the media, and they were all candidates with good track records and reputation in the industry. At least they had produced something in the press that did create a certain degree of long-lasting impression.

He believes that since the Hong Kong government “politically censored everything,” it is not surprising only pro-Beijing elements could be accepted for employment.

Chung also questioned the absolute need for political assistants. For a long time, he had always believed that political assistants are dispensable. To date, he found almost none of them succeeded in being “upgraded” to more senior posts in the hierarchy. Most of them “worked in that post for a few years, made a small fortune, and then were completely forgotten.”

The pro-establishment and pro-Beijing media took a clean sweep during “The Best News Award in Hong Kong, 2022″ presentation ceremony organized by the Newspaper Society of Hong Kong.

Hong Kong Ta Kung Wen Hui Media Group and its subsidiaries, “Ta Kung Pao,” “Wen Wei Po,” and “Lion Rock Daily,” have achieved the best results over the years, winning a total of 23 awards. These include the exclusive report award winner, runner-up, and so on.

The “Sing Tao Daily” and its subsidiaries, “Headline Daily” and “The Standard,” also won a total of 23 awards. Among them was the winner of the Best News Reporting Award.

The Hong Kong edition of “China Daily,” funded by the Propaganda Department of the Central Committee of the Communist Party of China, won 10 awards.

Ronson Chan Long-sing, the chairperson of the Hong Kong Journalists Association, pointed out that with the disappearance of the more progressive media, it is not surprising that the pro-establishment media will take over the whole media business.

People in the media industry know that the Newspaper Society of Hong Kong has always had its own ”unique” judging criteria. But Chan said that even though this situation was expected, it was still highly disappointing.

In his speech at the “Hong Kong Best News Awards” ceremony, Chief Executive John Lee Ka-chiu declared that some people had always used fake news to endanger national security in recent years. He also maintained that the Basic Law guarantees the freedom of the press in Hong Kong.

In the Press Freedom Index published by “Reporters Without Borders” in May this year, Hong Kong ranked 148 out of 180 countries and regions.

The press freedom index was 41.64 points, a new low since Hong Kong’s sovereignty handover. It represents a drop of one more level from “Press Freedom Problem Significant” to “Difficult Press Freedom Situation.”

Under the current repressive political environment, media organizations were forced to close.

The Hong Kong Foreign Correspondents’ Club (FCC) also suspended the 25-year-old Human Rights Press Freedom Awards this year to avoid touching the NSL “red line.” Because of this, the FCC had been questioned by outsiders as performing self-censorship.

According to the website of the Hong Kong FCC, winners of the last “Annual Human Rights Press Award” in 2021 include the discontinued “Apple Daily,” Radio Television Hong Kong (RTHK), “U-Beat Magazine” of the Chinese University of Hong Kong, and some Internet media such as Initium Media, DB Channel, and the likes.