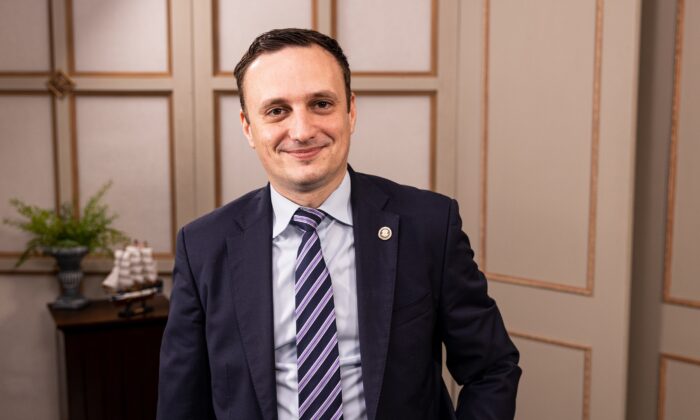 Andrew Thornebrooke
Reporter
Andrew Thornebrooke is a reporter for The Epoch Times covering China-related issues with a focus on defense, military affairs, and national security. He holds a master's in military history from Norwich University.
View profile
Follow
and Jan Jekielek

A former Pentagon official has warned that the Chinese Communist Party is sending people to infiltrate American businesses. In addition, the Department of Defense needs to do a better job of working with the tech industry to prevent China from achieving dominance in the field of artificial intelligence, the former official said.

“The fact is, the Chinese Communist Party is really sending a lot of people to our universities and to our most innovative companies,” said Nicolas Chaillan, the former chief software officer for the U.S. Air Force and Space Force. “And there is a very big risk of exfiltration of data from within.”

“Insider threat is probably the most underestimated threat of all these top organizations on the commercial side,” he added.

The US is losing the #China #AI battle & soon it'll “pass the point of no return,” says former Pentagon software chief @NicolasChaillan. Tonight, he breaks down what went wrong & how the US can still turn the tide.

The comments were made during an appearance on EpochTV’s “American Thought Leaders” program, following Chaillan’s highly publicized resignation as the Pentagon’s first chief software officer.

Chaillan said that a key issue in mitigating insider threat in the future would be striking a balance between an appropriate amount of caution regarding those with ties to the Chinese regime, while still maintaining America’s democratic values.

“It’s a real issue, and there’s not many solutions,” Chaillan said. “You don’t want to start saying ‘we’re not going to allow these people to contribute to society.’ We need those talents.”

To that end, Chaillan said that a key factor in securing American industry would be working to effectively sever U.S.-based workers’ dependency on and ties to the Chinese Communist Party (CCP). Current U.S. policy prohibits the immigration of CCP members to the United States.

“If they’re willing to come and make a difference, they can actually be great assets to by providing more insights about their countries,” Chaillan said. “So, I think the solution would have to deal with how do we help them bring their families and try to remove these dependencies or these kind of side effects and risks that could be spreading rapidly. You have to be proactive.”

“At some point it’s a gamble, but there is more risk not doing it sometimes than doing it.”

Chaillan also said that the CCP’s ability to control China-based companies and leverage their technologies was a key factor in his decision to resign from the DoD.

“China is taking off, leading the pace, by mandating their companies to partner with them,” Chaillan said. “That’s been a tremendous challenge and, at some point, I had no choice but to raise the alarm because we are seeing that we’re losing this battle.”

“China is leading right now, they’re already leading in many of those fields because of the adoption of the technology from their companies. That’s the difference.”

Chaillan explained that a lack of transparency between the Pentagon and the private technology sector was driving down the industry’s desire to work with government, and that an inability to leverage private sector tech was hamstringing U.S. efforts to compete with China.

“At the end of the day, the U.S. companies are all leading against China, but we [the DoD] do not have access to that technology,” Chaillan said. “So that puts us behind because, effectively, we’re left not being able to partner and competing at the same time with a massive country with 1.5 billion people that are not waiting for us to wake up.”

US Tech Collaboration With China

That lack of communication and the at times hostile culture towards the military in big tech firms have become something of a problem in recent years.

Perhaps the most notable example of such was when Google opted not to continue a government contract that would have improved the accuracy of drones by leveraging AI and big data, but continued to develop AI resources that were known to benefit the CCP.

The move, and others like it, were roundly criticized as an effective collaboration between the CCP and its military wing, the People’s Liberation Army.

Numerous companies including Apple, Google, IBM, and Microsoft all still maintain AI research laboratories in mainland China, where the CCP can leverage national security laws to compel those companies to hand over trade secrets at any time.

Security experts have since called for a ban on AI transfers to China to help mitigate the risk posed to the United States by such policies, but Chaillan said that what is really needed is a more serious vetting of who is working in tech, and a renewed dedication to developing results-driven platforms in the military.

“We have to pay attention to who is working for some of these companies,” Chaillan said.

“But what’s very important is we have to stop funding reports. We have to ask Congress to stop continuously going back to DoD and asking the department to invest more money writing reports.”

“We need actions. We need outcomes. We need tangible value to the warfighter.”

To that end, Chaillan’s time at the Pentagon included developing and deploying a working model for the Joint All-Domain Command and Control (JADC2), an inter-service network that would combine sensors from across the Air Force, Army, Marines, Navy, and Space Force.

The unexpected cancellation of funding for JADC2, which was described as “best of breed” by Air Force officials just months ago, was a key factor in Chaillan’s departure from the DoD.

Still, though Chaillan believes that the window of opportunity is quickly closing for the United States to avoid losing the AI war with China, he maintained that not all hope was lost.

“I don’t believe that we have lost,” Chaillan said. “What I said is that if we don’t act now, and don’t wake up right away, and not in five to 10 years from now like some of the Pentagon reports are saying, but if we don’t take a stand now and take action, we have no fighting chance in succeeding 10 to 15 years from now.”

“The velocity of adoption of AI compounds over time so, effectively, you’re going to be at a situation at some point where you pass the point of no return. You will not be able to catch up.”

Accordingly, Chaillan said that the DoD must do more to encourage innovative thinking and risk-taking among its ranks, as well as to increase transparency with its private-sector contractors.

“Well, you know, I think that the issue is there is no reward for taking risks,” Chaillan said. “On the commercial side, if you do good you get bonuses, you get credit, right? In the government, it’s actually safer not to take [risks], because you have more chance of rising up if you don’t make noise, even if you end up having a large program that fails.”

“There’s no one held accountable when something goes wrong,” Chaillan added. “Effectively, when something is going to go wrong, it’s going to be most likely classified, and we can’t talk about it.”

When asked to comment on Chaillan’s remarks, the DoD referred The Epoch Times to comments made by press secretary John Kirby during a press conference on Oct. 12.

“[Secretary of Defense Lloyd Austin] was very clear about our concerns about China’s desires to advance in this field and he’s focused and we still remain focused on advancing AI capabilities in a responsible way, in close partnership with industry and academia and building a digitally talented and capable workforce here for the Department,” Kirby said.

“What I can tell you is that we recognize the importance of AI as a technology and as a capability and the Secretary has spoken about this and we have invested quite a bit of effort and energy into making sure that we can advance AI technology in a responsible way.”