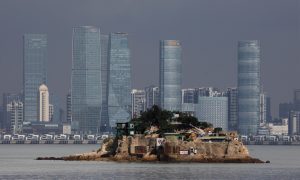 Tang Chunfeng, the former commercial counselor for the Chinese Embassy in Japan, said in Hong Kong recently that a war could break out between China and Japan this year. The remark followed on the heels of Chinese General Zhu Chenghu’s speech on the use of nuclear weapons against the United States. Former Beijing University professor Yuan Hongbing said that Tang’s speech proves again that the CCP’s turn toward fascism presents the most urgent danger for humankind. The danger is no less than before World War II.

On August 10, Tang Chunfeng, who now works for the Department of Commerce, said in Hong Kong that a military clash could erupt between China and Japan by the end of this year. He fears that Japanese Prime Minister Koizumi, faced with a domestic political crisis, “is bound to provoke a dispute with China, playing on the tensions over the disputed ownership of the East Sea oil and gas fields.”

Tang said, “On the issue of resolving the Sino-Japanese dispute over the East Sea, I am the least optimistic person in China. Though many people take it lightly, on the contrary, I believe China and Japan will fight over it before this year’s end.”

Tang pointed out three potential directions the East Sea conflict might take: The Sino-Japanese relationship would deteriorate; both sides would make compromises, or neither side would yield, and the conflict would become long-term. In any of these three likely scenarios, a military conflict would be a possibility.

Tang made this statement on August 10, when he was interviewed by the Chinese Commentary news agency, which has official Chinese connections. After former Minister of Defense Chi Haotian’s speech on using biological weapons to attack the United States was published on the Internet, Zhu Chenghu, a major general in the People’s Liberation Army, threatened the use of nuclear weapons. The threat has caused a great disturbance. A Hong Kong newspaper described Tang as a senior expert on Sino-Japanese relations. Given the timing of Tang’s statement, it has attracted widespread attention and concern.

Earlier this year, there were large-scale anti-Japanese parades in many places throughout China, including Harbin, Baoding, Chengdu, Changsha, Hefei, Wuhan, Shanghai, and Beijing. Police officers even cleared the way for the April 9 anti-Japanese parade in Beijing, which indicates that the CCP supported these demonstrations. It was only after fear arose that the protests might get out of hand or might shift the focus to internal targets, that the CCP pulled the plug on all anti-Japanese parades.

Former Beijing University law professor Yuan Hongbing, who recently obtained a protection visa from Australia, claimed that Tang’s Sino-Japanese war statement is yet another proof that the CCP is a completely fascist regime. The CCP has already decided to take “emergency measures” (common code for violent action) in mainland China to resolve the general political, economic, and social crisis.

Regarding the East Sea oil field dispute between China and Japan, professor Yuan made an analogy to the CCP’s belligerent stance toward Taiwan: The CCP’s purpose in declaring war on Taiwan is not really to contest Taiwan’s sovereignty. Similarly, the concern shown for the Sino-Japanese relationship is not to protect China’s interests. For example, in the Diaoyu Island dispute, the CCP government actually created difficulties for the non-government organized activities while defending the island. Many defenders of Diaoyu Island were grief-stricken over the incident.

For another example, the CCP has given up the right to claim compensation for the Sino-Japanese war, during which 20 million Chinese perished. With a single sentence, the CCP dismissed the trauma and grief felt by the Chinese people.

The fact is the CCP has always been conciliatory toward Japan. Then why is there concern that war may erupt over such a seemingly small issue as the ownership of the East Sea oil fields?

Professor Yuan suggested that the CCP would seize upon this opportunity to move even further towards a completely fascist state. Yuan added that the CCP now wants to maintain its despotic reign by dragging China and the entire world into war. The most urgent danger facing humankind at present is the possibility that the CCP will launch a local or even a world war in order to maintain its rule.

Professor Yuan calls attention to the parallel between the current world situation and the one that existed just prior to World War II. He hopes that all politicians with foresight and wisdom around the world will clearly realize the danger of a fascist state in China. The Chinese people should also clearly realize that should the CCP cause another world war, it would be a disaster that would rival the famine that occurred during the Great Leap Forward. That tragedy killed over 40 million Chinese.